512 Hours: a new durational performance by Marina Abramovic for 64 days during this summer. This time there are no rules, there is no formula, just the artist, the audience and a few, simple props in the empty. Centred around an augmented and appended version of the new multi-screen video work Ribbons, Ed Atkins's exhibition transforms the gallery into a submersive environment of syncopated sounds, bodies and spaces. 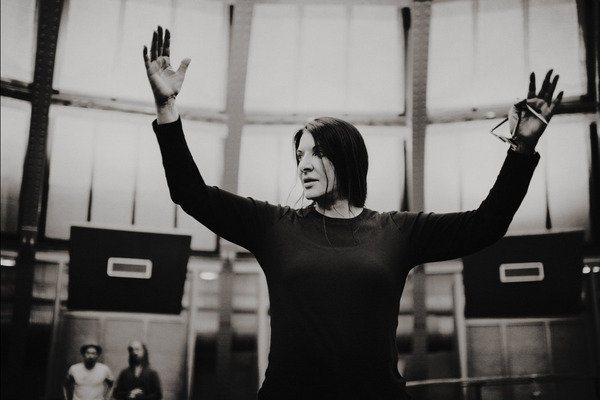 In a unique work created for the Serpentine, the internationally acclaimed artist Marina Abramović will perform in the Gallery for the duration of her exhibition: 10am to 6pm, 6 days a week – for a total of 512 hours. Creating the simplest of environments in the Gallery spaces, Abramović’s only materials will be herself, the audience and a selection of common objects that she will use in a constantly changing sequence of events.

On arrival, visitors will leave their baggage behind in order to enter the exhibition: mobile phones, cameras and any other electronic equipment may not accompany them.

Marina Abramović (b. 1946) is a pioneer of performance as an art form, using her own body as subject and object, she has consistently pushed the physical and mental limits of her being.
512 Hours is the first major performance by Abramović since her monumental piece The Artist is Present, at the Museum of Modern Art, New York in 2010, in which visitors were invited to sit in silence opposite the artist and gaze into her eyes for an unspecified amount of time. Abramović performed this work every day for three months.

Julia Peyton-Jones, Director, and Hans Ulrich Obrist, Co-Director, Serpentine Galleries, have said:
“Incredibly, this is the first time a public art gallery in the UK has staged a durational performance by Marina Abramović who, since the early 1970s, has done more than anybody to define what performance art is. With a simplicity that harks back to her earliest solo performances, this time there are no rules. There is no formula. Just the artist, the audience and a few, simple props in the empty, white space of the Serpentine Gallery. Marina requests your presence at the Serpentine th is Summer. And so do we.”

Marina Abramović: 512 Hours. Serpentine Diaries Co-commissioned by The Space Broadcast at midnight from Tuesday to Sunday (13 June - 25 August) on www.thespace.org; www.serpentinegalleries.org; www.illy.com; www.mai-hudson.org
Marina Abramović will record an account of her day, every evening throughout the duration of her performance of 512 Hours. The Serpentine Diaries will trace the fluctuations and developmen ts of her performance piece, which begins with an empty space and unlimited possibilities.

The exhibition by Ed Atkins takes place concurrently at the Serpentine Sackler Gallery, bringing together tw o extraordinary artists from different generations who focus on performance, the body and language.

In the early 1970s, as a young artist in Belgrade, Abramović began exploring the relationship between artist and audi ence. Since 1978 she has conducted a series of workshops with art students, using a series of simple exercises to increase physical and mental awarene ss. Over the course of her career, Abramovic has continued to develop thes e workshops, expanding their content and scope. In the future, the Marina Abramovic Institute will facilitate these experiences to the general public, within its broader mission of being a platform for immaterial art and long durational work.

Marina Abramović was born in 1946 in Belgrade, Yugoslavia. Abramović remained in Eastern Europe until 19 76, when she met the German artist Ulay. The two lived and worked together , travelling and exhibiting throughout Western Europe, the United States, Au stralia and Asia. In 1989 Abramović returned to her solo career in Amsterdam. Since 2001 she has been based in New York City. Her pioneering works of performance art have made her the subject of numerous solo and group exhibitions worl dwide at institutions including Kunsthalle, Vi enna (2012); the Garage Centre for Contemporary Culture, Moscow (2011); Museum of Mode rn Art, New York (2010); Solomon R. Guggenheim Museum, New York (2005). Abram ović’s work was also included in Documenta VI, VII and IX (1977, 1982 and 1992); Venice Biennale 1976 and 1997, with the exhibition of Balkan Baroque earning her the Golden Lion Award for Best Artist.

One of the most prominent artists of his generation, Ed Atkins works primarily with High Definition video and text, exploiting and subverting the conventions of moving image and literature.

Centred around an augmented and appended version of the new multi-screen video work Ribbons, Atkins’s exhibition transforms the Serpentine Sackler Gallery into a submersive environment of syncopated sounds, bodies and spaces. This is his largest solo exhibition in a UK public institution to date.

Ribbons (2014) will have its UK premiere at the Serpentine Sackler Gallery in a site-specific adaptation. Presented alongside installations of text and images, accompanying videos and tourettic interjections, the exhibition will underscore the ambivalent relationship that exists between real and virtual objects; between real and virtual conditions.

“The Sackler exhibition will re-possess some sort of sub-horror genre; the old powder rooms, haunted by the phantom smell of gunpowder, paranoia and anticipation of violence, will emphasise a particularly phantasmatic aspect of Ribbons; the protagonist’s questionable corporeality, their presence, their performance of loss and monstrousness” – Ed Atkins

Sounds from a suite of synchronised projections positioned throughout the Gallery will lead the visitor through the space, with glimpses of song, swells of orchestra, murmuring voices and waves of sub-bass. Ribbons is part musical, part horror, and part melodrama; Bach’s Erbarme Dich and Randy Newman’s I think it’s going to rain today are two of the songs featured. Naked, lonely and misanthropic, the palpable melancholy of Atkins’s Computer Generated avatar hero is ‘rendered’ as HD graphic, troll, voyeur and, perhaps, artist.

Atkins’s work draws attention to the way in which we perceive, communicate and filter information. His videos combine layered images with incomplete or interrupted excerpts of singing, speech, subtitles and handwriting. Working with a specialist in computer generated animation, Atkins exploits the hyperreal surfaces produced by new software systems to create complex, nightmarish environments populated by virtual characters, avatars of ambiguous provenance and desires. Atkins has described the male figure that appears in these works as ‘a character that is literally a model, is demonstrably empty – a surrogate and a vessel’. Despite the emotive music and poetic syntax of the protagonists, their emptiness serves to remind the three-dimensional, warm-bodied viewer of their own physicality.

The experience of the physical body in Atkins’s show will be contrasted with and complemented by the durational performance being undertaken by Marina Abramović, whose exhibition runs concurrently at the Serpentine Gallery.