Concerning Our Present Way of Living. The exhibition is the first to revisit Willats' 1970s socially engaged projects that he made in east London and includes photographs and recordings from the artist's own archive and documents. 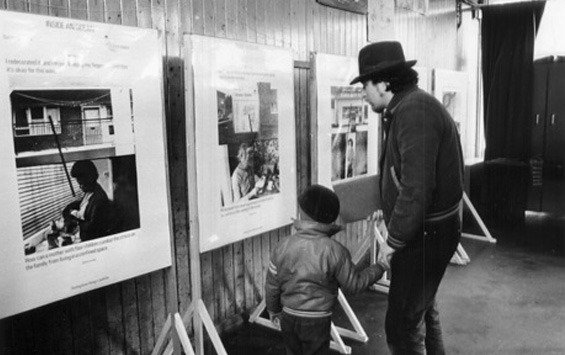 English conceptual artist Stephen Willats (b.1943) was one of the first artists to take work out of galleries and into the world outside, pioneering socially interactive and community engaged art in the 1960s and 70s. This archive display focuses on his exhibition at the Whitechapel Gallery in 1979 that directly related the Gallery to local communities in east London, from the leather industry workers around Brick Lane, to dock workers and residents of the nearby Ocean h ousing estate.

The exhibition is the first to revisit Willats’ 1970s socially engaged projects that he made in east London and includes photographs and recordings from the artist’s own archive and documents from the Whitechapel Gallery, alongside works from Middlesbrough Institute of Modern Art, The Museum of London and Tate.

Since the 1960s Stephen Willats’ work has raised imp ortant questions around the function and meaning of art in society. In 1978, Wil lats spent over a year working with residents of the Ocean housing estate in the b orough of Tower Hamlets, at the time one of the largest social housing estates in E urope, and talked to people about their living conditions. One of the resulting works , Sorting Out Other People’s Lives (1978), explored the intersection between communit y and home life through recordings and photographs of a woman who lived on the estate. An active member of the community, the work depicts her within two c ontexts: her family life with her husband looking after six children, and the organis ations she was involved in, from the Tenants Association to the Citizens Advice Bureau.

The display also includes Inside an Ocean (1979), the project which was installed in the Ocean estate and was part of the Whitechapel Gal lery exhibition. The work involved many residents from the estate in its deve lopment and in its presentation and reception. Featuring photographs, questionnaire s and ‘response sheets’ the work was not complete until visitors had seen both displays, extending the exhibition beyond the Gallery and into the local co mmunity.

Other highlights from the display include The Place of Work (1979), resulting from conversations with people employed in factory work shops producing leather garments around Brick Lane and Working within a Defined Context (1978), developed from photographic documentation made in t he West India Dock just at the moment that it was winding down for its re-devel opment and included tape recordings of dockers discussing their working proc esses.

Stephen Willats was born in London in 1943. His grou ndbreaking practice includes a diverse range of disciplines from cybern etics and communications theory to computer technology. He studied at Ealing School of Art (1962–3), began editing and publishing Control Magazine in 1965 and in 1972–3 was Director of the Centre for Behavioural Art in Londo n. Solo exhibitions include: 4 Inseln, in Berlin, National Gallery, Berlin, (1980), MetaFilter and Related Works , Tate Gallery, London (1982), Changing Everything, South London Gallery (1998), How the World is and How it could be, Museum für Gegenwartskunst, Siegen (2006), From my Mind to Your Mind , Milton Keynes Gallery (2007), Assumptions and Presumptions , Art on the Underground, London (2007), In Two Minds, Galerie Erna Hecey, Brussels (2010), COUNTERCONSCIOUSNESS , Badischer Kunstverein, Karlsruhe, Germany (2010). Control. Stephen Willats. Work 1962–69 , is currently on display at Raven Row, London, until 30 March 2014 and Representing the Possible is at Victoria Miro, London, from 13 March to 17 April 2014.