New Ways of Doing Nothing

The group exhibition devotes itself to a form of artistic production that opposes activity, doing and manufacturing and instead gives an affirmative slant to forms of doing nothing, of refraining or a tautology. Here, refraining from something not only leads to a critical moment but also a creative one. Works of Alejandro Cesarco, Natalie Czech, Claire Fontaine, George Perec/Bernard Queysanne, Superflex and many others. 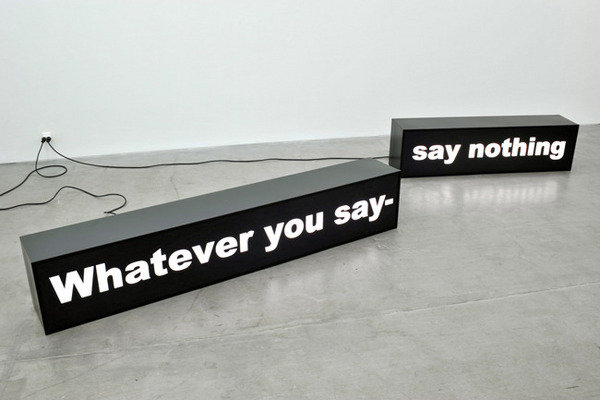 Productivity and growth are the philosophical premises of the present day. Working processes are being optimized to increase efficiency, working hours are being deregulated until the distinction between work and leisure time disappears. Artistic work seems to follow other criteria, but in this field too professionalization and self- optimization are on the rise. But what would happen if ‘doing nothing’ or ‘inaction’ were to become a source of inspiration for a refusal to produce.

New Ways of Doing Nothing devotes itself to a form of artistic production that opposes activity, doing and manufacturing and instead gives an affirmative slant to forms of doing nothing, of refraining or asceticism. Here, refraining from something not only leads to a critical moment but also a creative one. New Ways of Doing Nothing – the title derives from Swedish artist Karl Holmqvist – focuses on positions in contemporary art in which ‘doing nothing’ generates its own potential with respect to the requirements (and impositions) of a society that concentrates on activity and productivity: for example in Natalie Czech’s variation on a diary entry by the Russian avant-garde poet Daniil Charms, who in 1937 noted: “Today I Wrote Nothing. Doesn’t Matter.”

In his short story Bartleby, the Scrivener, published in 1853, Herman Melville presents a prototype of refusal or noncompliance. Bartleby replies to all the tasks he is given with a polite but decided “I would prefer not to.” In the course of the novella, which runs to little more than eighty pages, he lapses into a state of total inaction and becomes a figure, both stoic and passive, who represents existence outside societal norms. Bartleby is a key figure of the modern, whose rhetoric of a passive negativity is of essential significance for the self-image of our society, which is based on work and progress.

The Danish artists’ group Superflex have created a video work entitled This Working Life in which they asked a hypnotist to introduce members of the public to the world of work. Something that might seem completely familiar – working with a clock in the background – becomes a strange, almost traumatic activity that can only be understood when the unconscious is activated. A further key work in the exhibition is the film A Man Asleep (Un homme qui dort) by George Perec and Bernard Queysanne. This film version of the story of the same name by Perec, written in 1972, depicts the life of a student in Nouvelle Vague style: one day he decides not to attend an exam and, moreover, not to do anything else from this moment on. Accompanied by a suggestive voiceover, the nameless student wanders through an empty Paris in search of a possibility of escaping all the demands of society. A Man Asleep was written by Perec as a direct answer to Melville’s Bartleby and has lost nothing of its relevance.

Other works in the exhibition take as their theme an artistic work that, even as it reflects on the question of what it means to engage in artistic activities, is already creating work. In Lasse Schmidt Hansen’s series of photos Making Things, for instance, the artist constantly rearranges the furniture in his studio without directly becoming productive. By way of contrast, Edith Dekyndt transposes the signal of a “sleeping” computer in stand-by mode into a closed-circuit installation that creates a suggestive aesthetic of inactivity, but also reminds us that a pure “off” no longer exists.

New Ways of Doing Nothing devotes itself to a form of artistic production that opposes activity, doing and manufacturing and instead gives an affirmative slant to forms of doing nothing, of refraining or a tautology. Here, refraining from something not only leads to a critical moment but also a creative one.

Cristina Ricupero is a freelance curator and author and lives in Paris. She has curated numerous exhibitions, for instance in Schirn Kunsthalle, Frankfurt am Main, in Witte de With, Rotterdam, and in the Stedelijk Museum, Amsterdam.

Vanessa Joan Müller is Head of Dramaturgy at Kunsthalle Wien.