Exploring the ways in which artists have been influenced by their predecessors, the exhibition goes beyond a comparison of imagery to look at the affinity between the artists' stylistic approach and painterly process. Works of Francis Bacon, George Condo, Martin Kippenberger, Sigmar Polke, Richard Prince, Andy Warhol, Velazquez, Picasso, Baselitz, Ernst, Goya, Munch and de Chirico. 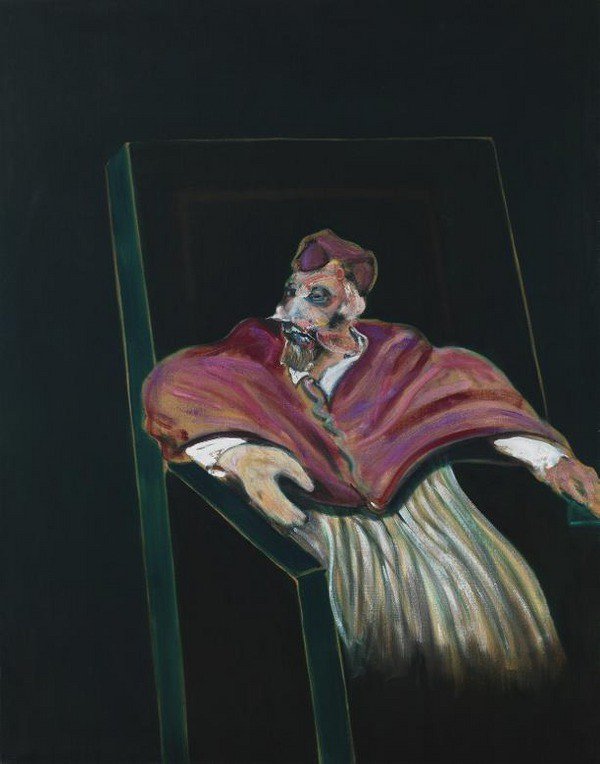 Skarstedt London is delighted to announce In Homage, an exhibition of seminal artworks by modern and contemporary masters including Francis Bacon, George Condo, Martin Kippenberger, Sigmar Polke, Richard Prince and Andy Warhol, with paintings referencing masterpieces by Velázquez, Picasso, Baselitz, Ernst, Goya, Munch and de Chirico. Exploring the ways in which artists have been influenced by their predecessors, In Homage goes beyond a comparison of imagery to look at the affinity between the artists’ stylistic approach and painterly process.

Last exhibited in London at the Tate Gallery in 1962, Francis Bacon’s Study for a Pope III, 1961 returns to the subject of Velázquez's Portrait of Pope Innocent X, 1650, a theme first explored by Bacon in 1950 of which he said: “I think it is one of the greatest portraits that has ever been made, and I became obsessed with it”. Bacon originally conceived this work as part of a polyptych of six paintings. In this study, perhaps more than in any other, the contradiction of man’s mortality versus the power of the Papal office is best conveyed by the frailty of the diminished figure engulfed in his throne and the splattering of paint depicting his facial contortions. Like Velázquez before him, Bacon’s achievement lies in his ability to go beyond a formal likeness and to capture the essence of the man himself.

Looking to the European tradition of painting and representation of female beauty, George Condo’s Portrait of a Woman, 2002 is influenced by Picasso’s Neo-classical style drawings and paintings from the 1920s. The carefully delineated physiognomy of the woman, together with the placement of the figure, echoes Picasso’s emphasis on the strength of the line and the monumentality of form. In his body of work Condo frequently references other artists however, it is to Picasso that he most often returns. While this portrait of a woman clearly pays homage to this periodof Picasso’s painting, Condo introduces stylistic elements, such as the woman’s mismatched eyes, that are uniquely and instantly recognisable as his own: “the only way for me to feel the difference between every other artist and me is to use every other artist to become me.”

A key part of Sigmar Polke’s oeuvre is his assimilation of other artists’ work and none more so than Goya, as is clearly demonstrated in So sitzen Sie richtig (nach Goya und Max Ernst), [This Is How You Sit Correctly (After Goya and Max Ernst)], 1982. Deriving its name from Goya’s Ya tienen asiento (Los Caprichos, no.26), 1799, this painting also appropriates imagery from Max Ernst’s Une semaine de bonté, 1934. Embracing the irony in Goya’s Capricho, the principal motif of the women with upside-down chairs on their heads lends a playful and absurdist tone to Polke’s painting. The socio- political themes in the work of Goya resonated particularly for Polke, who also drew on cultural and political ideas to inform his work. Through his skillful superimposition of borrowed imagery, Polke also references Ernst’s use of appropriation of images taken from Victorian popular novels in Une semaine de bonté.

Inspired by de Kooning’s celebrated Woman paintings from the 1950s, Richard Prince’s Untitled (de Kooning), 2008 presents a montage of fragmented body parts pulled directly from catalogues and books on de Kooning as well as other printed materials such as vintage porn. Significantly Prince’s complex process of selection and appropriation was first applied to another artist’s work in this series of paintings, reflective not only of his admiration for de Kooning, but also of the shared visual strategy employed by both artists: de Kooning famously overlaid the smiling mouth from a cigarette ad onto one of his early Woman paintings. Characteristic of Prince’s combination of high art with debased sleazy imagery, Untitled (de Kooning) is both a homage and a desecration of the work of his idol: “some people worship at the altar - I believe in de Kooning.”

Martin Kippenberger’s inverted self-portrait Untitled (from the series Hand-Painted Pictures), 1992 references the work of his German contemporary Georg Baselitz, to deride the idea of the artist as a heroic figure. One of the fathers of Neo-expressionism, Baselitz represents the establishment of German art. In this self-portrait Kippenberger positions himself as a rotund anti-hero against the heroism of scale and theme found in Baselitz’s paintings, to parody his own persona and image as an artist and to mock the age-old tradition of self-portraiture. As in his Preis [Prize/ Price] paintings, where the play on words is a commentary on the commodification of painting, the letters ‘BAZ HIT’ running along the top of the canvas are a deliberate pun on the name and the ‘hit’ market presence of Baselitz. The wry self-portrait in athletic shorts also makes visual reference to David Douglas Duncan’s iconic photograph of Picasso in his underwear.

In Disquieting Muses (After de Chirico), 1982 Andy Warhol takes as his subject matter de Chirico’s most iconic work, to pay homage to the predecessor of his own aesthetic of self-appropriation. Giorgio de Chirico first painted Disquieting Muses during his seminal Ferrara Period (1915-1918). He subsequently made several copies, emphasising that the idea expressed within the painting was of value not the object itself, therefore he saw no problem in making reproductions of his own works. Through his appropriation of de Chirico’s most famous painting, Warhol emphasizes the affinity between the artists in their stylistic approach: “de Chirico repeated the same images throughout his life. I believed he did not only do it because people and dealers asked him to do it, but also because he liked it and viewed repetition as a way of expressing himself. This is probably what we have in common.”

Taking as its focus six select paintings, In Homage demonstrates the importance of the relationship between artists and the influence this has on the formation of their individual style and creative process. As Picasso so eloquently said: “We, the painters, are the true heirs, those who continue to paint. We are heirs to Rembrandt, Velázquez, Cézanne, Matisse. A painter always has a father and a mother; he doesn’t emerge out of nothing.”

About Skarstedt
Skarstedt was founded in 1994 by Per Skarstedt to mount historical exhibitions by contemporary European and American artists that had become the core of his specialty in Sweden and New York in the late 1980s and early 1990s. Skarstedt’s New York gallery is located on 79 Street and Madison Avenue in an historic building, formerly the renowned Rosenberg Gallery. In October 2012, Skarstedt opened its London space on Old Bond Street with the inaugural exhibition Andy Warhol: The American Indian. Skarstedt opened its 3rd space in Chelsea, New York, on May 8 th 2014 with the exhibition Yves Klein and Andy Warhol: Fire Paintings and Oxidation Paintings.

Skarstedt’s programme reflects the gallery’s established area of expertise whilst also expanding its focus to include museum-quality, historically researched exhibitions from modern and contemporary masters. Skarstedt’s unique relationship with artists allows it to present exhibitions both on the primary and secondary markets, creating a dialogue between the generations. Skarstedt is committed to sharing both its aesthetic perspective and philosophical approach whilst working with prominent international museums and private collections around the world.