Arts festival to celebrate the reopening of Fort Tilden and recognize on going recovery of the Rockaways peninsula. Featuring solo projects by Patti Smith, Adrian Villar Rojas, and Janet Cardiff as well as an international group show. 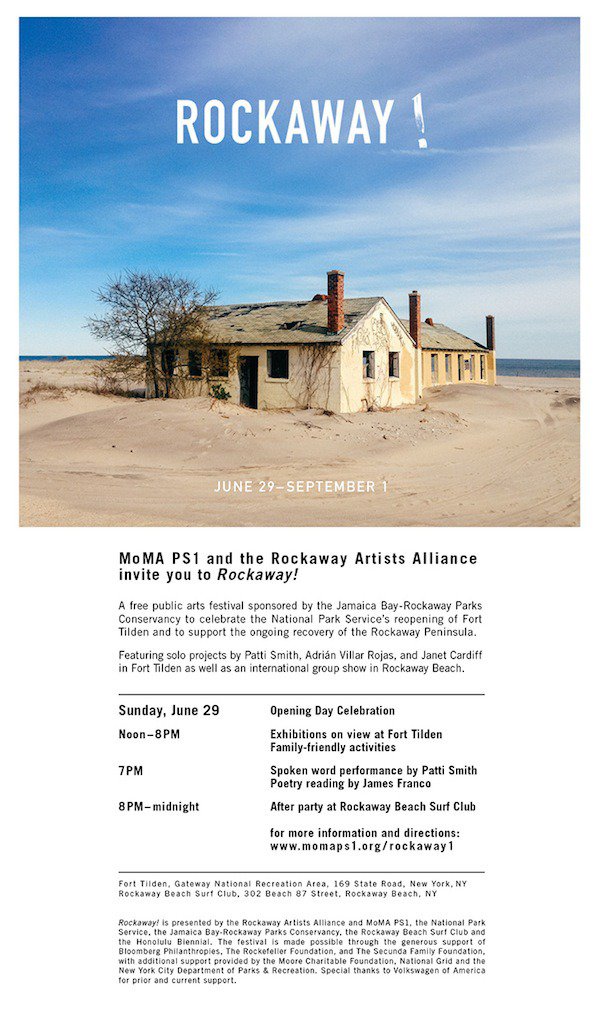 Rockaway!, a free public arts festival sponsored by the Jamaica Bay-Rockaway Parks Conservancy (JBRPC) to celebrate the reopening of Fort Tilden and recognize the ongoing recovery of the Rockaway peninsula, opens June 29 and continues through September 1, 2014.

Invited by the Rockaway Artists Alliance (RAA), an association of artists based in and around the Rockaways, and the JBRPC, MoMA PS1 has assisted and supported the conception of this festival. Hosted by the National Park Service (NPS), which owns and manages Fort Tilden, Rockaway! showcases the natural and historical beauty of Fort Tilden, in which RAA has had a public gallery for the past 19 years.

Rockaway! was conceived by MoMA PS1’s Director, Klaus Biesenbach, in close collaboration with Patti Smith. There will be an additional group show in the Rockaway Beach Surf Club, organized in collaboration with the Honolulu Biennial.

History of the Collaboration
MoMA PS1’s collaboration with RAA and the New York City Department of Parks & Recreation (DPR) began with the VW Dome 2, a temporary cultural and community center the museum constructed on Beach 95th Street in Rockaway Beach following the rescue and volunteer efforts the museum organized in the Rockaways after Hurricane Sandy. Operated through June 30, 2013, the VW Dome 2 was made possible by a long-term partnership with Volkswagen of America.

Given its work on the VW Dome 2, MoMA PS1 was in a unique position to facilitate a coordinated effort between the newly established JBRPC, a public-private partnership with NPS and DPR dedicated to improving the 10,000 acres of public parkland throughout Jamaica Bay and the Rockaway peninsula, and local artists and community groups in the Rockaways. Rockaway! is an encouraging example of the many collaborations that have developed through the challenging process of rebuilding the Rockaways.

The Exhibition
The acclaimed international artist, writer, and musician Patti Smith—a Rockaway resident—conceived a large-scale installation, photography exhibition, and site-specific outdoor installation (The Resilience of the Dreamer) specially for Rockaway! Having witnessed personal belongings of Rockaway residents being destroyed and washed away during Sandy, Smith will install a gilded four-post bed with pure white linens in a long-abandoned building that lacks windows and parts of its roof. The bed will wear down physically, yet remain in place, a symbol of courage and resilience.

In the RAA galleries, an exhibition of photographs taken by Smith over the last several years focuses on objects that were dear to their owners: Robert Mapplethorpe’s slippers, Robert Graves’s hat, Virginia Woolf’s bed, Frida Kahlo’s corset, and William Burroughs’s bandana, among others. The adjoining gallery is dedicated to Walt Whitman and includes books of his poetry that visitors are invited to read. Smith has also placed five granite stones engraved with verses from Whitman’s poetry along the trails of Fort Tilden to mark the far ends of this scenic urban park on the ocean.

In addition, the Argentinian artist Adrián Villar Rojas will present a selection of small sculptures made from unfired clay and straw, inspired by the nests of the tiny Argentinian birds known as horneros. Installed in several locations throughout Fort Tilden, these nests invite local birds to inhabit them, offering a temporary home in this beautiful and fragile environment. These nests—a number of which can be found along the impressive hills and former batteries—also highlight the military history of Fort Tilden, which was built to provide protection against a potential enemy invasion from the ocean.

Thanks to a loan from The Museum of Modern Art, Fort Tilden’s military chapel—which was damaged by Sandy and is now being restored—will showcase one of the highlights from the MoMA collection: The Forty Piece Motet by Janet Cardiff, a spatialized adaptation of a sacred 16th-century motet created by recording each member of a choir individually and giving each voice its own speaker.

The final component of the festival is a group exhibition organized in collaboration with the Honolulu Biennial on the grounds of the newly restored Rockaway Beach Surf Club on Beach 87th Street in Rockaway Beach. Following Hurricane Sandy, the Surf Club was the one of the largest relief centers on the peninsula; their organization facilitated and directed over 5,000 volunteers, with major contributions from MoMA PS1. The exhibition celebrates the efforts of the Rockaway community of surfers and artists in rebuilding their neighborhood.

Partnership
Rockaway! is presented by the Rockaway Artists Alliance and MoMA PS1, the National Park Service, the Jamaica Bay-Rockaway Parks Conservancy, the Rockaway Beach Surf Club, and the Honolulu Biennial. The festival is made possible through the generous support of Bloomberg Philanthropies, The Rockefeller Foundation, and The Secunda Family Foundation, with additional support provided by the Moore Charitable Foundation, National Grid, and the New York City Department of Parks & Recreation. Special thanks to Volkswagen of America for prior and current support.

Fort Tilden
169 State Road , New York is accessible by the Q22 and Q35 buses, the A train/shuttle to 116th St. and weekend ferry service on the American Princess

The Rockaway Beach Surf Club
302 Beach 87th Street is on the A train/shuttle to Beach 90th Street; bus service includes the Q22 and Q52. Parking is limited to on-street.