Monet and the Seine

Impressions of a River. The exhibition reunites several of his works from his famous series of paintings 'Mornings on the Seine' alongside several related, earlier works, demonstrating Monet's lifelong investigation of the visual and expressive potential of light as well as his longstanding attachment to the Seine River. 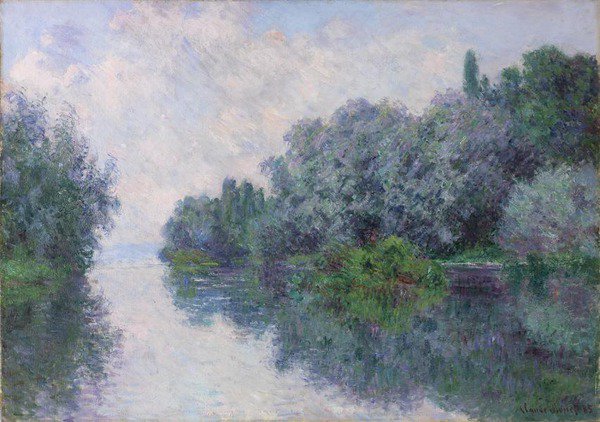 May 6, 2014 (Tulsa, Okla.) Philbrook Museum of Art presents a focused exploration of the work of Claude Monet (1840-1926) in Monet and the Seine: Impressions of a River in conjunction with the Museum of Fine Arts, Houston. This original exhibition reunites several of this master of Impressionism’s works from his famous series of paintings Mornings on the Seine alongside several related, earlier works, demonstrating Monet’s lifelong investigation of the visual and expressive potential of light as well as his longstanding attachment to the Seine River. Co-curated by Dr. Tanya Paul, Isabel and Alfred Bader Curator of European Art, Milwaukee Art Museum and Dr. Helga Aurisch, Curator of European Art, The Museum of Fine Arts, Houston, the exhibition runs through September 21, 2014 at the main Philbrook campus in Midtown Tulsa.

This loosely chronological exhibition of 16 works by Monet brings together both earlier works and several from the original 1896--97 series Mornings on the Seine, which opened to critical acclaim for the sensitive way it documented changing conditions of light and atmosphere. Monet lived much of his life on the Seine River northwest of Paris, an area of the world which he credited as his “studio.” This exhibition traces Monet’s lifelong attachment to the famous French waterway. His early works often include evidence of human activity such as ships, trains, and buildings, while the Mornings on the Seine series showcases Monet’s emphasis on color, light, nature, and the artist’s subjective response to the scene before him.

Monet grew up in Le Havre, a port city at the mouth of the Seine, and although he spent several years in Paris, where in 1874 he spearheaded the group of young artists who came to be known as Impressionists, he chose more often to live outside the capital, in smaller towns on the banks of the river. The French towns of Argenteuil, Vétheuil, Poissy, and finally Giverny, all served as home bases from which the artist explored the surrounding countryside, depicting the fields, villages, and open skies of the region in all seasons, as well as the Seine itself, crossed by road and railway bridges, dotted with pleasure boats, filled with ice floes, or simply glowing with sunlight.

In 1898, Monet exhibited works from a series of paintings entitled Mornings on the Seine to great critical acclaim. Each canvas focused on a single spot on the Seine near Monet’s Giverny home, where he anchored his studio-boat before dawn in order to capture the pale light and almost undefinable colors of the mist-covered river at daybreak. From the moment of their creation, the paintings were highly praised. The painter-journalist Maurice Guillemot, who interviewed Monet in 1897 while he was painting the Mornings on the Seine works, described them as “a marvel of contagious emotion and of intense poetry.” These paintings, the latest and perhaps the most refined and contemplative expression of the serial approach Monet had been using throughout the decade, confirmed the artist’s reputation as the new father of French landscape and brought forth associations with the work of Jean-Baptiste-Camille Corot, whose 1861 work, The Moored Boatman, is included in this exhibition.

By reuniting a selection from this renowned group of paintings, Monet and the Seine: Impressions of a River not only reveals the importance of the series within Monet’s oeuvre, but also delves into the broader political, historical, and artistic significance of the subject in the late 1890s. Seen in the context of Monet’s repeated exploration of the Seine throughout his career, the Mornings on the Seine series emerges as a remarkable combination of tradition and innovation. The paintings carry associations with established French landscape painting as exemplified by Corot and by Charles-François Daubigny, but they update that tradition through their avant-garde status as a series of linked yet distinctive works, each one representing the artist’s individual, subjective response to the scene before him.

“The Seine was a touchstone for Monet,” notes Sarah Lees, Philbrook’s Ruth G. Hardman Curator of European Art. “He chose to live near its banks for most of his life, so it had personal as well as historic and national significance. And each time he returned to the river as a subject, he seems to have seen it differently. By exploring Monet’s vision of the Seine throughout his career – culminating in a focused consideration of the ethereally beautiful Mornings on the Seine series – the exhibition will reveal his knowledge of the traditional foundations of French painting, even as he constantly experimented with new, innovative ways to develop the visual and expressive potential of his art.”

This exhibition, organized by Philbrook during Dr. Paul’s tenure as the Hardman Curator at Philbrook, is part of a larger project focused on Monet and the Seine developed in conjunction with the Museum of Fine Arts, Houston. An accompanying catalog, also titled Monet and the Seine, will debut with the Philbrook exhibition in June. It features essays by both curators, along with contributions by leading scholars of Impressionism Michael Clarke and Richard R. Brettell, and reflects Philbrook’s presentation as well as Houston’s expanded exhibition, which opens in late October 2014. This collaboration came together as an ideal union of new art historical scholarship as well as a celebration of a group of sensitive, exquisite, and timeless paintings by one of the great masters of French Impressionism. “Monet is clearly one of the most significant artists in Western art history,” remarked Rand Suffolk, Philbrook Museum Director. “Consequently, we're excited to reunite these works in this fashion and believe it's an extraordinary opportunity for our community and region.”

Special Exhibition Tickets
To view Monet and the Seine, special exhibition tickets are required at $6 per visitor.
Museum members and youth 17 and younger are free but will need to request tickets via www.philbrook.org in advance or from the front desk upon arrival.
This special exhibition ticket is required during the run of the exhibition including Philbrook Second Saturdays, “Museums on Us” by Bank of America, and other promotional events.

About Philbrook
Rooted in the beauty and architecture of an historic home gifted by the Phillips family 75 years ago, Philbrook Museum of Art has grown to become one of the preeminent art museums across the central United States. Highlights of the Museum’s permanent collection include Renaissance and Baroque paintings from the Kress Foundation, one of the greatest surveys of Native American art anywhere, and growing modern and contemporary collections.

The Philbrook main campus spans 23 acres of grounds and formal gardens, and features an historic home displaying the museum’s permanent collection, as well as an architectural addition with auditorium, restaurant, library, and education studios. The satellite location in downtown Tulsa showcases Philbrook’s modern and contemporary art collections, as well as the Eugene B. Adkins Collection and Study Center of Native American art.