Don't You Know Who I Am?

Art after Identity Politics. New generations of artists interrogate the formation of identities in the world through strategies such as performativity, abstraction, thingness, the logic and aesthetics of the digital, activism, analysis of selfhood from cultural and scientific perspectives or addressing the role of the viewer. 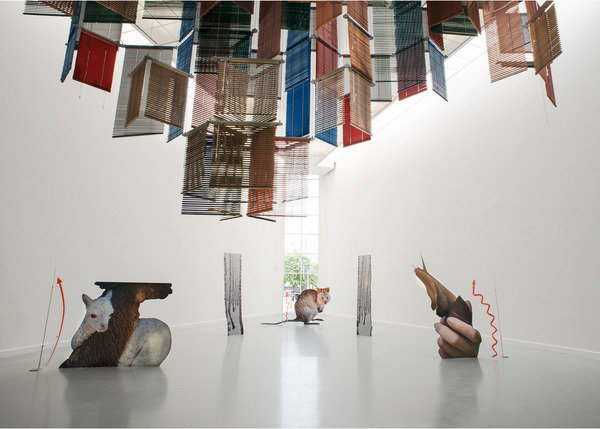 ‘Don’t You Know Who I Am’ is a phrase we might expect to hear from celebrities being refused entry to a nightclub, or politicians trying to dissuade a policeman from giving them a parking ticket and expecting to get away with it because of who they are. In this case it also refers to the fact that many of the artists in the exhibition will be less well-known to a wider audience. This exhibition, on both main floors of the M HKA and in several off-site locations, is intended as a large-scale survey of the modes and means for considering identity and identification.

Various groups in society have, during recent decades, defined themselves along political, economic or social lines such as race, ethnicity, gender or sexuality in order to enhance their visibility and overcome marginalisation. After this established discourse of identity politics, often associated with the art of the 1980s, artists are once again considering notions of identity and what they mean in the contemporary world.

Having outgrown theoretical and visual codes that were too often focused on representations of the self or the body, and that more than anything expressed a desire for social visibility, artists today seem to be more interested in identities (in the plural) as part of an overall understanding of complexity – which the art system has not always been able or willing to accommodate.

New generations of artists interrogate the formation of identities in the world through strategies such as performativity, abstraction, thingness, the logic and aesthetics of the digital, activism, analysis of selfhood from cultural and scientific perspectives or addressing the role of the viewer. These strategies may not always reinforce each other, but artists have not accepted any ban on self-contradiction.

Visual art is still, but perhaps only notionally, an avant-garde in relation to culture and society as a whole. Yet it remains a place for experimentation, and many artists, followed by curators and theoreticians, are asking themselves how they can achieve an ever more nuanced and relevant understanding of what identity means to individuals and their sense of self and how it can be articulated in creative practice. The exhibition will invite and even provoke different perspectives from the artists invited, as well as the audience and other participants in the project, such as writers for the publication or speakers for discursive events.

Don’t You Know Who I Am? – Art After Identity Politics is organised in partnership with AIR Antwerp, which offers residencies in Antwerp to participating artists. The exhibition will be accompanied by a series of discursive activities, including a symposium at Cinema Zuid in Antwerp on 14 June, that will seek to enhance and expand it. It will also include a substantial e-book published in English, Dutch and French versions. They can be downloaded for free from the project’s microsite afteridentity.muhka.be, to be launched in June.

Don’t You Know Who I Am? – Art after Identity Politics is organised by M HKA within the framework of “The Uses of Art”, a project by the European museum network L’Internationale. L’Internationale proposes a space for art within a non-hierarchical and decentralised internationalism, based on the value of difference and horizontal exchange among a constellation of cultural agents, locally rooted and globally connected. Comprising six major European museums: Moderna Galerija (MG, Ljubljana, Slovenia); Museo Nacional Centro de Arte Reina Sofía (MNCARS, Madrid, Spain); Museu d’Art Contemporani de Barcelona (MACBA, Barcelona, Spain); Museum of Contemporary Art Antwerp (M HKA, Antwerp, Belgium); SALT (Istanbul and Ankara, Turkey) and Van Abbemuseum (VAM, Eindhoven, the Netherlands) and associate organisations from the academic and artistic fields.

Maria Taniguchi
The Philippines, born in 1981, lives in Manila

Nastio Mosquito
Angola, born in 1981, lives in Luanda and Lisbon

Pennacchio Argentato
Italy, born in 1979 and 1977, live in London and Naples

On Saturday the 14th of June, M HKA and Contemporary Art Heritage Flanders (CAHF) co-organizeJust Who Do You Think You Are?, a forum in Cinema Zuid in Antwerp.

The programme consists of performances, screenings, keynotes and talks in three acts, with artists participating in the exhibition and invited speakers, and will consider notions from ‘universality’ and ‘populism’, to ‘selfhood’, ‘normality’ and ‘difference’, all in relation to the ‘I word’ of the exhibition subtitle.