The exhibition proposes an image of today's world with the individual at its center. The show features some twenty artists, exploring the modes of resistance and the contradictions of a reality often described as lacking any alternative make themselves felt. 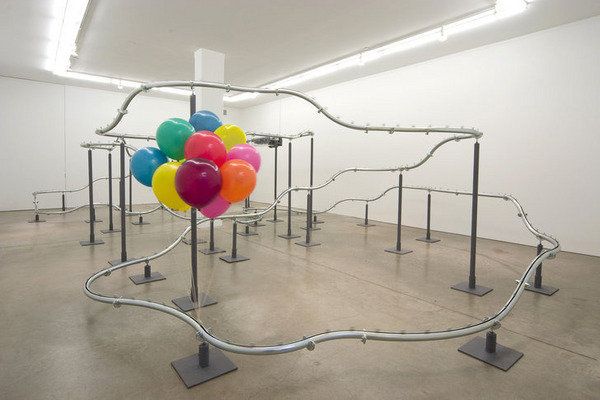 The credo of today's society without boundaries reads "ever faster, ever higher, ever further." In the early 21st century, man, oscillating between euphoria and depression, finds himself confronted with the promising opportunities of a global and virtual world as well as the challenge to constantly improve, optimize, and shape his life more efficiently. The exhibition at the Schirn Kunsthalle Frankfurt on display from June 5 until September 7 focuses on this phenomenon. Based on works by 18 contemporary artists such as Maurizio Cattelan, Peter Coffin, Judith Hopf, Andrea Fraser, Claire Fontaine, Alicja Kwade, Ryan Trecartin, and Daniel Richter, it unfolds an image of a present-day world with the individual at its center. The works on display are not aimed at visualizing the contents of the eponymous epochal novel Infinite Jest by David Foster Wallace. The show rather explores the various demands confronting today's individual, in which the modes of resistance and the contradictions of a reality often described as lacking any alternative make themselves felt.

Set in the near future, Wallace's novel seismographically records possible results and consequences of an event and fun society that presents itself as a performance-oriented society at the same time. The works of art assembled for the presentation of the same name in the Schirn reveal how the present circumstances' consequences and excesses make man revolve around himself almost without end. Which methods and ways do we find or invent to continually optimize and perfect ourselves in order to fulfil the requirements of modern society? The artworks' subjects span from addiction in its various forms, the localization of the self, depression, and the emptying of meaning to absurdity, irrationality, and virtually deadly irony. Visually and conceptually, the presented works shed light on the meaning of the term "hysterical realism" which has been coined for a certain kind of literature some years ago.

"Expressions like quantified self, body hacking, and burnout are endemic in today's media. Absolute optimization and perfection are required from each individual in the global world around the clock. What about the other side and the consequences of this continuous circling of man around himself? The Schirn wants to dedicate itself to these contemporary phenomena in this year's summer exhibition and provide a terrain for the artistic exploration of such issues," says Max Hollein, Director of the Schirn.

Matthias Ulrich, curator of the exhibition: "There has never been so much I. We incessantly revolve around ourselves. And everything around us also goes on this roundabout. Each individual has to cope with what happens in today's world, has to find his place as a person, or even develop survival strategies for this. The pictures by the artists presented in the exhibition confront us with this endless circling around oneself. They raise questions that concern all of us and play with situations that we can all relate to."

David Foster Wallace's novel Infinite Jest does not provide any advice as to how the individual might make heads or tails of the harsh reality of life, the absurd madness of the everyday world, the fast-moving times informed by the Internet, virtual worlds, and the wide range of different channels of communication. His diagnosis of society remains a negative one. Wallace's text is pivoted on images and stories in which pleasure and pain, fun and addiction, religion and insanity, the private and the public, dream and reality, seriousness and irony, entertainment and death lie very close together for everybody, marking the hinges of daily life.

Similar motifs are to be found in the works of the 18 international artists featured in the Schirn exhibition Infinite Jest. The exhibits reflect connectedness, human relations, and subtle contexts in which the individual is always the foremost focus of attention. The architecture for the show provides each artist with a room of her or his own. The individual spaces are connected with each other in a labyrinthine manner resembling the literary composition of David Foster Wallace's novel. In varied genres of art, such as installation, film, painting, or performance, the artists presented hold a mirror up to both society and each individual. They approach the threshold of a new era in which the "transparent man" lives within a digital social network rather than only using it and in which life has turned into an optimization and experience project.