The Power of Architecture. The exhibition at the Design Museum explores Kahn's work and legacy through architectural models, original drawings, travel sketches, photographs and films; bringing to life his singular career and diverse output. 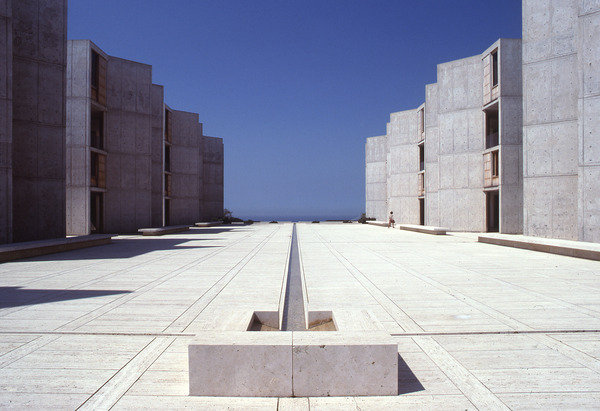 Louis Kahn (1901-1974) was a visionary architect, an expert manipulator of form and light, a creator of uniquely dramatic buildings, and a highly complex individual.

Described in his New York Times obituary as having been one of America’s foremost living architects, Kahn nonetheless realised few buildings in his lifetime and died practically bankrupt. Despite this, he was hugely influential – a fact affirmed by interviews with Frank Gehry, Renzo Piano, Peter Zumthor and Sou Fujimoto which feature in the exhibition. Now, Kahn’s reputation is being redefined, as his search for an architecture that grows out of a sense of place seems more important than ever.

Kahn himself drew on a wide range of sources, from ancient ruins to the work of Le Corbusier. He used innovations in construction techniques to design modern buildings that also project an elemental, primitive power. He was a perfectionist and an artist, who also believed that architects have an important social responsibility.

Louis Kahn: The Power of Architecture examines Kahn through six broad themes: City – looking at his relationship with his adopted home of Philadelphia; Science – demonstrating his use of engineering and geometric structures; Landscape – showing the importance of nature within his work; House – taking in Kahn’s residential commissions; Eternal Present – placing him in the context of architectural history; and Community – examining his devotion to public buildings.

All of Kahn’s important projects are extensively documented, from his early urban planning concepts and single-family houses to late works such as the Roosevelt Memorial (1973-74), which was posthumously completed in October 2012.

Kahn’s greatest masterpieces all take the form of inspiring institutions: The Salk Institute in La Jolla, California, designed to be ‘a facility worthy of a visit by Picasso’; the Kimbell Art Museum in Fort Worth, Texas – a showcase for Kahn’s extraordinary ability to work with light; and the National Assembly Building in Dhaka, Bangladesh – testament to the incredible impact of his monumental style. Each project is fully represented in this timely exhibition, which seeks to bring one of the twentieth century’s greatest master builders to a new audience.

Louis Kahn: The Power of Architecture is an exhibition of the Vitra Design Museum in cooperation with the Netherlands Architecture Institute, now part of the New Institute, Rotterdam and the Architectural Archives of the University of Pennsylvania, in Philadelphia.

The exhibition’s Global Sponsor is Swarovski.Louis Kahn: The Power of Architecture at the Design Museum is generously supported by the Louis Kahn Syndicate.

The Design Museum is the world’s leading museum devoted to architecture and design. The museum opened in 1989 and its work encompasses all elements of design, including fashion, product and graphic design. The museum has hosted exhibitions showcasing some of the most important pioneers of design including, Paul Smith, Zaha Hadid, Jonathan Ive, and Dieter Rams. The Design Museum plans to relocate from its current home at Shad Thames to the former Commonwealth Institute building in Kensington, West London. The project is expected to be completed by 2015. Leading designer John Pawson will convert the interior of the Commonwealth Institute building to create a new home for the Design Museum giving it three times more space in which to show a wider range of exhibitions, showcase its world class collection and extend its learning programme. For more information, please visit: designmuseum.org | newdesignmuseum.tumblr.com Swarovski delivers a diverse portfolio of unmatched quality, craftsmanship, and creativity that goes beyond the manufacturing of crystal. Founded in 1895 in Austria, Swarovski designs, manufactures, and markets high-quality crystals, genuine gemstones and created stones, and finished products such as jewelry, accessories, and lighting. In addition, Swarovski Crystal Worlds was established as a unique venue dedicated to showcasing artistic interpretations of crystal. Swarovski Entertainment collaborates with established industry partners and exceptional talent to produce international feature films, while the Swarovski Foundation supports creativity and culture, promotes wellbeing, and conserves natural resources. Now run by the fifth generation of family members, Swarovski Crystal Business has a global reach with over 2,350 stores in around 170 countries, more than 25,000 employees, and revenue of about 2.4 billion euros in 2012. Together with its sister companies Swarovski Optik (optical devices) and Tyrolit (abrasives), Swarovski Crystal Business forms the Swarovski Group. In 2012, the Group generated revenue of about 3.1 billion euros and employed more than 30,000 people. swarovskigroup.com