Murals and portraits. In addition to straightforward fashion shoots, which secured the financial basis of his practice, Avedon was commissioned to produce portraits of public figures to illustrate magazine articles about them. The ensemble of these portraits forms a fascinating panorama of the cultural and political elites of America. Another early interest was the everyday life of anonymous people in the streets of southern Italy and New York. 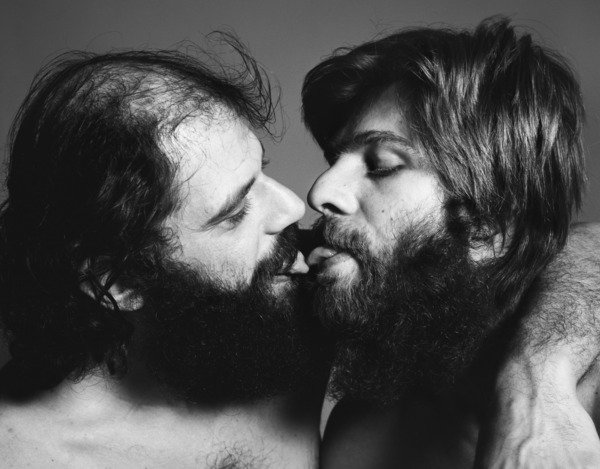 Richard Avedon (1923–2004) is widely regarded as one of the most important and influential fashion photographers of the second half of the twentieth century. From 1945 to 1965 he worked for ‘Harper’s Bazaar’. Right from the start of his career, his theatrically staged yet strikingly dynamic images of the key fashion trends of the time captured and defined the ‘look’ of the moment. In 1966 he joined ‘Vogue’ where he held the position of staff photographer until 1990. From 1980 he photographed the annual advertising campaigns for Gianni Versace; from 1985 he worked for the French magazine ‘Egoïste’, from 1992 for ‘The New Yorker’.

The presentation at Museum Brandhorst skirts this fairly well known aspect of Avedon’s oeuvre which has already been documented in numerous exhibitions. Instead it focuses on other areas of the photographer’s work. In addition to straightforward fashion shoots, which secured the financial basis of his practice, Avedon was commissioned to produce portraits of public figures to illustrate magazine articles about them. The ensemble of these portraits forms a fascinating panorama of the cultural and political elites of America. Another early interest was the everyday life of anonymous people in the streets of southern Italy and New York. Avedon’s reportage-like series, which remained unpublished for decades, bear witness to the photographer’s social commitment which led him to champion the American Civil Rights Movement in the 1960s.

Against the backdrop of America’s social and political upheavals, from 1969 to 1971 Avedon embarked on the production of four large-scale photographic murals that occupy a key position in the history of the medium. Between 6.5 and 10 metres wide and 2.5 to more than 3 metres in height, the pictures present the sitters – some of them larger than life – positioned frontally and lined up against a stark white backcloth. Photographed in black and white, the shadowless group portraits are notable for their rigorous clarity and unflinching objectivity that seem to undermine the aesthetic autonomy of the works, so that they are not instantly perceived as art. Their powerful impact is primarily the result of the intensity and immediacy of the confrontation between the viewer and the photographs – or rather the people shown in them.

The exhibition at Museum Brandhorst presents three of Avedon’s four murals: ‘Allan Ginsberg’s Family’ (3 May 1970) shows the eminent poet and doyen of the Beat generation with his extended family. ‘Andy Warhol and Members of the Factory’ (30 October 1969) is of particular interest as it complements the sizable holdings of Warhol’s work at Museum Brandhorst. ‘The Mission Council’ (28 April 1971) was made in Saigon during the Vietnam War and shows the commander of the American Forces and a group of government officials from Washington D.C. Unfortunately, the lack of space means that ‘The Chicago Seven’ (5 November 1969) cannot be part of the present exhibition. The mural shows a group of left-wing intellectuals who had protested against the 1968 Democratic National Convention. They were arrested and charged with conspiracy and with crossing state lines with the intent to incite a riot. Presided over by an overtly hostile judge and driven by specious arguments from the prosecutors, the trial went down in history as a legal farce.

Unlike the exhibition at the Gagosian Gallery in New York, where the four murals were shown in the summer of 2012 alongside a selection of thematically related works, the presentation of the murals at Museum Brandhorst is complemented by three different groups of works. The first of these is a selection of poignant portraits, the earliest of which date to the 1950s. The broad spectrum ranges from Francis Bacon, Brigitte Bardot and Samuel Beckett to Truman Capote, Bob Dylan and Marcel Duchamp, as well as Marilyn Monroe, Buster Keaton and Ezra Pound. The physicist Robert Oppenheimer and the Governor of Alabama, George Wallace, mark the extremes of the political spectrum of the American Civil Rights conflict.

Another group consists of photographs taken in a psychiatric hospital in Louisiana in 1963. They reveal a different, darker side of society. Some of the patients seem to be aware of their situation and their fate, while others appear to be in a kind of trance as though they had been heavily sedated.

The final group consists of images commissioned by the Amon Carter Museum in Fort Worth, Texas. Between 1979 and 1984 Avedon travelled through seventeen states of the American West and took pictures of miners, farmers, factory workers, vagrants and socially marginalised people. The series ‘In the American West’ vividly captures the demise of the oil and coal production and other sectors of the economy. A selection of the large-format (152 x 120 cm) images presents Avedon in a different light and corrects the perception of the artist as merely a commercial fashion photographer.
‘In the American West’ shows the flipside of the great American Dream, but the series also bears witness to the pride and dignity of the sitters in the face of hardship and scant hope for a better future.

Richard Avedon won numerous prestigious awards and his work continues to be exhibited and collected by leading museums in America and Europe. The critically acclaimed retrospective of his work held at the Whitney Museum of American Art in New York in the summer of 1994 travelled to Cologne. In 2001 the Kunstmuseum Wolfsburg presented the exhibition ‘In the American West’, and the exhibition ‘Photographs 1946–2004’, organised by the Louisiana Museum in Humlebaek in 2007, was shown at the Martin Gropius Bau in Berlin the following year. These exhibitions (to name but a few) and the scores of publications about his work testify to the respect Avedon enjoys in Germany.

The exhibition at Museum Brandhorst marks the first presentation of works by Richard Avedon from the holdings of the Udo and Anette Brandhorst Foundation. Apart from the mural ‘The Mission Council’, these consist of more than thirty portraits and photographs from the series ‘In the American West’. They are complemented by a handful of loans from private collections, while all other works are provided courtesy of the Richard Avedon Foundation in New York, without whose generous support this exhibition could never have been realised. The Gagosian Gallery assisted in the organisation and installation of the exhibition in Munich.

The exhibition is accompanied by a fully illustrated catalogue published by Hirmer Verlag with essays on several aspects of Avedon’s work by, among others, Bob Rubin, William Shawcross and Paul Roth. The catalogue can be purchased at the museum at the price of ca. €59.