The Space Where I Am

Taking its title from philosopher Gaston Bachelard's book 'The Poetics of Space' (1958) - which describes the lived experience of space and where he contended 'it is better to live in a state of impermanence than in one of finality' - the exhibition explores ideas of the void and emptiness from the 1960s to the present day. 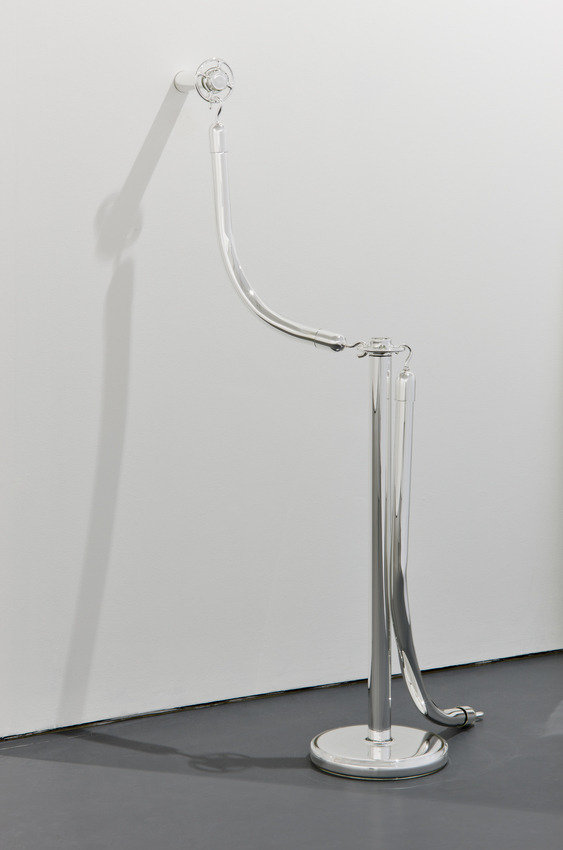 The Directors of Blain|Southern are delighted to present The Space Where I Am, a group show exploring ideas of the void and emptiness from the 1960s to the present day.

The exhibition’s title is taken from philosopher Gaston Bachelard’s book The Poetics of Space (1958), which describes the lived experience of space and where he contended “it is better to live in a state of impermanence than in one of finality”. All of the assembled works examine the dialectic between absence and presence, primarily valuing absence in the construction of form.

An element of faith or belief is often required when encountering Tom Friedman’s (b.1965) works; the viewer is invited to engage with the idea of the work, which might not be immediately visually apparent. Upon first encounter, Untitled (A Curse) (1992) appears as an empty pedestal. However, the sculpture actually comprises an invisible globe of space, as a witch has been asked to cast a curse on an 11-inch sphere floating 11 inches above the top of the pedestal.

Donald Judd’s (1928-1994) Untitled is a historical work from 1969, exploring how sculptural space cannot exist without empty space. A long, hollow aluminium beam rests on blocks of various sizes, the spaces between these corresponding to the blocks in identical proportions (based on the Fibonacci sequence). Judd felt that both positive and negative spaces were integral to form, with the relationship between the artwork and its environment also being key. Indeed, Carl Andre’s (b.1935) 36 Aluminium Lock Square (1968), a tile pattern arranged on the floor, directly explores space and form, removing sculpture from the plinth so that it expands into the space of the gallery and physical remit of the viewer.

Based on the principle that in our age matter should be transformed into energy and invade space in a dynamic form, Lucio Fontana’s(1899-1968) Concetto Spaziale (1964) consists of cuts and slashes to the surface of a bright monochrome painting. This gestural aesthetic blurs the distinction between two-and three-dimensionality, opening up sculptural possibilities with the appearance of a void behind, giving the spectator a sense of ‘serenity in infinity’. In a similar vein, work by Michelangelo Pistoletto (b.1933) addresses the spectator directly through a mirrored surface, blurring the line between the space of the work and the space of the viewer, unifying art and the changing realities of everyday life.

Integral to defining the aesthetic possibilities of video, one of Bill Viola’s (b.1951) rarer sound works, Presence (1995), offers a sensitive interpretation of human existence. First exhibited in the rotunda of the US Pavilion at the 46th Venice Biennale, voices from early childhood through to old age can be heard at the edge of audibility, whispering secrets and personal stories. The presence of the work can only be heard and felt, as sound vibrations pulse through the space.

In Schwarz, Rot, Gold (1999), Gerhard Richter (b.1932) abolishes form in favour of blank, reflective spaces; black, red and gold rectangles — recalling the German flag – become relational to the painting’s environment. Created alongside Richter’s commission for the entrance hall of the Reichstag in Berlin, celebrating the reunification of Germany, the work emphasises history’s untold stories, emptiness and reflectivity providing a vehicle to evoke memory.

James Turrell’s (b.1943) work is primarily concerned with light and space, and Pullen (Red) (1968) is created by projecting a single, controlled beam of light from the opposing corner of the room, so that it appears as a three-dimensional form. Working with simulation and real-time 3-D, John Gerrard’s (b.1974) work Sun Spot Drawing (Guantanamo City) 2012 (2012) is also created purely using light. The artist's hand holds a magnifying lens which simultaneously casts a shadow and concentrates the sun’s rays into one pure white spot in its center. The work unfolds in this way, dawn until dusk, every day for a full 365-day solar year.

Taking a closer look into travelling sound and light waves, Continuum (2013) by the artist collective United Visual Artists (UVA), was born out of studies into interference and the way in which waves are refracted by environments that we occupy. Among other media, the sculpture uses coded LED lights in an attempt to merge the visible and invisible.

Best known for his paintings and sculptures that reflect concerns with the social ills of urban living, Keith Coventry (b.1958) often signals absent presences. Bench (1995), suggests an act of urban vandalism, presenting a bench characterised by its loss of function, its wooden seat gone to reveal a lonely skeleton. Rachel Whiteread (b.1963) actively casts negative space, inverting the presence of objects and nothingness. A work from the late 1990s, Untitled (Paperbacks) formally recalls minimalist sculpture, while incorporating hues of subtle colour; casting an impression of the pages of books, rather than their spines, it marks the removal of the object’s function and suggests absence or loss. Gordon Matta-Clark’s (1943-1978) silver-dye bleach-print Office Baroque (1977) marks the artist’s site specific work in a derelict building in central Antwerp where he made cut-aways in the different stories of the building, creating a vertical deconstructive sculpture.

Lawrence Weiner’s (b.1942) ROLLED INTO & ONTO THE SEA (1999) draws into question the relationship between sculptural form, signification and meaning. In the 1960s, Weiner challenged traditional assumptions about the status and nature of art. In doing so, he offered a unique insight into the difficulties of ascribing fixed forms and definitions, or perhaps even meaning, to both the practice of art-making and to the art object itself.

Rosy Keyser’s (b.1974) painting reaches beyond the limits of the canvas, inspiring a bodily response to our existence in the material world. Interested in the intersection between people and the matter that surrounds us, she forages for materials which she then gesturally moulds, tears or deconstructs to reveal their intrinsic fragilities. Using large stretchers that seem window-like and operate as a grid, these materials are applied upon voids of space to suggest a sense of ritual and renewal. Decay and absence are in flux, emphasising past presence and action; a palimpsest of existence that waxes and wanes.

Spinning Heads in Reverse (2006) by Tim Noble & Sue Webster (b.1966; b.1967) actively plays with positive and negative space. Self-portraits of the artists appear to be both physically absent but simultaneously present, perhaps only truly resonating in the viewer’s imagination.

Employing a metaphorical interpretation of absence and obstruction, Michael Joo’s (b.1966) Emigrant (2012) explores notions of exclusion and socio-economic division. Delicate self-entwining rope and stanchion forms are constructed of mirrored borosilicate glass, both absorbing and reflecting their own surroundings. As familiar objects that define space and segregate people, Joo suggests a new space, a cyclic space, which breaks down any social or physical divide.

Through the dialogues created by the juxtaposition of these artworks, the exhibition assesses how absence can actively give form to space, a subject that has preoccupied artists over the past half century, as well as examining how viewers might encounter these ‘empty’ spaces.