Moving Stillness (Mt. Rainier), by Viola, is a monumental installation shown for the first time since its inauguration in 1979; with a large body of water, environmental sound recordings and projections. Concurrently is presented one of Japan's leading contemporary artists and a key figure in the Mono-ha (School of Things) movement. 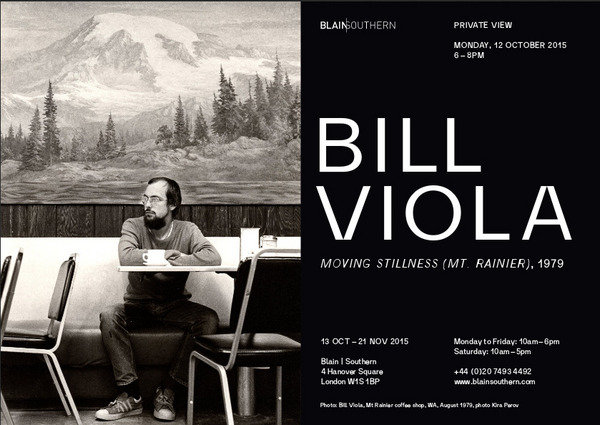 In London this a utumn , Blain|Southern and The Vinyl Factory present significant rarely - exhibited works from Bill Viola's early career at 4 Hanove r Square and The Vinyl Factory Space at Brewer Street Car Park . The exhibitions illustrate Viola’s boundless experimentation with the newest media of the time, which paved the wa y for subse quent generations of artists work ing with video, sound and computer technology.

At Bla in|Southern the exhibition focuses on one monumental installation Moving Stillness (Mt. Rainier), 1979, shown for the first time since its inauguration at Medi a Study / Buffalo, New York. With a large body of water, environmental sound recordings and projections, Viola’s multi - faceted yet serene creation was pioneering in its mixed use of media.

Moving Stillness (Mt. Rainier) is a landmark in Viola’s meditations on the fragility of nature and our perception of its changes over time . A screen is suspended from the ceiling above a large shallow pool of water. A projector with three separate beam s (one each for red, green and blue light) sends an edit of real - time footage of Mount Rainier to the surface of the water , which then bounces up to reach the rear projection screen. At periodic intervals, the water’s surface is disturbed causing the three beams of colour to separate, until finally becoming an unrecognisable pat tern of form and colour. Slowly the water settle s, to once more form a coherent image after the surface vibrations subside.

The solid, unmoving, reflected image of a mountain proves to be delicate and impermanent as it disintegrates at sl ight disturbances on the surface of the water. Presented in the galle ry as a stand - alone work , this meditative installation offers a rare moment for mindful focus.

Viol a’s spiritual investigations have always been underpinned by a deep scientific underst anding of the neuro - physiolo gical mechani sms of perception. In Moving Stillness (Mt. Rainier) he seeks to reveal the fundamental human truths that lie beneath the surface of observable phenomena.
“ The ‘ mountain ’ is constantly unravelling and reforming. It becomes metaphoric for the existence of the mountain as a conceptual image in the mind. The mountain never moves, only your mind does. ” Bill Viola

n conjunction and presented for the first time ever, recordings of Bill Viola’s early sound compositions form an immersive installation The Talking Drum at The Vinyl Factory Space at Brewer Street Car Park in Soho, London. Two works are featured, The Talking Dr um , 1979 , and Hornpipes , 1979 – 82, that explore the resonance s of an empty swimming pool.
The works are sonic manifestations of Viola’ s work with physical presence , and a logical development follo wing his early experiments with audio. From 1973 Viola , as part of Composers Inside Electronics , began t o experiment with the physical eff ects of audio on audiences and surrounding spaces, exploring the manipulat ion of physical sound waves through the addition of electronic playback and modulation. He produced audio effects such as gating which later became a popular fea ture of synthesisers and samplers. These pieces were r ecorded at various sessions in an empty swimming pool at Media Stud y/Buffalo, NY, in 1979 and 1982 and reflect also h is interests in non - western music and religion through the transcendental nature, instrumentation and sonic qualities of each piece. Viola’s ground - breaking work in this field coincided with the rising popularity of electronic music.

Restored by Bill Viola Studio, r ecordings of these performances are presente d together for the first time as a limited vinyl edition of 100 , pressed by The Vinyl Factory. The hand numbered edition features two full compositions, The Talking Drum and Hornpipes and an excerpt from a series of experimentation entitled Pulses (Duomo B ells). Reproductions of the original program notes and invitation from a 1979 Composers Inside Electronics performance in Buffalo, NY are also enclosed.

The exhib itions are the latest in one of Bill Viola’s most extensive periods of ac tivity across the UK, which includes the concurrent opening of Bill Viola a t Yorkshire Sculpture Park , the release by Thames & Hudson of his most comprehensive monograph and the latest leg of the Tate and National Galleries o f Scotland touring programme, ARTIST ROOMS , at The Wilson, Cheltenham, Gloucestershire . This follows notable presentations at Auckland Castle and The Line, and the permanent installation of The Martyrs (Earth, Air, Fire, Water) , 2014 , at St Paul’s Cathedral, London.

Blain|Southern announces its first exhibition with Kishio Suga, one of Japan’s leading contemporary artists and a key figure in the Mono - ha (School of Things) movement.

Ris ing to prominence in the mid - 1960s, Suga and other Mono - ha artists, such as Lee Ufan and N o buo Sekine, eschewed traditional representation, instead exploring quotidian and natural materials; investigating the relationship between them and their impact on t he surrounding space. The movement grew both in response to the rapid industrialisation of Japan and also as a reaction to the dominant influences of western art history.

On show at Blain|Southern is the installation Perimeter (Entai), 1985 , a significant piece in the artist’s on - going examination of the notion of boundaries. Encircling the space with a perimeter of wood and stone, the artist explores the interaction between the physical realm of objects and the emotional world of the viewer. He aims to re veal universal truths through the paradox of simultaneously dividing and connecting.

“To see the hidden reality of ‘ mono ’ (things) is to understand the structure of the world . ”
Kishio Suga

Perimeter (Entai) was conceived to be adaptable to any space in which it is presented by the artist . Whether in a man - made interior or within the natural environment, the location defines the configuration of the installation yet its inherent meaning remains intact. Outdoo rs, the work responds to variations in the surroundings , whereas indoors it responds to the c haracteristics of the room. T hrough the continuity achieved by linking the stone and wooden elements, it transforms an ordinary space into a specific site.

“ I cons tructed Installation pieces, a format that has become quite common today, inside the galleries. I bring a variety of things into the gallery, arranging them and giving them structure so that they occupy the entire space. The Installations are never permane nt and can be quickly disassembled or demolished. One might say that I create temporary worlds.” Kishio Suga , The Conditions Surrounding an Act”.

A number of wall - based works in wood are reflective of a central belief held by Mono - ha artists that everythin g already exists so nothing new can be made that is greater than nature itself. Suga illustrates this by hanging a rectangle of Japanese hard wood on the gallery wall as if it were a painti ng. He develops the concept even further by carving into the existi ng knots and burrs within the wood to demonstrate the impermanence of nature not only by the arrangement of objects, but also by impact ing on the materials. This progression of Mono - ha philosophy is specific to Suga.

A nother defining chara cteristic of Suga ’s practice is that in parallel to his artmaking, he also engages in written criticism of his own work. Through writing he aims to objectify the physical creative process via language.

For several decades Suga’s work has been presented in significant solo and group exhibitions internationally, including the Paris and Venice Biennales and most recently a solo show at The Museum of Contemporary Art, Tokyo ; yet he has rarely exhibited before in Europe.