Welcome to the reopening of Moderna Museet. All exhibition halls will be open throughout the day, showing In our time - works from the Moderna Museet Collection, the Pontus Hulten Collection and Anna Riwkin - Portrait of a Photographer, and, last but not least, the new works by Yinka Shonibare in the entrance hall. 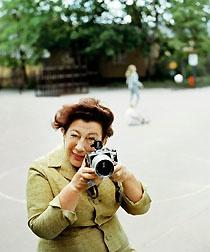 In Our Time
Works from the Moderna Museet Collection
February 14, 2004
The Moderna Museet Collection is one of the foremost in Europe. This new presentation, which is organised into three chronological sections, demonstrates the breadth of the Collection, which is firmly rooted in the 20th century. Zarina Bhimji and Tunga are two very recent acquisitions, but of course the presentation also includes famous works by Pablo Picasso, Henri Matisse, Sigrid HjertÃ©n and Robert Rauschenberg's Monogram (The Goat). Rent an audioguide and enjoy the Collection at your own pace.
It feels natural and obvious in every way to reopen the Moderna Museet building with a massive presentation of the collection. After all, this is the heart and soul of the museum, and without it Moderna Museet would not be the unique institution it is and has been. In addition to being one of northern Europe's finest collections of art from the 20th century up to present times, it also has a strong character and a unique history.

The Enigma of William Tell by Salvador DalÃ­, Tatlin's Tower, Marcel Duchamp's Fountain, Matisse's Moroccan Landscape, Picasso's Spring, and Niki de Saint Phalle's Paradise - not to mention Robert Rauschenberg's Monogram, aka The Goat - all conjure up clear pictures in the minds of most Swedes. The above artists were prolific during their lives, and their works have been spread to collectors and museums all over the world. Moderna Museet owns a couple of works by all these artists, but thanks to favourable circumstances and discerning purchases at the right time, they happen to be seminal works marking new artistic breakthroughs or works that in some way represent important cultural or historical developments.

The Pontus HultÃ©n Collection...
February 14 - April 18, 2004
The legendary Pontus HultÃ©n, director of Moderna Museet from 1960-1973, has been an art collector all his life. Through this loan to the museum, we can present a selection of his idiosyncratic and unique collection, including works by Eva Aeppli, Marcel Duchamp, Dick Bengtsson, Olle Baertling and Rebecca Horn.
Movement in Art, Tinguely, De Saint Phalle, Duchamp. Warhol, happenings. As a tribute to one of Moderna Museet's most colourful directors, and as a parallel version of a revolutionising and exhilarating phase in the museum's history, we are showing a selection of works from Pontus HultÃ©n's private collection.
What makes some people seem to have a more finely tuned feeling for what is new, revolutionary and ahead of its time? A well-developed intuition, perhaps, or an inner voice? Another crucial asset is probably that of being open and curious. Having the ability to grasp a historical opportunity, something different, verging on the outrageous. This comes fairly close to describing Pontus HultÃ©n (b 1924), director of Moderna Museet between 1960 and 1973.

Anna Riwkin
Portrait of a Photographer
February 14 - May 23, 2004
One of the most important reportage photographers of her time, Anna Riwkin (1908-70) documented contemporary life in Sweden an in the world around her. Karl Gerhard, Karin Boye, and the elder GÃ¶sta Ekman are among the many well-known Swedes captured by her frank and perfectly-timed stills.
As one of the outstanding journalistic photographers of her time, Anna Riwkin documented Sweden and the world of her days. Her work has been donated to Moderna Museet by her family, and the museum will be reopening the Skeppsholmen building with one of the most comprehensive exhibitions of this prominent professional photographer. Hardly any other photographer has portrayed cultural celebrities and historical events as passionately, and managed to capture the zeitgeist as consistently.
Thanks to her wide circle of friends, Russian-born Anna Riwkin periodically had intensive contacts with the younger generation of Sweden's and Europe's cultural elite. Her friends included the people involved in the writer groups Spektrum and ClartÃ©, and it was Anna Riwkin who took the well-known portrait of Karin Boye at the age of 39, staring into the distance. Eventually, Anna Riwkin also started to take pictures of dancers, quickly earning a reputation as a skilful dance photographer.
Her photographic assignments took her to different parts of Europe, where she continued to depict dancers and cultural personalities. In Paris in 1933 she portrayed the already renowned surrealists Man Ray, Salvador DalÃ­ and Max Ernst.
She also portrayed other personalities who were and still are influential, including the lecturer on family planning Elise Ottesen Jensen, and the writer Astrid Lindgren, with whom she collaborated on several children's books about children from different parts of the world. Anna Riwkin took the pictures and Astrid Lindgren wrote the text. When the war broke out in 1939 and studios were under financial restraint, Anna Riwkin moved on to journalistic photography, initially for the magazines Se and Vi.
Among her numerous reportage trips throughout the world, the trips to Northern Sweden and Lapland appear to have impacted the most on her career. Her photos describe the life of the Sami people, and this was the first time a photographer chronicled life in this northern outpost of Sweden. Her features on the Sami girl Elle-Kari were first published in Vi, and in 1942 came out as a book that was later translated into nine languages. The author was Elli Jannes.
The photographic medium exerts a magical attraction on human seeing, and the museum's exhibitions of prominent photographers have always attracted a large, interested audience. This makes it an even greater pleasure to re-open the museum with Anna Riwkin's fairly unknown and extensive oeuvre.

Anna Riwkin - Portrait of a Photographer
The book has 272 pages with 200 illustrations. Authors: Leif Wigh, Annika Gunnarsson, Ulrika Melin Fredholm and others.
Price in the museum shop: SEK 180.

Yinka Shonibare
February 14, 2004
Vasa in a bottle, Warm wall and Cool wall. The Anglo- Nigerian artist Yinka Shonibare has created two works for Moderna Museet's entrances. These will be replaced in approximately three years by a new site-specific work of an other artist.
In connection with the museum's refurbishment, British-Nigerian artist Yinka Shonibare has been invited to design a work, an artistic environment, for the two new Moderna Museet entrances. It is a pleasure to announce that one of the world's currently most highly acclaimed artists has now created a remarkable work for the museum as a commentary on the museum's dual identity in relation to Sweden, Stockholm and the world.
With Vasa in a Bottle Shonibare ties together historical and global threads traversing oceans and continents, and which - in a broader sense - mean that people all over the world share a common history. To Swedes, the Vasa man-of-war is emblematic of a historical period, a national monument and a fiasco rolled into one. The Vasa is the oldest existing ship from the 17th century, a century famous for its merchant navies sailing the seven seas, colonialism and slave trade. Yinka Shonibare's work reminds us of how Sweden relates to the world, and how the world relates to Sweden.
The other part of the new work consists of textile-covered wall sections, titled Warm Textile Wall and Cool Textile Wall. Abstract folklore patterns printed on richly-coloured cotton fabric. "Traditional African batik" is our immediate reaction, but we are mistaken. Historically, the fabric and prints stem from Indonesia, the origin of batik, and travelled from there, via colonisation, to Holland and then on to England, where the fabric was mass-produced and exported to Africa. The textiles were then shipped back to Europe as "African".
It is an astounding and surprising voyage that Yinka Shonibare (b. 1962) takes us on. Starting in the associations aroused by the fabric, he dresses (and strips bare) western culture. Visitors encounter creatures from outer space, haute couture outfits and life-size dolls in obscene postures dressed in 18th century crinolines. The result is both death-defying and hilarious. But the political edge is razor-sharp.
Suddenly, familiar and natural occurrences are revealed in a new light, forcing us to question what we regard as natural when it comes to ethnicity, the colonial powers and, ultimately, the strange meanderings of global trade. The tacit cultural codes of the rich world suddenly appear more clearly. The hidden seams are made visible.
Yinka Shonibare was born in London in 1962 and grew up in Nigeria and Britain. He has had numerous exhibitions, especially in London, where he has also designed site-specific works for the London Underground. At Documenta in Kassel (2002) he presented an installation that attracted huge interest. He lives and works in London and is the first artist invited to create the artistic "signature" for a three-year period in the Moderna Museet entrances.
_________

The 1st at Moderna Museet
On the first of each month, Moderna Museet will host smaller exhibitions inside or outside the museum highlightning the work of contemporary artists. This might be anything from artistic experiments and processes to individual works.
On the first day of each month, a small exhibition will open in or outside the museum, showing contemporary, now living artists. The art form and exhibition format will vary depending on the artists. The concept is very flexible, to provide the best potential. Some exhibitions will run for a month, while others will be longer. The 1st at Moderna Museet can take place at different venues - in or outside the musem - but the opening will always be on the first day of the month, all year round.
The purpose of this series is to capture what is going on in the art world right now, what is current today and perhaps tomorrow. We want to show our audience how artists are thinking and working at this moment, what different means of expression they employ and the issues that younger and older, famous and less well-known, Swedish and foreign artists are engaged with today. And we want to be as boundless as the mind.
The series will be launched in time for the reopening of the building on 14 February, and the first exhibition will be a continuation of the last one at Klarabergsviadukten 61 in August 2003 - The Last Picture - by and with the artists Miriam BÃ¤ckstrÃ¶m and Carsten HÃ¶ller, who invited the public to send in a picture that was in some way the last picture. These were shown on a wall at Klarabergsviadukten and since then the collection has continued to grow. The artists have now made their final selection and will present the pictures as a book. At 6 pm at (plats?) Miriam BÃ¤ckstrÃ¶m and Carsten HÃ¶ller will discuss their project, The Last Picture, with Magnus af Petersens, curator at Moderna Museet.
The next exhibition will open on 1 April at Moderna Museet's new Studio, where the audience will be able to see a selection of films and videos from the museum collection. The 1st at Moderna Museet in the Studio is an interactive exhibition designed by the artists and designers Claude Closky, Xu Bing and Carsten Nicolai. Visitors will have an opportunity to create their own typeface, and the artists' own unique graphics will be presented in an online-environment. Type0 -writing with style is an exhibition originally conceived by Cecilia Andersson for FACT in Liverpool.

Our doors open at 10 am, and the actual inauguration ceremony takes place at 12 noon.

All exhibition halls will be open throughout the day, showing In our time - works from the Moderna Museet Collection, the Pontus HultÃ©n Collection and Anna Riwkin - Portrait of a Photographer, and, last but not least, the new works by Yinka Shonibare in the entrance hall.

Admission is free, except for two out of 17 exhibitions shown in 2004.
Admission is always free to the Moderna Museet Collection!

At each opening at 6 pm, a public discussion with the artist/artists will be held in conjunction with the exhibition.