The Yellow Side of Sociality: works by various contemporary artists from different regions in Italy, who have migrated to another European country. Paintings from Siena: 60 master pieces which bear testimony to a revolutionary form of art from the 13th until the 15th century. 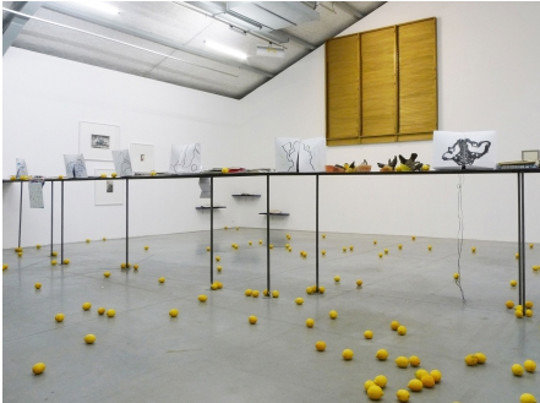 The Yellow Side of Sociality
Italian Artists in Europe

The Yellow Side of Sociality: Italian Artists in Europe is presented by BOZAR and Dena Foundation for Contemporary Art, and gathers the work of a multi-generational group of artists, from historical figures such as Michelangelo Pistoletto, Ettore Spalletti and Vettor Pisani to a younger generation, including Micola Assaël, Rossella Biscotti and Chiara Fumai.

The title brings together the concept of sociality, the natural inclination to come together and share the duties demanded by the art of living well, and the colour yellow, which calls forth positive associations with sunshine, pleasure and happiness, but also stands for cowardice and jealousy. In Italy, a giallo is also a film or novel brimming with sensational crime and mystery. As a shade of sociality, yellow captures the ambiguities of Italian culture and society, while also conveying the country's positive tradition of placing art at the centre of social intercourse and innovation.

Various works of art in The Yellow Side of Sociality invite visitors to get involved rather than simply look on from the side-lines. Davide Bertocchi's installation, Top 100, invites the audience to listen to the top hits of the international art scene, while Marinella Senatore's Movie Set is just that: a set which visitors can use to shoot a film or scene. Artists Christian Frosi and Diego Perrone present a long and enigmatic table with a selection of Italian art magazines illustrating current trends in the art scene, both in their homeland and abroad. With BOZAR Silent Tour Cesare Pietroiusti offers an intriguing guided tour around the corridors of the Centre for Fine Arts that the general public is not normally permitted to enter. Luca Vitone's Eppur si muove is a wheel-shaped sofa, a space for reflection and meetings dedicated to the condition of the Roma people in Europe. Michelangelo Pistoletto's installation, Love Difference – Mar Mediterraneo, on the other hand, is one big mirroring table in the shape of the Mediterranean Sea, with chairs from the countries of the different cultures of the region. The image invokes the cultural diversity around the sea while simultaneously suggesting solidarity.

BOZAR STREET
The exhibition is displayed on BOZAR STREET, a freely accessible route that connects the two public entrances of the Centre for Fine Arts, one on rue Ravenstein and the other on rue Royale. On this occasion, the STREET extends itself all the way up to the Justus Lipsius Building, which houses the Council of the European Union in Brussels, where in the main hall visitors can admire a monumental version of Michelangelo Pistoletto's Third Paradise.

Support: The Ministry of Foreign Affairs of Italy

BOZAR pays tribute to Siena and its magnificent pictorial tradition in collaboration with the prestigious Pinacoteca Nazionale di Siena and the Musée des Beaux-Arts de Rouen.
Sienese artists developed their own style over time, evolving from the rigid patterns of late-Byzantine iconography to more narrative works of art.
The exhibition showcases sixty master pieces which bear testimony to a revolutionary form of art which, from the thirteenth century until the fifteenth century, took an increasing interest in space and in exploration of human emotions and used brilliant, unusual colours.
The Sienese school inspired other arts centres in Italy and finally left its mark all over Europe. A unique opportunity to see these masterpieces in Brussels!

In the context of: The Italian presidency of the Council of the European Union

The Centre for Fine Arts, a palace of the arts. Immense and yet almost invisible, overlooking the city and yet buried underground, multiple and yet unified, prestigious and yet open to all... this was how Victor Horta imagined the first cultural centre of its kind to be constructed in Europe, the Brussels Centre for Fine Arts.