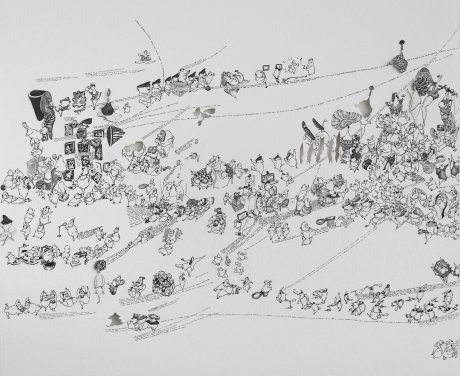 During the summer months, the MSK will pay tribute to ex-director Robert Hoozee. The tribute exhibition provides an overview of the many top pieces he acquired between 1982 and 2012, from James Ensor, Fernand Khnopff, George Minne, Felicien Rops and Leon Spilliaert, to George Grosz, Oskar Kokoschka and Max Ernst. Many well-known, but also unknown acquisitions, that have never been shown before. As the exhibition focuses mainly on the drawing, line and texture, Andrea Bianconi (Italy), Ricardo Lanzarini (Uruguay) and Mark Licari (USA) have been invited to make a monumental wall drawing and give workshops to youths with an emphasis on collective drawing. And finally, the summer season has been given more colour following the Belgian museal first of Der Kreislauf, a video of Katrien Vermeire about the sale of paper flowers by children on the beach. (Image: Ricardo Lanzarini)