He is concerned with architectural questions and the perception of everyday life. In his series of posters for the Documenta X, for example, he traced the path of the visitor along the exhibition itinerary through the city with a sequence of urban motifs. In this exhibition Steinbrecher expands his vocabulary to the three-dimensional object 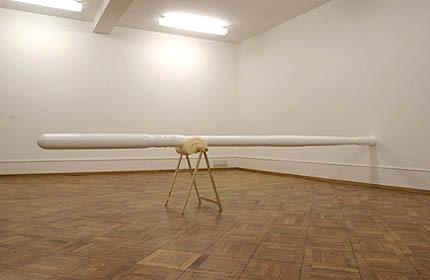 Erik Steinbrecher, born 1963 in Basel, is concerned with architectural questions and the perception of everyday life. In his series of posters for the Documenta X, for example, he traced the path of the visitor along the exhibition itinerary through the city with a sequence of urban motifs. Several artist's book have been made from the stock of his comprehensive picture collection, dedicated to specific subjects, e.g. persons sleeping in public parks in the publication Gras, or typologically arranged shots of various structural partitions, bamboo mats, garden fences or barbed-wire fences in the newspaper-size Arabesque Ã¡ Gogo which recently appeared. A further experimental group of works is comprised of cinematic montages based on image material acquired through research and accompanied by drawings and collages.

In the exhibition at Galerie Barbara Weiss, similar to the recent show at the Swiss CentrePasqu'Art in Biel, Steinbrecher expands his vocabulary to the three-dimensional object.

A central element of the exhibition is the 5-metre-long, turned, white wooden rod Dong, which in the large room of the gallery protrudes sideways far into the space from the wall. It is supported - as if preliminarily set up in a workshop - by a hinged trestle and a protecting piece of foamed material. The perfect finishing and the dull gloss of the white colour render untouchable the object which stands in the gallery room like an obstacle and the shape of which is reminiscent of a totem pole, a baseball bat, a flagpole, or a spit, for instance. Dong is the first piece of a series of rod-like objects.
A large-format photograph depicts the white Volksbank (People's Bench), which was built for the library of the Free University of Bozen in 2003. In contrast to a normal bench, it visibly consists of two independent elements that are pushed together: a bench without a back as well as a fence row. Similar to the installation Dong, the current combination of the elements can be disassembled without much trouble and conceived anew.
The plastic wall objects, Beutel Nr. 1 and Nr. 2 (Bag No. 1 and No. 2) belong to a group of very recent works. Through a casting process, objects that were formerly soft and flexible were transformed into firm, full-plastic shapes.

The KnÃ¼ppel (Club) made of iron, as well as the Haken (Hooks) and the Pfosten (Post) made of aluminium, are further objects created in a casting process. The rough, silvery surface and the shapes of the objects remind one of the original wooden models - branches of trees. In the project for the RathausbrÃ¼cke in Berlin, the KnÃ¼ppel served as a prototype for a series of banisters; the Pfosten, on the other hand, is an exemplary structural component of the pergola which the artist will realise this year in a vineyard in Kaltern (South Tirol).

In the entrance space of the gallery, Steinbrecher will show four Croquis (line-like path directions). They each depict one of many possible connections between two points. The pencil line describing the path does not run linearly, however, but with its numerous detours and forks reminds one more of a scribbling attempting to reproduce an entire scenario. He works in a similar way in the 12-second video loop Rope Mummy, in which he uses two short stunt sequences from American action movies to edit together narrative strands from different sources. The drawings can be regarded as a visualisation of this method.


Although the artist deliberately refrains from being unambiguous in his work, he does repeatedly fall back on a vocabulary of architecture, nature and everyday life, opening up for the visitor a totally different view of the world through the way they are linked.