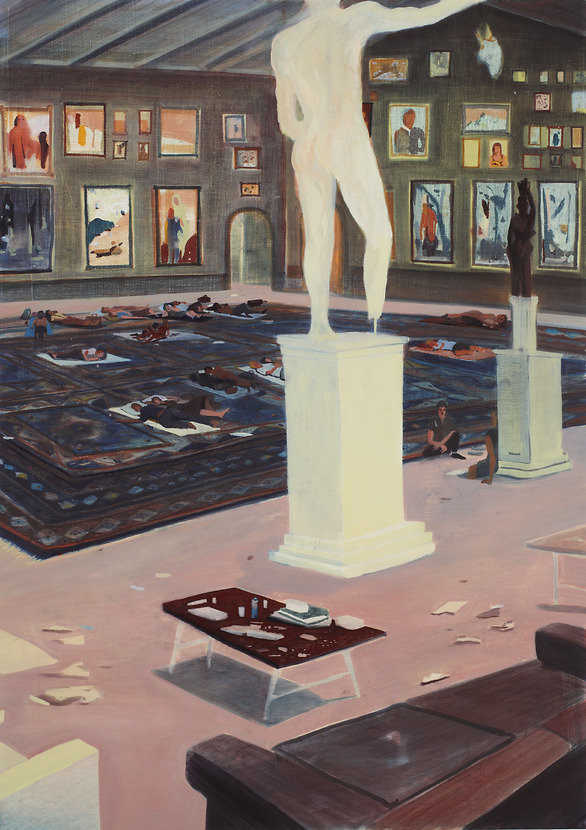 A long-awaited event to start the new season: the third solo exhibition of works by Jules de Balincourt. His show, in our gallery in the Marais, has the beguiling title Blue Hours and includes fifteen new paintings. This ‘Michel Houellebecq’ of painting, as Jean-Marc Bustamante calls him, explores private themes that evoke architecture, travel, human migrations and artificial places, in a floating, idealised and escapist atmosphere with hints of a pervading vulnerability.

Balincourt throws himself directly into his painting without drawing or other preliminaries. He creates whole worlds out of patches of bright colours that he reacts to in a subconsciously primitive state of intuition, constructing universes bathed in a silent, ambiguous reality to which our response is out of kilter with the way that that reality is represented. It is difficult to distinguish what might be an imaginary environment from a landscape by the sea, or a daylight scene from what is perhaps a night view. What remains, though, is a sensation of delight, with intimations of danger in the offing.

This French-born American artist has lived in the USA since the age of ten and has worked in New York for around ten years. Very early on, he was noticed in Greater New York, PS1/MoMA 2005 and, in Europe the following year, in the exhibition USA Today at the Royal Academy, London – an exhibition which thrust him into the international limelight.

Last year Jules de Balincourt had his first monographic exhibition at the Montreal Musée des Beaux Arts, in Canada. This led to a museum presentation last spring at the Musée d’Art Contemporain, Château de Rochechouart (France). He is also preparing a one-man show to take place in November 2014 at the Fort Worth Museum of Modern Art, Texas.