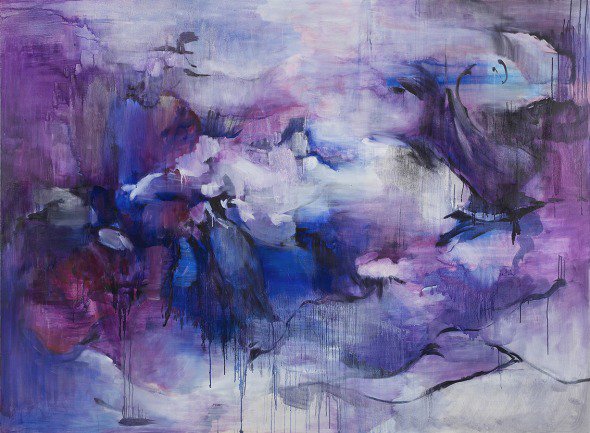 Timothy Taylor Gallery is pleased to announce an exhibition of new paintings by Eemyun Kang for the gallery’s Project Room. It is the artist’s first exhibition with the gallery.

Ably translating organic forms into lush abstraction, Kang creates complex natural worlds marked by energetic and fluid brushstrokes. While she avoids the use of defined figurative elements to create her narratives, Kang’s seductive colour-fields are often punctuated by quasi-anthropomorphised forms. The paintings presented here evolve from the artist’s attempts to visualise music, and in particular, human voices. The titles reference language and speech and are often derived from poetry – in this instance from Anne Carson’s Autobiography of Red and Jane Gregory’s My Enemies.

For Kang, the idea of myth has been a tool that operates through the creative imagination. Myth as transitional tale, legend and folklore is utilised as a starting point for the creation of narrative events in imaginary time. The viewer is invited to drift between the paintings’ stories where tone, gesture and technique are revisited and redeployed culminating in an immersive and ever-shifting experience.

Alternating between abstract and figurative registers, she creates imagined hybrid worlds or mystic landscapes. The paint and canvas constitute transformative elements that mediate between subject and object, sub-consciousness and consciousness, abstraction and figuration.

Eemyun Kang (b.1981 in Busan, Korea) lives and works in London. She obtained a BA degree from Slade School of Fine Art (2006), completed her Postgraduate Studies in Fine Art at The Royal Academy Schools in London (2009) and received a Professional Doctorate in Fine Art (DFA) at the University of East London (2012).