Working together. A series of works of the last years offering a clear view of his interest in the social role of art and the ethical commitment. Curated by Raffaele Gavarro. 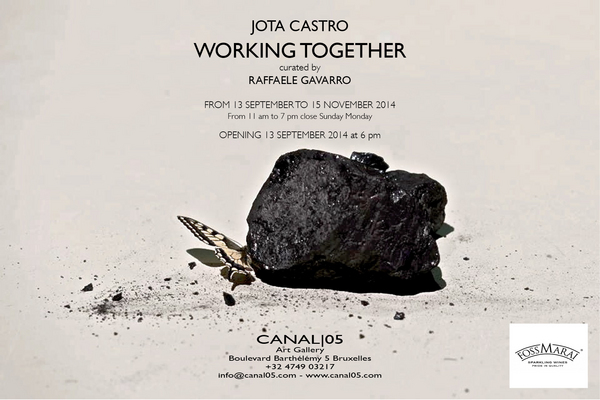 The Canal | 05 is pleased to announce that to inaugurate the new exhibition season will be the personal exhibition of Jota Castro entitled Working together, curated by Raffaele Gavarro. The Peruvian artist based in Brussels, presents for his first personal exhibition in the Belgian capital, a series of works of the last years offering a clear view of his interest in the social role of art and the ethical commitment.

From balloons wrapped in barbed wire series Tricky to Rubik's cube Zauberwürfel 2009 and Amazonas ever in 2009, passing for Panem et circenses of 2011 and the Imagination au pouvoir of 2012, up to Here comes the rain again in 2013, Jota Castro exposes the artworks that most represent his research, creating a new and coherent path that returns all the strength of his intellectual and expressive search. To follow him and support him in this course there is the critic and curator Raffaele Gavarro, who has worked for years in curatorial projects and reflections on the ethical role of contemporary art and the consequent induced mutations in its aesthetic nature. In this context, the exhibition will be accompanied by a conversation between Castro and Gavarro, that starting from the analysis of the expectations that we have towards the work of art, its meaning and the role it has in our society, does not reflect less on what and how art is still decisive in the cognitive processes of our time, touching matters broadly social policies, which affect both the art system as on her most intimate dynamic computing.

Castro Jota was born in Yurimaguas, Peru, in 1965 and lives now in Bruxelles, Belgio. He edited and partecipated at collateral event of the 55th Venice Biennale 2013 Emergency Pavilion: Rebuilding Utopia, Dublin contemporary 2011, , Biennale Sydney 2010, 53rd Venice Biennale 2009, The Fear Society, Pabellón de la Urgencia. He also partecipated at Biennale of Istanbul and Mosca 2007, Tirana, Prague and Kwangju (Korea), winning this latest award in 2004. He is professor at the European University of Madrid.

Raffaele Gavarro was born in Caserta, Italy, in 1963 and lives in Rome. It is critical, art writer and independent curator. He was Head Curator of the island of San Servolo (VE) and Independent Curator at the Macro Museum in Rome. He was curator of the Italian Pavilion of the 11th Bienal de La Habana. He is professor of History and Theory of New Media at the Academy of Fine Arts in Rome.