Paranormal. Ever since The Arnolfini Marriage (National Gallery, London), mirrors have always fascinated painters and they have depicted them in many ways. In the opinion of the gallery owner Jerome Jacobs, their distorted reflections of reality are part of an appeal for the supernatural (think of the 'magic mirror'). In this exhibition, he wishes to share his subjective viewpoint with us through the works of other artists. Carrie Yamaoka, Recent work. The first solo exhibition of work by New York artist Carrie Yamaoka with the gallery. 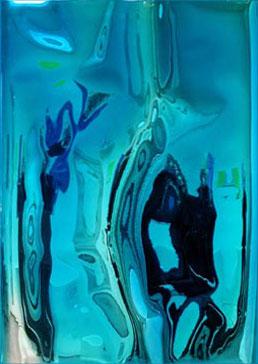 Ever since The Arnolfini Marriage (National Gallery, London), mirrors have always fascinated painters and they have depicted them in many ways. Van Eyck's painting was undoubtedly not the first in its genre (and in our context this is not all that important), but his surprising composition still turns it into a point of reference in this field. Another element that runs through the history of Western painting is the curtain, such as the one Rembrandt painted in trompe-l'oeil in a Nativity (Museum of Fine Arts, Kassel), which seems to invite the visitor to explore the composition. In 1962, Michelangelo Pistoletto combined these two archetypes in Tenda verde (Museum of Fine Arts, Brussels), a mirror painting which reflects the image of visitors, but allows them to 'protect' themselves against the work by hiding behind the image of the curtain that covers half of the painting. All these references can also be invoked with regard to the work of the New York artist Carrie Yamaoka (USA) whose work questions the relationships between a piece that is turned into a mirror, and its environment. Her works, composed of Mylar film glued to a support and covered with numerous coats of epoxy resin, are in no way industrial objects; the protrusions that break the lustre of the material _ the air bubbles caught between the resin layers _ testify to the slow production process.
These object-paintings, which are perpetually in the making, invite the visitors, and also the environment they are placed in, to actively participate in the creation of the work.

In the opinion of the gallery owner JÃ©rÃ´me Jacobs, their distorted reflections of reality are part of an appeal for the supernatural (think of the 'magic mirror'). In this exhibition, he wishes to share his subjective viewpoint with us through the works of other artists. Thus, the kinetic works by Pol Bury (B) are animated by a movement that is so imperceptible that one might associate them with a 'dilated' time-space into which visitors are plunged. Then comes Jeremy Blake (USA), a representative of a new generation that has ever more sophisticated technological means at its disposal. Blake's projections _- visual loops of several minutes _- evoke a now mobile combination of Op Art and the large compositions by such artists as Sam Francis and Kenneth Noland. The artist mixes digital images with photographs or film excerpts, thus creating strange associations. In Winchester, he gives his own hallucinatory view of the famous house of Sarah Winchester, widow of the renowned weapon manufacturer: till she died in 1922, she continuously added rooms to the dwelling (more than 160 in total), to escape from the victims of her husband's weapons who haunted her. Blake's films evoke the work of VJ, just as the paintings of Fiona Rae (UK) are samplings of visual elements derived from both contemporary art and popular culture, Miro to Mickey Mouse, Kandinsky to Krazy Kat. This mix-culture is also present in the work of Charley Case (B), as appears from his amazing site, http://www.sangam.be, a visual expedition and an accompanying travel book composed of sketches (published by Didier Devillez). For one of his latest works, the artist filmed, with a bird's-eye view, couples seated in a large peanut cut lengthways, two refugees in a foetal position as if united by their umbilical cord. The projections of these improvised performances on the support that held them (the peanut), endow these human relationships with a ghostly aspect. The colour impressions by Gaston Bertin (F), which are clearly related to the aesthetics of Jeremy Blake, differ from the latter in the more traditional technique used for processing the material: "I draw what I observe, then I create collages, of which I take photographs. These photographs are not abstract, they are interpretations. I use a traditional camera and traditional photographic techniques. I make my own prints.
In another register, light becomes the basic material for Martin Richman (UK): for small objects (his 'bookspaces', luminous spaces that give rhythm to the shelves of a library),
or in the setting of spectacular public interventions (illuminations for London's Docklands and for a factory in Birmingham); his sculptures, composed of colourless mirrors, participate in the dematerialization of the object initiated by the use of light. Barbara Kruger (USA) uses words to attack the images she appropriates in various; the spectator's gaze oscillates between the reproduction and the text, the bearer of an aggressive message that is often linked to a criticism of dominant male power or the consumer society. In this case, the semantic instability is enhanced by a visual effect, by which the lenticular image/message changes in relation to the perspective: Feel is something you do with your hands, on the one hand, Your misery loves company on the other. Katharine Dowson's (UK) large spinal column with a glass skull mounted on it introduces a touch that is more supernatural than macabre - but is it not, like the mirror, an evocation of vanity? Also worth mentioning is the presence, on the evening of the opening, of three clairvoyant visionaries accompanied by a fairy...
Pierre-Yves Desaive.

The first solo exhibition of work by New York artist Carrie Yamaoka with the gallery.

For the past eight years, Yamaoka has worked with reflective mylar, a plastic film coated with a reflective surface. The artist pours resin onto this reflective ground. Referring to this work as painting would be misleading; there are no painted images present. It is empty of content but full of incident. There are air bubbles and swooshes and blips which occur that are the result of process. We are faced with a bendable, pliable, inflected and obscured â€˜mirror' image. Sometimes the viewer is confronted with dizzying vortices of intense color. The works in this exhibition will range from small to large, taking a variety of forms and running a fine line between painting and sculpture: 'koolpops' poured directly onto mylar, pieces mounted on wood panel looking like paintings, pieces encapsulated in a flexible rubber which hangs on the wall and sometimes extends down onto the floor and into the room.

In her own words: 'You could say that the viewer becomes the subject. Or, that the viewer within the space in which the piece is being viewed, becomes the subject. The image arrived at, in any given moment, is contingent upon the viewer's navigation through the space that the painting occupies and reflects. The picture is not static; it's constantly shifting. The viewer makes and re-makes the picture(s) from the conditions that I've set up. I'm more interested in the way we see than in the things that are seen.'

Yamaoka's work comes out of both a Minimalist and Pop lineage. In a review of her 2002 solo show at Debs & Co. in New York, Ken Johnson of The New York Times wrote: 'In time-honored Modernist style (think Robert Ryman), Ms. Yamaoka also toys with the physical support, calling attention to the painting as a hand-made object. Freed of stretchers or underlying panels in most cases, the paintings have undulating surfaces on which you find yourself reflected as in funhouse mirrors. Some have edges fringed by plastic drips; some hang low and bend at the floor. It all adds up to a seductive marriage of voluptuous materialism and rigorous formalism.'