documenta - ?. The exhibition presents works produced primarily in the 1970s and thereby provides an overview of this central create phase of the artist's career. 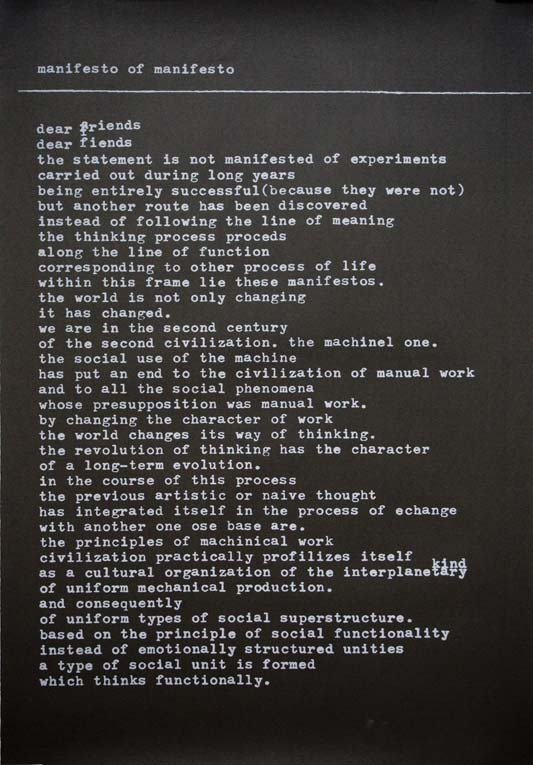 The Croatian artist Dimitrije Bašičević (1921-1987) made his first appearance under the pseudonym Mangelos in a 1968 exhibition in Belgrade. Early text-based work in the form of notebooks created in the 1940s, in which the artist scawled black marks to represent friends and neighbors killed in war, as if they had been stricken from a list, foretells an interest in written language that would persist through Mangelos’ career. In the 1950s and 1960s, his primary materials were notebooks, slates and globes; readymades which he transformed and reinterpreted by inscribing on them letters, words, sentences, Cyrillic or Glagolithic characters and sometimes longer texts in Latin.

With the aim of developing an art that freed itself from metaphorical readings, Mangelos created objects that represented their own negation. His „No-Art“ arose. Through the non-representation of the represented, as in Nègation de la peinture (neg.d.p. IX) (1951-56), by painting over and crossing out existing contexts, a practice that runs through his entire oeuvre, as well as through the use of individual letters and words that, ripped from their context, lose their communicative content, as in glagolitic letter N (1970), Mangelos endeavored to, in his own words, „negate the painting by creating it in the form of words“ and „negate the word by painting it.“ This later work is thus more descriptive than prescriptive, and could also be understood as pictorial art criticism.

These issues are at the core of the exhibition documenta - ?, which presents works produced primarily in the 1970s and thereby provides an overview of this central create phase of the artist’s career. In this period Mangelos frequently manipulated found newsprint and constructed self-composed manifestos. These manifestos are today the most significant source of information regarding the groundwork of his philosophies and his understanding of art.

Dimitirije Bašičević (died 18th December 1987 in Zagreb) held a PhD in art history in addition to his practice as an art critic, curator and artist. In his writing he regularly advocated for the advancement of abstract art in his home country of Croatia. He contributed to the implementation of Salon 54, the inaugural exhibition of abstract art in Yugoslavia, and was the first director of the Gallery of Primative Art in Zagreb. His artistic works, produced under the pseudonym ‘Mangelos’ and as part of the art historian and artist collective Gorgona, remained hidden from the public for the majority of his life. Today his works can be found in numerous prestigious collections such as the Centre Georges Pompidou (Paris), the Tate Modern (London) as well as MOMA / Museum of Modern Art (New York).