Unseen. The exhibition will provide a critical overview of Willie Doherty's photographs and videos made on the streets of his native city of Derry in Northern Ireland and its surrounding hinterland, presenting new insight into the artist's working methods and rationale. 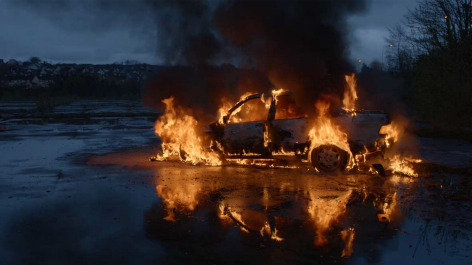 The exhibition will provide a critical overview of Willie Doherty’s photographs and videos made on the streets of his native city of Derry in Northern Ireland and its surrounding hinterland, presenting new insight into the artist’s working methods and rationale.

Since 1985 Doherty has recorded the way in which the city has been shaped and altered in response to unfolding political events as he explored its streets through the simple acts of walking and looking. The title of the exhibition, UNSEEN, refers to Doherty’s self-conscious method of using the camera in a context where it was imperative for him to avoid undue attention and to minimize the risk of being mistaken for a photojournalist or a tourist. The exhibition will reveal how Doherty has used the techniques of photojournalism, documentary landscape photography and the appropriation of images and texts to create a body of photographic work that explores the fine line between fiction and non-fiction.

UNSEEN will present approximately twenty photographic and four video works from throughout Doherty’s career and will examine how the artist evolved the use of image and text in his early black and white works (1985-92) to engage with the complexities of representing a contested landscape.

A number of works from Lapse, a series of black and white photographs made in the 1980s and early 1990s will be shown for the first time; Doherty here investigating how these neglected or 'lost' images shift between the present (and our knowledge and understanding of) the past.

Doherty’s large colour cibachromes (1993-99), exploit the heightened colour of this particular photographic process to create a body of work that plays with the promise of narrative potential, as the images oscillate unsteadily between the staged and the found, the before and after.

UNSEEN will showcase a number of Doherty’s most important video installations that place some of Derry’s best-known and more hidden sites as locations for his narratives. One of the works Remains (2013), was recently acquired by De Pont, after having debuted at Art Unlimited at Basel 2013. Remains was made in a number of locations in Derry that have been used since the early 1970’s to carry out kneecappings, a form of punishment shooting used to control drug use and other forms of so called ‘anti-social behaviour’.

UNSEEN will provide a unique opportunity to appraise the photographic and video work of Willie Doherty in the context where it was produced. The work will be subjected to a different scrutiny, one that has been shaped by an understanding of how things have turned out but is subject to the fallibility of human memory and like photography itself, cannot be relied upon to provide a full account of what happened.

Publication
The exhibition will be accompanied by a 250 pp publication, with full colour and duotone photographs that will for the first time illustrate all of the photographic works that Willie Doherty has made in Derry between 1985 and 2013.

The exhibition Willie Doherty: UNSEEN is curated by Matt’s Gallery, London and The Nerve Centre, Derry. For the show in Tilburg new works have been added.