Playing the goat. Presenting himself both as heroic protagonist and foolish prankster, Hunt's performances can engender an empathetic awkwardness among his audience. 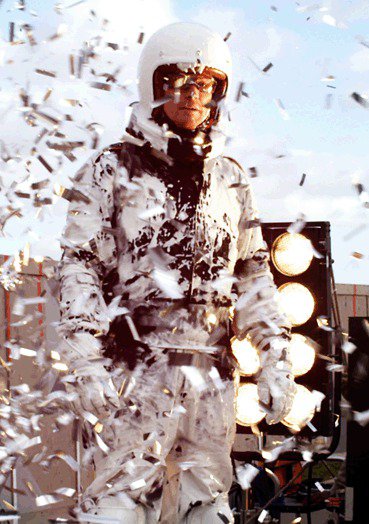 William Hunt's practice is primarily performance-based. In recent years he has presented a number of elaborate scenarios for galleries in which he performs music in physically restrictive conditions; often the residue of these actions might be left as a sculptural installation. He additionally stages work outside the gallery context, which is performed to be documented and later exhibited as video installations and photographs. At a basic level Hunt investigates the communication of human emotion and its relationship to the creative act. Although in extreme contrast to John Baldessari’s 1971 work I Am Making Art – where the artist makes precise and studied gestures while intoning these words with deadpan repetition – Hunt’s performances through very different means and process deliver the same message.

Through his work, Hunt deliberately creates a tension with the viewer. Presenting himself both as heroic protagonist and foolish prankster, Hunt’s performances can engender an empathetic awkwardness among his audience. Through these actions, which are at times almost unbearable to witness, Hunt sets out to test universal truths about what it is to feel joy, pain, love, anger, frustration, isolation, fear, excitement – yet he knows that these emotional states are not absolutes, their definitions can fuse and confuse, especially when realised through the languages of making art. Hunt’s actions are finely balanced on the edge of success and failure, between the absurd and the rational; or, as he has described it, ‘practicing being something else just in case you’re not what you think you are.’

The exhibition at PEER presents two film works. One from 2012 that takes the form of an interview in which the artist responds to questions about the impetus for his work. The detached professionalism of the interview format itself becomes Hunt’s testing ground as an increasingly excruciating and poignant exchange develops between the cross-examiner and the cross examined. This film also lays the ground for the new commission, and his most technically ambitious work to date. In Still yourself and calm your boots, Hunt drives a car at speed into a concrete barrier, out of which he then emerges to continue performing a song about the fragile ineffability of love. The action has been filmed from within and outside the vehicle using a variety of cameras from different angles. The editing of the material stretches the brief moments of the car’s approach and impact into several minutes, over which a multi-layered soundscape has been laid. As viewers to this otherwise irrational act, we are entirely drawn into the immersive cinematic experience. Hunt’s delivery of the song, made all the more desperate as a result of his physical pain from the crash, accentuates his absurd struggle against the tragicomic misfortune of his own creation.

Free Publication: Visitors to the exhibition can pick up an illustrated 16 page booklet with a specially commissioned text by curator and writer Ellen De Wachter

This project has been generously supported by:
The Paul and Louise Cooke Endowment