The Dowry of the Princess of Trebizond 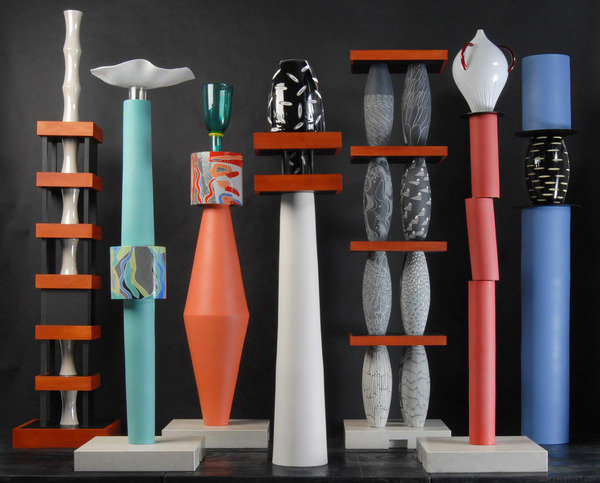 Designer Linde Burkhardt is showing in collaboration with Die Neue Sammlung – The International Design Museum Munich – her project ‘Die Mitgift der Prinzessin von Trapezunt’ (The Dowry of the Princess of Trebizond). Combining ceramics with Murano glass, wood and marble, she has produced seven life-sized and out-sized sculptural objects as free ceramic works. The group of works translates the mythical legend of the Princess of Trebizond into a postmodern statement on the connection between Orient and Occident.

‘On her long artistic path Linde Burkhardt has attained the most mature and profound expression of her creativity to date.’ (Alessandro Mendini)

Adjectives such as multifaceted, refined and numerous describe the highly stacked elements arranged into seven steles and embodying the value of a royal dowry: Like monuments, they represent seven cities of the Empire of Trebizond. The base material is ceramic, complemented by glass, wood and marble. The surface and structure lend each of the elements their own presence and individuality. Defined less by form and more by their content or symbolic value, the objects do not have a clearly designated function. At once abstract and sensual, they encourage the observer to use their imagination and make free associations.

The legend
The Empire of Trebizond was located between Byzantium and Georgia on the south coast of the Black Sea and enjoyed an economic and cultural heyday in the 13th and 14th centuries. The court of the Komnenos emperors became the last refuge of Greek-Byzantine culture in Asia Minor, a hub of the trade routes between West and East.

Empress Johanna reigned between 1330 and 1347; her daughter Esther was, upon her mother’s wish, to be married to the king of Portugal. He was known as young, handsome and particularly bold. Johanna sent messengers to the king with a likeness of Esther and many valuable gifts. The king consented to the marriage and sent his own messengers back to Trebizond bearing his portrait and even more valuable gifts. The princess then set out, accompanied by several eunuchs, on the long voyage to the western edge of the world, as it was known then. As the empress was unsure whether her daughter would ever see her homeland again, she commissioned artists and artisans to make by way of a dowry seven steles that represented Esther’s seven favorite cities in her homeland, namely Amisius, Amastris, Heraclea Pontica, Kerasus, Side, Sinope, and Tios. Die Neue Sammlung wishes to thank artist Linde Burkhardt for the generous donation of ‘The Dowry of the Princess of Trebizond’.

Image: Linde Burkhardt, The Dowry of the Princess of Trebizond, 2010. Photo: Die Neue Sammlung (A. Laurenzo)