The presentation is centered around Schjerfbeck's self-portraits, which, as a crucial field of women avant-garde art, were the artist's preferred genre particularly in the 1930 and 1940s. The Schirn presents more than twenty of Schjerfbeck's portraits of herself. 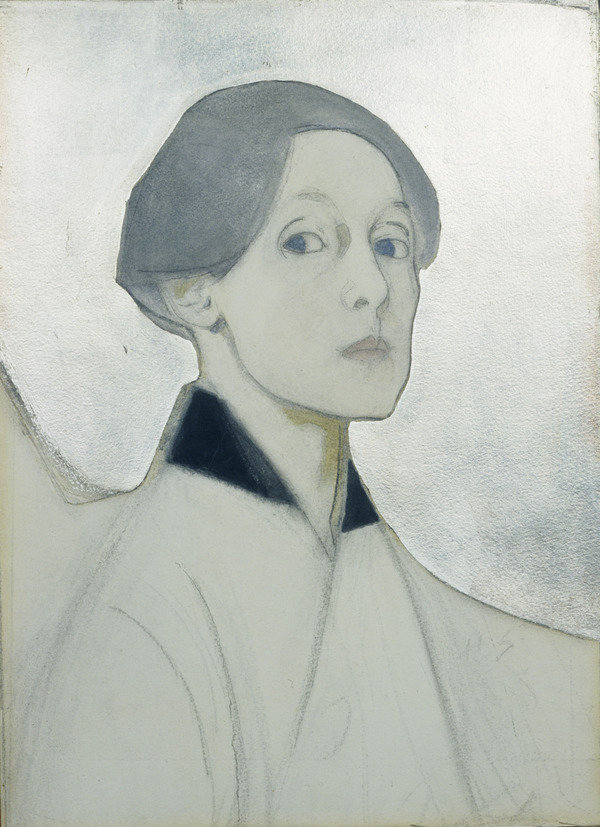 More than eighty-five paintings and works on paper offer a complete view of the painter’s and draftswoman’s daring pictorial world. Still to be discovered by many art lovers in Germany, Schjerfbeck, born in Helsinki, is highly acclaimed and celebrated as a national icon in Scandinavia and particularly in Finland, the Guest of Honor of this year’s Frankfurt Book Fair. She has produced an extensive impressive oeuvre with the human figure at its center: portraits of young women with fashionable accessories, male nudes, pictures of protagonists in historical paintings, and, above all, numerous likenesses of her own. Initially tending toward a naturalistic realism, Helene Schjerfbeck became a modern, avant-garde artist relying on a reduced language of forms and range of colors. Despite her clear penchant for abstraction, the artist remained devoted to figurative painting more than anything else. Her entire work is characterized by the repetition of motifs and the use of visual source material which she assembled to hybrid compositions. These principles are to be found in her impressive self-portraits as well as in numerous works in which she draws on motifs of important old masters such as Hans Holbein the Younger and El Greco or contemporary artists like Constantin Guys. Schjerfbeck also produced a number of extraordinary portraits testifying an increased interest in the fashion of her time – an aspect that has only drawn little attention in art historical research to date and is now explored in more detail in the Schirn’s presentation for the first time. Schjerfbeck was fascinated with portraiture, albeit not in its original sense: the artist rather overturned the classical role of portraiture completely by not rendering the individuality of her subjects. Continuous reinterpretation makes the portraits clearly reflect the artists’s unique pictorial idea. Organized by the Schirn in collaboration with Ateneum Art Museum, Finnish National Gallery the exhibition comprises outstanding loans from the Ateneum and public collections as well as rarely accessible impressive works from private collections.

The exhibition is sponsored by the Friends of the Ateneum Art Museum, Finnish National Gallery “Helene Schjerfbeck is an omnipresent artist in Finland, her work regarded as one of epochal significance, and a portrait of the national icon even decorates the country’s two-euro coin. Finland’s appearance as the Guest of Honor at this year’s Frankfurt Book Fair has provided us with an opportunity to shed light on the artist’s oeuvre in more detail and to present it to a wider international public,” says Max Hollein, Director of the Schirn.

Carolin Köchling, curator of the exhibition, adds “Schjerfbeck’s practice as an artist is based on the selection and combination of pictorial motifs and on the treatment of the visual sources she utilized. Schjerfbeck’s self-portraits are regarded as her main work. Yet, she also created a number of other female portraits: Californian, Spanish and French women wearing kimonos, donning the French fashion of the day, and displaying extravagant clothes and costumes. These works are no portraits in the classical sense of the word but depict figures the artist took from a rich world of images she, inspired by art books and fashion magazines, continuously developed.”

The Schirn Kunsthalle Frankfurt has succeeded in realizing a large-scale exhibition that includes not only works which are representative of and important for Schjerfbeck’s oeuvre but also rarely shown singular art pieces. The array of paintings and works on paper on display spans almost across all periods of the artist’s production between 1879 and 1945. The exhibits are neither presented chronologically nor grouped according to genres but shown along a tour drawing the viewer’s attention to the working method characteristic of Helene Schjerfbeck: drawing on models and visual sources and returning to motifs already dealt with.

The presentation is centered around Schjerfbeck’s self-portraits, which, as a crucial field of women avant-garde art, were the artist’s preferred genre particularly in the 1930 and 1940s. The Schirn presents more than twenty of Schjerfbeck’s portraits of herself, from one of the first works executed in a realistic manner from 1884/85 to her modern “Self-Portrait” of 1912 and the moving, expressionist likenesses of her late years such as “Self-Portrait (An Old Woman Painter)” of 1945. It was in the last two decades of her life that Schjerfbeck produced more than half of her self-portraits, which convey an impression of her entire development as an artist. “Self-Portrait with Silver Background” (1915) exemplarily marks the transition from realistic to modern portraiture, which is primarily characterized by a non-mimetic and clearly pared-down range of colors. Schjerfbeck was no longer concerned with a representation of reality in her works which also implies a break with the tradition of painting passed on in art academies. The reduced use of colors sometimes resulted in a form of monochrome painting in which the canvas or the paper served as the background. This becomes particularly evident in the works the artist produced in the last years of her life which are mostly conceived as head portraits; many of them show just the artist’s face, mercilessly revealing the decay of the human body. Schjerfbeck only rarely visualized her status as an artist in her portraits: we know of only two examples depicting her as a painter with the specific attributes of the profession.

“Self-Portrait with Black Background” (1915) was commissioned by the Art Society of Finland and was to manifest her renown as a Finnish artist. A further “Self-Portrait with Palette I” dating from 1937 is also on display in the exhibition. Works with identical titles such as “The Convalescent” from 1927 and 1938/39 based on a painting of her own from 1888 or adaptions of works like “The Seamstress” (1905, 1927) and “Wilhelm von Schwerin” (1872, 1886, 1927) testify to the fact that Schjerfbeck again and again used her own pictures as models for formal and stylistic reinterpretations.

Copying works by old masters in detail was a common practice in those years’ training of artists which Schjerfbeck also adhered to during several journeys and a study stay in Paris as a young woman. The adaption of individual motifs and styles from paintings by Hans Holbein the Younger or Diego Velázquez, for instance, became particularly important again to the artist in her late work. One of the reasons for this was the lack of models and motifs she found herself confronted with in the remote Finnish villages where she lived from 1902 on. This is why Helene Schjerfbeck fell back on art books and fashion magazines of her day in her search for material. While her “Spanish Lady” from 1928 evokes El Greco’s Madonna figures and her stylish Paris women Constantin Guys’s paintings, the portraits of Dora Estlander take their cue from modern urban women’s pageboy cuts, whereas “Girl in Beret”(1935) is modeled after the filigree French women Schjerfbeck came upon in the Paris fashion magazine Chiffons and other publications.

Although Helene Schjerfbeck was in close dialogue with colleagues and creative artists, her geographical withdrawal went hand in hand with a physical isolation that also granted a certain artistic independence. There are no works by contemporary artists that might be compared to her male nudes, for example. The exhibition at the Schirn presents two of her extraordinary feats in this field.

Even though Helene Schjerfbeck’s career was quite unusual for her time and is frequently idealized and turned into a myth, the presentation does not primarily regard this modern artist’s oeuvre in the light of her life but lets it stand for itself – variable in its style, experimental in color and technique, striking in its impact.

Biographical sketch
Helene Schjerfbeck was born in Helsinki in 1862. Her childhood was not a very happy one: it was clouded by her elder sister’s death, an accident resulting in a lifelong hip damage, and her father’s death when she was thirteen years old. Though her mother ignored her talent for painting, she began her academic training with the help of a teacher. The young woman set out to study for Paris, Rome, Florence, Saint Petersburg, Vienna, and other places. Whereas French and English women artists had to be prepared to come up against numerous restrictions in their professional training toward the end of the nineteenth century, female Finnish artists were institutionally encouraged and supported as far as possible. Schjerfbeck studied paintings by Renaissance, Baroque and Mannerist old masters such as Giotto, El Greco, Franz Hals, and Rembrandt throughout the museums of Europe and became thoroughly engrossed in the genre of historical painting, but she also devoted herself to her contemporaries’ achievements, to the works of Pierre Puvis de Chavannes, James McNeill Whistler, Paul Cézanne, and Edgar Degas. She was impressed by their motifs and compositional schemes, their use of color and treatment of surfaces, which would remain a lifelong source of inspiration for her. She participated in the Paris World Exhibition of 1889, where she showed her naturalistic painting “The Convalescent” (1988), for which she was awarded a Bronze Medal. By copying and working after models, Helene Schjerfbeck developed a style of her own and a specific method of painting: she reduced the pictorial elements of her compositions, focused on details, and experimented with different media (canvas, paper), techniques (oil, watercolor, gouache, a.o.), and colors.

In 1894, she started teaching at the Finnish Art Association’s Drawing School. After leaving the institution in 1902, she moved to Hyvinkää with her mother. Despite the small village’s geographical isolation, she actively corresponded with many a contemporary. Regularly exchanging letters with artist friends, she discussed issues of literature, fashion, and events in the European centers’ art scenes. In the late 1920s, gallery owner Gösta Stenman, her art dealer, encouraged her to also paint new versions of her own works. Schjerfbeck relied on both extant pictures and persons sitting in front of her, endowing them with elements of her rich pictorial world in the process. In spite of her deteriorating health, she continued to show her work at exhibitions, e.g. in Sweden, where she moved to after the outbreak of the Second World War. Without seeing her native Finland again, Helene Schjerfbeck died in Saltsjöbaden in 1946 at the age of eighty-three.

DIGITORIAL: Free of charge, the new digital education offer in German and English allows the public to get into the right mood for the issues of the exhibition before visiting it. The digitorial presents instructive particulars, comprehensive relationships, and background stories combined in a novel visual way on the website. It can be retrieved from the website www.schirn.de/schjerfbeck/en/.