The exhibition brings together the work of three of today's most esteemed artists, Katharina Fritsch, Jeff Koons, and Charles Ray. The exhibition seeks to highlight the potential of sculpture today and is the first in which these groundbreaking artists can be seen together in appreciable depth. 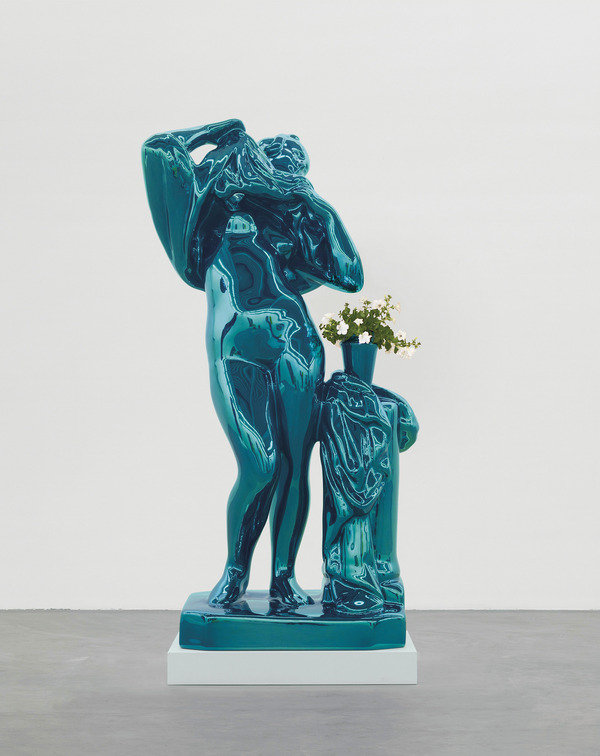 In October 2014 the Moderna Museet will premiere Sculpture After Sculpture, a major exhibition that brings together the work of three of today’s most esteemed artists, Katharina Fritsch, Jeff Koons, and Charles Ray – three innovators whose parallel endeavors have reinvented the traditions of their art form. The exhibition at the Moderna Museet seeks to highlight the potential of sculpture today and is the first in which these groundbreaking artists can be seen together in appreciable depth.

When these far-flung artists came of age, in the early 1980s, the work they are known for today – pointedly figural, quotidian in reference, resolutely sculptural – was all but unrecognizable as the shape of serious art to come. The history of sculpture in the modern period had witnessed the rise of abstraction, the assault of the readymade, the turn to Minimalism, and the “post-medium” environmental and social experiments that followed – a sequence that could be understood as a gradual undoing of the traditional art forms as we had known them. Reconsidering these developments, by this time avant-garde orthodoxy, Katharina Fritsch (b. 1956), Jeff Koons (b. 1955), and Charles Ray (b. 1953) not only located their practices within sculpture’s traditional conventions, they reengaged representation generally and the representation of the figure in particular. The art on view in Sculpture After Sculpture, then, may come after sculpture’s supposed demise, but it also comes after in another sense, being made after – in the image of – the art form it would reinvent. The way these sculptors have folded the experiments of the twentieth century into the complex statuary of the twenty-first is the story this exhibition sets out to tell.

“An exhibition by any one of these artists would count as an event for the Swedish art world; to be able to present all three under one roof marks an unprecedented occasion. In their early work, all three artists seemed to rely on the possibilities that Marcel Duchamp had opened up with his readymade. How can this legacy be explored today, in our increasingly commodified society? It should hardly be a surprise that the Moderna Museet, a key institution for Duchamp and for the American Pop artists, would champion these questions,” comments Daniel Birnbaum, the Moderna Museet’s Director.

A focused examination of thirteen masterworks, Sculpture After Sculpture begins with iconic works from the late 1980s and early ’90s that highlight the artists’ early relationships to the commodity and the readymade. The exhibition unfolds in a series of startling juxtapositions that trace the development of their practices from the found to the made, from the performed to the embodied. Fritsch, Koons, and Ray share a bold approach to new fabrication technologies, an obsessive attention to the nuances of craft, and a commitment to the power of the singular object or image. What sets their work apart from the art that preceded it is not only a shared reengagement with representation and the figure, but also the fact that all three have, in whole or in part, located their endeavours within the traditional discipline of sculpture. The exhibition’s highlights include Koons’s celebrated Michael Jackson and Bubbles, 1988, a porcelain-and-gilt confection depicting the late Pop legend with his pet chimpanzee; Ray’s two-ton aluminum Tractor, 2005; and Fritsch’s acid-yellow apparition Madonnenfigur / Madonna, 1987 that famously materialized on a busy square in Münster, Germany, on the occasion of Skulptur Projekte Münster.

“Revealing surprising affinities among the artists, but also contrasting decisive differences, Sculpture After Sculpture examines the pressures that have inspired Fritsch, Koons, and Ray to reinvent the art of sculpture to the new millennium,” says Jack Bankowsky, curator of the exhibition.

The exhibition will be accompanied by a fully illustrated catalogue published by Hatje Cantz Verlag. The catalogue will include commissioned essays by the noted art historian and critic Prof. Thomas Crow; Dr. Nicholas Cullinan, curator of Modern and Contemporary Art at the Metropolitan Museum of Art, New York; and Mr. Jack Bankowsky, head curator of the exhibition.

The exhibition at Moderna Museet is sponsored by Brummer & Partners, Clear Channel and Blasieholmen Investment Group.

Artist talks 10 and 11 October
In conjunction with the opening of Sculpture After Sculpture, visitors can meet Charles Ray in an artist talk, and Jeff Koons in conversation with Daniel Birnbaum. Tickets are available on the Moderna Museet website: Artist talks

Roundtable discussion
Six months before the opening of Sculpture After Sculpture, the Moderna Museet joined forces with Art Center College of Design, in Pasadena, California, to host a roundtable discussion anticipating the exhibition. Approaching the occasion as an ideal workshop, curator Jack Bankowksy called on five thinkers – Michael Fried, Isabelle Graw, Scott Rothkopf, Michelle Kuo, and Charles Ray – to consider the concept of the show and the questions it raises. The discussion was recorded at Art Center’s campus on April 17, 2014, and is published in the catalogue.