Rythmes Sans Fin. Through some eighty works, including paintings, drawings, reliefs, mosaics, models and photographs, the exhibition explores the relatively unknown second period in the work of this exponent of 'pure painting', that of the years after the Great War. 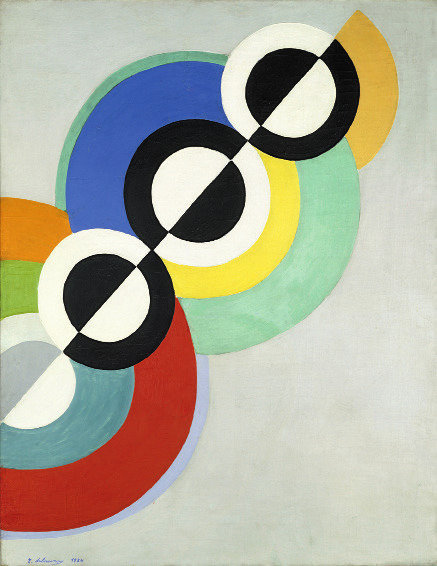 The exhibition “Robert Delaunay: Rythmes sans fin” reveals the extraordinary wealth of the Centre Pompidou’s holdings of the work of Robert and Sonia Delaunay. Thanks in particular to the substantial gift to the nation made by Sonia and her son Charles in 1964, these are unequal- led in the world.

Through some eighty works, including paintings, drawings, reliefs, mosaics, models and photographs, the exhibition explores the relatively unknown second period in the work of this exponent of “pure painting”, that of the years after the Great War. It was then that Delaunay escaped the constraint of canvas and stretcher, beginning in the 1930s to engage with architectural space in the production of mural works. Under the influence of such urban novelties as the gigantism of the Eiffel Tower, the impact of the advertising hoarding, and the electrification of street lighting, Robert Delaunay had seen modernity as a visual excess, a submer- sive optical sensation – a monumental, dazzling blaze. The act of seeing itself thus became the photo: subject of his painting as he investigated simultaneity. Acting directly on the viewer’s sensibility as Jacqueline Hyde / Centre Pompidou, it did, for Delaunay this painting had a “popular aspect”, in pursuit of which he extended his work MNAM-CCI / Dist. RMN-GP into the wider environment of interior decoration, cinema and architecture.

The coloured discs of the pre-War years found themselves transformed into circular modules which – repeated to infinity – became synonymous with the rhythm of modern life. In 1935, Delaunay showed painted reliefs entirely novel in technique that made use of a wide range of materials, the surface animated by the play of textures. The artist intended nothing less than a revolution in art, no longer confined to the picture plane but embracing the space of architecture, light and colour coming together in total rhythm.

“I’m Making Revolution on the Walls” The second part of the exhibition is devoted to the astonishing mural decorations that Robert Delaunay produced, collaborating with the young architect Félix Aublet, for the Palais des Chemins de Fer and the Palais de l’Air that were such a sensation at the Paris Exhibition of 1937. Together with models, preparatory studies and architectural plans from the French National Archives, a slide-show-type presentation of hitherto unpublished photographs from the collection of the Centre Pompidou’s library, the Bibliothèque Kandinsky, will bring this spectacular project to life again for the exhibition.

“Robert Delaunay: Rythmes sans fin” offers a new and contemporary reading of the work of Robert Delaunay, according it a place in the history of modern art that goes beyond the Orphism and the Optical Abstraction to which it is too often reduced The catalogue of the exhibition to be published by Editions du Centre Pompidou will feature numerous essays, including one on mural art in the 1930s and another on Robert Delaunay’s own rare and often unpublished writings from the period 1924 to 1930.