'Inventing the Possible' explores with selected video varying degrees of humour or feeling for tragedy. 'Garry Winogrand' is the first retrospective of the great American photographer. 'Eszter Salamon' offers multiple perspectives on the fragile and permeable construction of identity. 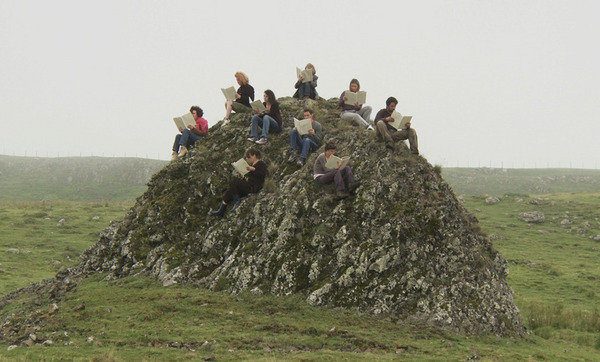 In 2010, the Jeu de Paume presented "Faux Amis”, first in the "Ephemeral Video Library" series, which was devoted to the representation of history in contemporary art, through the prism of memory, identity, and loss. Titled "Inventing the Possible”, this second in the series is oriented towards what happens afterwards, examining the invention of a possible future or a utopian future. "We dreamed of utopia and we woke up screaming,” declared the Chilean writer Roberto Bolaño, in his “infrarealist manifesto”.

The selected videos explore, with varying degrees of humour or feeling for tragedy, our perplexity in the face of the failure of the modernist utopias and the attempts at re-evaluation that have been made since the end of the 20th century. This second "Video Library" also invites us to reflect, within this context, on the possibility of finding models of change. Conceived as a mixed, open installation, it enables the public to watch videos freely on individual screens, and also to discover these same works projected on a large screen.

By offering visitors the chance to create their own programme and to return whenever they like to the rooms dedicated to the project, this second part of the "Ephemeral Video Library" is intended above all to be a provisional archive of videos made over the past ten years in very varied contexts and regions: from the desert in Kuwait to the Amazonian rainforest, from the north of Canada to Senegal and Indonesia. A selection of these videos is also available to young visitors in the Jeu de Paume’s educational space, and there a program me of screenings and encounters with artists will run in parallel.

Documentary or fiction films, animated, experimental or performance films, the selected videos often present accounts that are imbued with a layer of mystery or enigma. These works all have the aim of creating new energies, building imaginative possibilities awaiting a potential realisation. Imagining, in the original Latin sense of the word (imaginary), means creating images in order to be able to invent. Thus, these videos raise questions articulated around themes that frequently intersect with each other, such as the re-evaluation of the past, the ecological sensibility, the impact of education and the notion of “community”. These works invite viewers to invent new possible alternatives.

For this event, the Jeu de Paume is creating an app that will include a mission statement by the project’s curators, extracts from various works, interviews with the artists, together with essays, some unpublished, that analyze both the subjects raised in the works and the question of the omnipresence of video in contemporary art.

The Jeu de Paume presents the first retrospective in twenty-five years of the great American photographer, Garry Winogrand (1928–1984), who chronicled America in the post-war years. Winogrand is still relatively unknown because he left his work unfinished at the time of his death, but he is unquestionably one of the masters of American street photography, on a par with Walker Evans, Robert Frank, Lee Friedlander andWilliam Klein.

Winogrand, who photographed “to see what the world looks like in photographs,” is famous for his photographs of New York and American life from the 1950s through the early 1980s. Organized jointly by the San Francisco Museum of Modern Art (SFMOMA) and the National Gallery of Art, Washington, D.C., the exhibition “Garry Winogrand” brings together the artist’s most iconic images with newly printed photographs from his until now largely unexamined archive of late work, offering a rigorous overview of the photographer’s complete working life and revealing for the first time the full sweep of his career.

The photographs in the exhibition and the accompanying catalogue will create a vivid portrait of the artist, a chronicler of postwar America on a par with such figures as Norman Mailer and Robert Rauschenberg, who unflinchingly captured America’s wrenching swings between optimism and upheaval in the decades following World War II.

While Winogrand is widely considered to be one of the greatest photographers of the 20th century, his overall body of work and influence on the field remains incompletely explored. He was enormously prolific, but largely postponed the editing and printing of his work. Dying suddenly at the age of fifty-six, he left behind approximately 6,500 rolls of film (some 250,000 images) that he had never seen, as well as proof sheets from his earlier years that he had marked but never printed. Roughly half of the photographs in the exhibition have never been exhibited or published until now; over 100 have never before been printed.

The exhibition is divided into three parts, each covering a broad variety of subjects found in Winogrand’s art : “Down from the Bronx” presents photographs taken for the most part in New York from his start in 1950 until 1971; “A Student of America” looks at work made in the same period during journeys outside New York; and “Boom and Bust” addresses Winogrand’s late period—from when he moved away from New York in 1971 until his death in 1984—with photographs from Texas and Southern California, as well as Chicago, Washington, Miami, and other locations. This third section also includes a small number of photographs Winogrand made on trips back to Manhattan, which express a sense of desolation unprecedented in his earlier work.

Winogrand was known as great talker with a flamboyant, forceful personality, and what he said accompanying his slide shows and lectures was often imaginative and very funny. Excerpts from a video made in 1977 will allow visitors to experience the living Winogrand.

PARTNERS
“Garry Winogrand” is organized by the San Francisco Museum of Modern Art and the National Gallery of Art, Washington.

Combining performance, documentary work and self-fiction, Eszter Salamon offers multiple perspectives on the fragile and permeable construction of identity. By developing doubles of herself, she both rethinks the medium and the material, the unique body and the speech that serves to circumscribe it. A body, my body – a vacant space, an unknown territory given individual identity by a name, a jumble of memories, facts, sensations. How can these multiple strata be captured? How can we draw up a map that enables us to appropriate them?

For the solo work Mélodrame, she conducted a series of interviews with one of her homonyms she had met in Hungary. In “Eszter Salamon 1949”, she proposed an expanded version, this time situated in the precise space and time of the exhibition. For four weeks and for six hours every day, the Jeu de Paume will resound to the voice and echoes of this diffracted, amplified life, identity within identity. Reciting the words exchanged between one Eszter Salamon and another, the actresses Véronique Alain, Désirée Olmi et Frédérique Pierson, will embody these subjective snippets – where a chance name comes up against historic events and anecdotes.

How can biographical material occupy and subvert a place of conservation? What kind of mirror do these figures, with their uncertain status, hold up to us? Capturing the discrepancy between a body and speech, shifting the relationships of identification, “Eszter Salamon 1949” introduces confusion into the very nature of “me” and the empathy felt when it is on display. An act of transformation, starting out from the tiniest fragment of personal experience, turning it into “an anonymous and infinite fragment, a becoming that is always contemporary” (Gilles Deleuze).

PARTNERS
The Fondation Nationale des Arts Graphiques et Plastiques contributes to the production of works in the Satellite program.

The exhibition is co-produced by the Jeu de Paume and the Festival d’Automne, as part of the outside programmation of the FIAC.
It was realized with the help of the Goethe Institute (Paris), The Cité Internationale des Arts (Paris) and the Centre National de la Danse (Pantin Île-de-France).

The Jeu de Paume is a member of the Tram and d.c.a networks, association française de développement des centres d’art.