New paintings and sculptures by Sean Landers. The constant torrent of words that characterized Landers' first word paintings has been transformed into a multi-colored echo chamber, a visual representation of the thoughts banging around inside his head. In the Gallery 2 Dedication Association: the exhibition includes drawings by Renato Orara and works of varying media, printmaking and painting by Aric Obrosey; curated by Laura Mackall 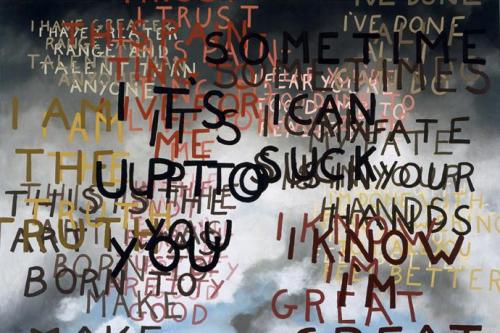 Andrea Rosen Gallery is pleased to present an exhibition of new paintings and sculptures by gallery artist Sean Landers. The constant torrent of words that characterized Landers' first word paintings has been transformed into a multi-colored echo chamber, a visual representation of the thoughts banging around inside his head. As always with Landers' work, self-parody and sincerity are inextricably intertwined. Viewers familiar with his earlier text works will recognize his trademark statements of grandiose artistic aspiration alongside those of utter despair. This relentless inner monologue, representative of the mental process of making art, has been a constant subject of the artist's work since his first solo exhibitions in New York in the early 1990's. It is the truthfulness of what Landers depicts and the uncomfortable yet humorous familiarity of his words that give these works their resonant power.

The honesty that characterizes Landers' language also manifests itself in his animal/human portraits and sculptures. While the text pieces are clearly addressed to an art world audience, these works express an almost innocent relationship to art-making. Landers has commented on the fact that he makes these works for his immediate audience, which is often himself and his four-year-old daughter. Each figure is uniquely imagined and fully formed â€“ they seem as familiar and as fantastic as characters in a well-known fairy tale. Without regard for history or theory, these works nakedly display the joy Landers takes in being an artist.

Sean Landers was born in Palmer, Massachusetts, in 1962. He received a BFA from the Philadelphia College of Art in 1984 and an MFA from Yale University School of Art in 1986. The Zurich Kunsthalle will present a one-person exhibition of his work in August. A comprehensive catalogue will accompany the exhibition.

The careful and obsessive making of the work in this show could imply that everything is defined and explained outright. However, Aric Obrosey's and Renato Orara's incessant fine tooling and outstanding technical knack are secondary to their abilities to transform their technology into work with its own life. This exhibition includes drawings by Renato Orara and works of varying media, including printmaking and painting, by Aric Obrosey.

Aric Obrosey's intricate, sometimes repetitious, designs and layers are mesmerizing to look at. At first, ''Lace Field (Paris Star)'' seems like it was mechanically made. It was, in a sense, but the â€˜machine' was Obrosey himself. Using one-inch square ebony blocks that he hand carved and then stamped precisely to cover a 50 x 50 inch piece of paper, he makes stars and hexagons out of ropes bound together. The resulting ground is not only a beautiful surface pattern, but also looks like it might be climbable, like a wall of rope at a playground. Other pieces, such as ''Lace Fragment'', incorporate elemental lace units to produce what could be the physical manifestation of a musical rhythm, from a staccato beat to a melody. Despite the extreme care that is required to make each piece, Obrosey's work leaves the impression that his process has an intuitive and nearly spontaneous element.

For over a decade, Renato Orara's medium has been ballpoint pen on a small piece of paper; depicted is a single item. Similar to the Zen meditation that he has studied, his artistic practice is an exercise in contemplation - both in the time each piece takes to make and for the viewer. Though his subject matter is uncomplicated - a vegetable, a toy, a tool - his interest and the outcome has its own transcendent reality. The definition of the object represented is secondary to the many associations that Orara's drawings conjure, due to what the object is or, more simply, the shape that it is. Attended to with results similarly seen in scientific renderings, Orara's deft and meticulous touch nods to the historical role of documentation that drawing has occupied. However, because of his unapologetically compulsive execution and his choices of subject and placement the whole is very much outside of science and quite emotional in effect.