''Dugout is a love story, an investigation into how memory is invented... a kind of Supernatural-Jazz-Sport-History-Ghost-Blood-Fiction.'' Terry Allen. The viewer is drawn into an overwhelming multimedia environment rich with visual, aural, and sensory information. Adrian Meraz will transform the Project Room of the Santa Monica Museum of Art into a cocoon-like environment inhabited by a series of unlikely sculptures, creating a microcosm of skeletal interventions 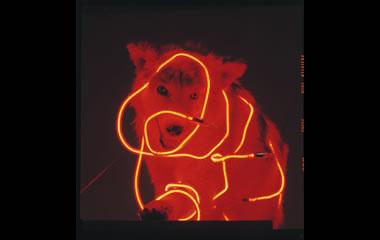 Terry Allen
Dugout II (Hold on to the house)

''DUGOUT is a made up world, constructed and based on the true stories and lies I heard and experienced as a boy growing up on the flat sprawl of West Texas. Built very loosely on the lives of my parents, it is about baseball and music and a man and woman who play them across the endless idea of America during the late 19th Century and first half of the 20th Century. It is also about the new paranoid post bomb wilderness and unexpected Outer Space arrival of their teenage 'WHATSIT' son (WARBOY), their continuing shock at this creature... not to mention his own shock. ''DUGOUT'' is a love story, an investigation into how memory is invented... a kind of Supernatural-Jazz-Sport-History-Ghost-Blood-Fiction.''
Terry Allen

From February 28 to May 15, 2004, Santa Monica Museum of Art presents DUGOUT II (HOLD ON to the house), by artist and songwriter Terry Allen. Terry Allen describes DUGOUT II (HOLD ON to the house) as ''An audio/visual investigation into the End of the World, how memory blows up and changes everything, and how Atomic monsters take over the Earth.'' The exhibition is a prelude to the theater piece, DUGOUT III: WARBOY (and the backboard blues). For the exhibition, Allen has created a deconstructed house with suspended, separate room tableaux, in each of which a visual narrative unfolds. The viewer is drawn into an overwhelming multimedia environment rich with visual, aural, and sensory information. The soundtrack for DUGOUT II (HOLD ON to the house) will be the audio recording of the live performance from the Skirball Theater of DUGOUT III (WARBOY and the backboard blues). Allen first began working with the themes he explores in the DUGOUT series in the 1994 radio play DUGOUT, which he wrote, directed, and produced on commission from New American Radio.

In addition to the exhibition at SMMoA, three other major Los Angeles cultural organizations are participating in a celebration of the art, music, and theater of Terry Allen, providing a uniqueâ€”and the firstâ€”opportunity for audiences to enjoy DUGOUT in its entirety: L.A. Theatre Works at the Skirball Cultural Center presents performances of the new multimedia play DUGOUT III: WARBOY (and the backboard blues), March 3, 4, 5, and 7, 2004, www.latw.org; L.A. Louver presents the exhibition DUGOUT I from March 4 to April 10, 2004, with an opening reception on March 6, www.lalouver.com; and LACMA Institute for Art and Cultures presents DUGOUT CONVERSATION, featuring Terry Allen, actor Jo Harvey Allen, and writer and critic Dave Hickey, on March 8, 2004, www.lacmainstitute.org.

Artist and songwriter TERRY ALLEN was born in Wichita, Kansas, and raised in Lubbock, Texas. He received his B.F.A. from Chouinard Art Institute in Los Angeles. He works in a variety of media, including music, performance, sculpture, installation, painting, drawing, video, theater, and radio. Allen's eleven CDs include the classic Lubbock (On Everything) (1979). The recipient of numerous awards and fellowships, including Guggenheim and National Endowment for the Arts Fellowships, his work is in many public, museum, and private collections. A member of the Buddy Holly Walk of Fame since 1997, Allen and his wife, actor and writer JO HARVEY ALLEN, live in Santa Fe, New Mexico.

Adrian Meraz will transform the Project Room of the Santa Monica Museum of Art into a cocoon-like environment inhabited by a series of unlikely sculptures, creating a microcosm of skeletal interventions. He explains that within this cavernous space, the sculptures ''gather unsequentially, roamers, as notations emerge like cities that have come and gone.'' The range of complex and fragile forms, as well as the memories and experiences they evoke, are reflected in Meraz's amalgamated and fractured title.

Meraz constructs intricate objects and alternative worlds infused with humor and wonder from such unassuming materials as Popsicle sticks, felt, toothpicks, plywood, and newspapersâ€”a futuristic yet atavistic cityscape formed of paper bags; a book transfigured into the infinity of a Mobius strip; and an unplayable musical instrument encased in a warren of top secret compartments. ''My work investigates subtleties between motion and paralysis,'' notes Meraz. He sees his art ''as a vehicle to channel through or filter the ever accumulating of information'' an exploration of the inter-relationship between ''the malleability of an idea, and the potentiality of a thing that functions and dysfunctions, both seen and unseen.''

Meraz received his B.F.A. from Otis College of Art, Los Angeles. A recipient of a 2003 California Community Foundation Grant, Meraz is currently enrolled in the M.F.A. Program in Sculpture at Yale University in New Haven, Connecticut.