This second edition presents a select group of 25 international galleries from Europe, the Americas, and Japan. In conjunction there are talks, and the exhibitions "I See A Big Apostrophe" and "Beyond the Pages". 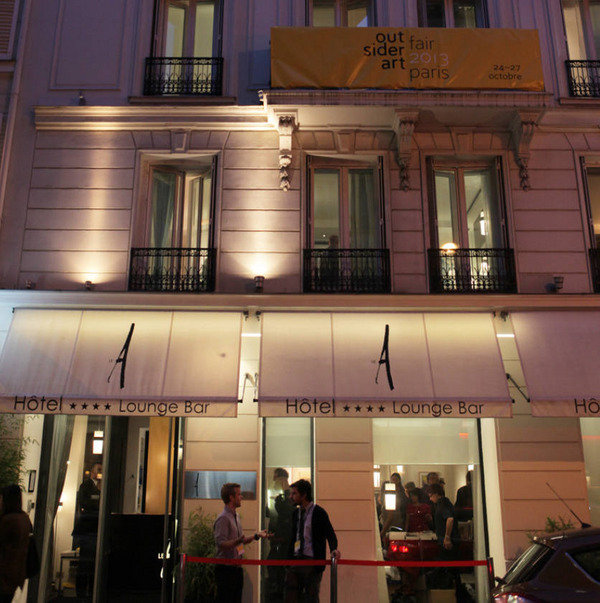 After the groundbreaking success of its first French edition in 2013, the Outsider Art Fair will return to Paris with a select group of 25 international galleries from Europe, the Americas, and Japan. The fair will take place between October 23 and 26, 2014, again at the elegant boutique hotel, Hotel Le A.

The Outsider Art Fair, now in its 22nd year, is the world’s foremost annual show of outsider art and art brut. Responding to the ever- widening audience for self -taught art within the broader art world, the OAF’s Paris edition is timed to coincide with FIAC, Paris’s high -profile contemporary fair.

This year’s roster of exhibitors includes both specialists in the fields of outsider and folk art and astute contemporary art galleries, together representing a fertile cross-pollination between the worlds of self- taught, vernacular, and mainstream art. Visitors will have a chance to see the extraordinary creations of such iconic outsiders as Aloïse, Eugene Von Bruenchenhein, James Castle, Henry Darger, Madge Gi ll, Martin Ramirez, Bill Traylor, George Widener and Anna Zemankova, along with works by more recently discovered artists like Felipe Jesus Consalvos, Guo Fengyi, Dan Miller, M’onma, and Mehrdad R ashidi.

Wide Open Arts, the producer of the Outsider Art Fair, is pleased to welcome back many of last year’s exhibitors, including the esteemed Yukiko Koide Presents from Tokyo, with a selection of Japanese Art Brut; Cavin - Morris Gallery (New York), Fleisher - Ollman Gallery (Philadelphia), Henry Boxer (London), Galerie du Marché (Lausanne) and the celebrated Creative Growth Art Center from Oakland, California, which has nurtured such contemporary talents as Judith Scott, whose solo exhibition at the Brooklyn Museum will open concurrently with the fair.

Galleries exhibiting at OAF Paris for the first time include Sao Paulo’s Galeria Estação, whose lineup of artists is comprised of several who made their Paris debut at the 2012 Cartier Foundation’s Histoires de Voir exhibition, and Paris’s own La Pop G alerie. Also new to the fair are the contemporary art galleries Air de Paris, installing a solo show by Sarah Pucci (the mother of noted American artist Dorothy Iannone) and New York’s Louis B. James, with a solo presentation of the meticulous and colorful drawings of marching bands by New Orleans artist Bruce Davenport Jr.

Other exhibitors making their OAF Paris debuts are Winter Works on Paper from Brooklyn, which will present an exhibition of vernacular photography and Aymeric Rouillac, whose room will be dedicated to the French creator of visionary environments Chomo (Roger Chomeaux, 1907 – 1999). A collaborative effort between the highly regarded dealers Jennifer Pinto Safian (New York) and Gloria Cohen (Paris) will offer new works by Argentine, Marcos B ontempo.

Highlights of the fair’s extended programming feature a group exhibition in the hotel lobby organized by Anne et Julien, founders of the quarterly review Hey! and curators of the current exhibition, “ Tattooists, Tattooed ” at Musée du Quai Branly. Daniel Baumann, curator of 2013’s Carnegie International, will assemble films, recordings, and readings of texts by poets and outsiders, including Christopher Knowles, Robert Walser, and Adolf Wölfli. Halle Saint Pierre, Paris’s premier venue of outsider art and art brut, and the fair’s institutional partner in France, will install its reference library of books, catalogues and reviews on outsider, primitive, and Art Brut on the hotel’s sixth floor. Fairgoers will also have the opportunity to see the new exhibition of Bruno Decharme’s seminal collection abcd/art brut at la maison rouge.

By bringing local organizations dedicated to Art Brut like Halle Saint Pierre, la maison rouge, and the collection abcd into dialogue with international galleries, curators , collectors and scholars, the Outsider Art Fair Paris aspires to further expand the current discourse on the art of self - taught creators, as well as pay homage to the seminal role of Fr ance in the history of Art Brut.

• OAF TALKS
- In conversation: Bruno Decharme and Antoine de Galbert Saturday, October 25, at 10:00 a.m., Bruno Decharme, the Paris - based film - maker, art collector and founder of the Collection abcd, will spe ak with Antoine de Galbert, a collector of contemporary art and the founder of La Maison Rouge, about their activities as collectors and issues related to the field of art brut . The art critic and former art dealer Stéphane Corréard will serve as moderator .

• I See A Big Apostrophe , curated by Daniel Bauman n and Franziska Glozer, consists of specially chosen words, books and references to poetic and other kinds of texts, all of which will call attention to both the appearance of written language and the multifaceted character of words. Baumann , curator of the Adolf Wölfli Foundation at the Museum of Fine Arts, Bern, and the newly appointed director of the Kunsthalle Zurich, and Glozer, an art historian and independent curator, will exami ne the work of Walter Abish (b orn 1931), an Austrian - American experimental writer, whose book, Alphabetical Africa (1974), took a constrained, conceptual - art approach to the use of words. In addition, I See A Big Apostrophe will explore American poet Hannah Weiner’s (1928 – 1997) clairvoyant use of words and “automatic” writings seen in New York’s 1960s avant - garde h appenings scene . The presentation will also look at t he “found poems” of the American artist Bern Porter (1911 - 2004).

• On view in Hotel Le A’s lobby will be Hors les pages ( Beyond the Pages ), an e xhibition curated by Anne and Julien, the creators of the magazine HEY! modern art & pop culture and curators of the current exhibition Tattooists, Tattooed at Paris’ Musée du Quai Branly. The installation will feature artworks represented by many of the fair ’s exhibitors , becoming in effect a three - dimensional version of Anne and Julien’s printed magazine. Reflecting the eclectic spirit of their publication, the lobby of Hotel Le A will resemble both an art lover’s studio and a cabinet of curiosities.