Jack Pierson has curated a group exhibition titled "Tomorrow's Man" with 4 artists and historical works by the "Vienna Action Group". Liza Lou presents a tsunami of color and random pattern. 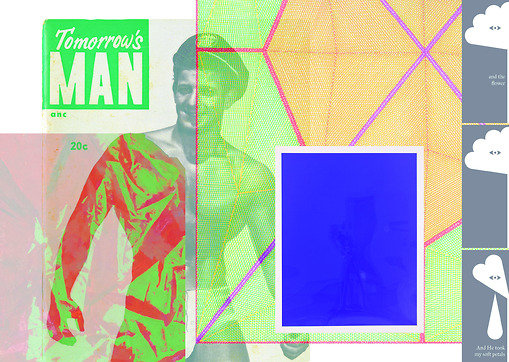 Jack Pierson has curated a group exhibition titled Tomorrow's Man. Pierson started this project some months ago with a publication of the same title.

When Bywaters Bros publishers offer to publish a monograph on Jack Pierson’s work, the artist considered a new form of publication. He imagined a book that brings together his own works associated with images of different origins, prints and drawings that he collects and that inspire him. He also invited young artists to contribute their work. The result is an unconnected compilation of themes and styles forming the miniature encyclopaedia Tomorrow's Man, whose title comes from a bodybuilding magazine popular in the 1950s and '60s.

To coincide with this album, Jack Pierson brings together the work of some of the artists to exhibit under the same title. The exhibition at Galerie Thaddaeus Ropac is intended as a second chapter in the Tomorrow's Man project. Pierson invites artists Evan Whale, Alex Jovanovich, Richard Tinkler and Florence Derive to take part, and also includes historical works by the "Vienna Action Group" artist Rudolf Schwarzkogler.

The album itself does not follow a particular theme or layout, intending it more as a collection of things and artists that he likes for a wide variety of reasons. Most of the artists are young and little known. Pierson’s aim is to publish a 12-volume series with continuing works by the same artists as well as other participants.

Galerie Thaddaeus Ropac is pleased to announce the third solo exhibition with the gallery of American artist, Liza Lou.

For this exhibition Lou, who divides her time between studios in Los Angeles and the province of KwaZulu-Natal, South Africa, explores the surface commonly accepted as the ground for art – the canvas – making it into the subject of the work. At first glance, the 12 works in this exhibition appear to be paintings, and indeed they follow the prescription for painting in that they are woven material stretched across stretcher frames. On closer examination however color and gesture do not exist on the surface but are imbedded into the very structure of the canvas itself, each work comprising of millions of glass beads woven together to create one unified whole.

Ixube in isiZulu means random, and it is from this premise that the artist developed this current body of work. In her Durban studio, Lou blends large vats of glass beads in a process not unlike blending paint and then packages and distributes hundreds of grams of each blend to the members of her Durban collective to be woven into long strips. The instructions from Lou contain the request that no discernible pattern be made in the weaving. After several months, the strips are returned to Lou’s studio from the townships of KwaZulu-Natal, and inevitably reveal unintended subtle preferences in the weaving and color choices of the individual women. The artist then edits and assembles the individual strips to create a single unified field which is then woven and stretched across steel stretcher bars.

The resulting works display a tsunami of color and random pattern, with surfaces that can’t be fully known or comprehended in a single viewing. From randomly sequenced material, Lou composes structured and rhythmic works, images that are pixelated but also loosely impressionistic. Within a slow and methodical discipline, chaos and structure coexist. Lou’s exploration of process has resulted in minimal, contemplative works, which are mediations on their own making and on the random and unexpected possibility of beauty.

Lou is the recipient of a 2002 MacArthur Foundation Fellowship.

A publication will accompany this exhibition with an interview of the artist by Timothée Chaillou.