Collection Study III: Art in Europe after 1968, with works by such artists as Hanne Darboven, Jannis Kounellis, Luciano Fabro and Art & Language are combined with pieces from the archives and photographic documents in a setting designed by Richard Venlet. Contemporary on view: important works by Francois Morellet, and Jean Schwind retrospective. 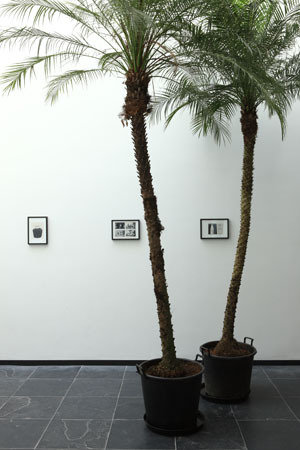 Starting in September, the S.M.A.K. is presenting an exhibition entitled ‘Collection Study III: Art in Europe after 1968’. This study project, launched in 2012, has resulted in a presentation about the exhibition ‘Art in Europe after 1968’, which Jan Hoet mounted in 1980. Works from the original exhibition by such artists as Hanne Darboven, Jannis Kounellis, Luciano Fabro and Art & Language are combined with pieces from the archives and photographic documents in a setting designed by the Brussels artist Richard Venlet.
The S.M.A.K. is dedicating this project to Jan Hoet, the founding director of Ghent’s Museum of Contemporary Art, following his death in early 2014.

‘Art in Europe after 1968’, an exhibition mounted by Jan Hoet in the Museum of Contemporary Art and St Peter’s Abbey in Ghent in the summer of 1980, had an international appeal. The artists participating were selected by an international panel which, apart from Jan Hoet himself, also included such people as Johannes Cladders, Piet van Daalen and Karel Geirlandt. This was the first time that European art was viewed in the light of the American Minimal Art that was predominant at the time. It was also in this project, with works of art by Barry Flanagan and Daniel Buren, that Jan Hoet initiated the Ghent tradition of contemporary art in public space, which has been continued from ‘Chambres d’amis’ (1986) through ‘Over the Edges’ (2002) and ‘TRACK’ (2012) to present activities at the S.M.A.K.

‘Art in Europe after 1968’ not only made the museum much more widely known, but also had a major effect on the expansion and significance of the collection. For the first time, Jan Hoet had the resources to give substantial shape to the collection by acquiring such prime works as Panamarenko’s The Aeromodeller, Joseph Beuys’ Wirtschaftswerte and some major pieces from the Italian Arte Povera. The importance of these key works provided the stimulus for an in-depth study of the significance to the S.M.A.K. collection, and by extension to Belgian art history, of the exhibition ‘Art in Europe after 1968’.

The present exhibition takes this study as its starting point and charts the earlier exhibition, its origins, and its importance to the collection, all on the basis of a number of major pieces from the collection and a selection of archive and documentation material. With the aid of numerous documents, letters, photos, reports, excerpts from audiovisual material, draft sketches, plans and so on, from archives both at the museum and elsewhere, it was possible to make a reconstruction of this crucial period in the history of the museum.

‘Collection Study I’ was the ‘Inside Installations’ project (2010), and ‘Collection Study II’ took the form of an exhibition entitled ‘Museum for a Small City’ (2013), whose curator was the artist Richard Venlet.

Philippe Van Cauteren on Richard Venlet’s contribution to the exhibition

‘Richard Venlet (1964, Hamilton, Australia) examines how and in what context art is presented and how this plays a part in determining the viewer’s experience. He questions the museum space and the architecture of viewing. His analysis does not result in the criticism of the institutions we were familiar with in the 1960s and 1970s, but is based on a fascination and respect for art and artworks. In addition to artworks, he regularly incorporates items from archives, documents and exhibition material into his contextual installations; he only rarely produces an autonomous work of art.
In 2006 Venlet created the spatial presentation of the ‘Recollecting Landscapes’ research project for the S.M.A.K. and, more recently, in 2013-14, for his exhibition ‘Museum for a Small City’, he made use of a small selection of works from the museum’s collection and archives. His collaboration with the S.M.A.K. for the design of ‘Collection Study III: Art in Europe after 1968’ is a continuation of these projects. On this occasion, Venlet’s interest in museum collections and their history is combined with the question of how ‘Art in Europe after 1968’ (1980), one of the more important exhibitions in the history of the S.M.A.K., can be reactivated and presented to the public in an interesting and captivating way.
For the visual element of this exhibition, Venlet used the graphic symbol of the original exhibition, which was based on a triangle, as a ready-made and template. Rather than reconstructing the design of ‘Art in Europe after 1968’, he sought a way to visualise the intention, and the documentary and artistic nature of this new presentation. Richard Venlet’s intervention is visible and tangible, but at the same time it relates discretely and respectfully to the works of art shown.’

The exhibition will be accompanied by a publication on the study project and a programme of public activities in which Koen Brams and Dirk Pültau, both closely acquainted with the museum and the collection, will explore various elements by means of interviews, talks and debates. Another aspect of the programme of public activities will be linked to the exhibition ‘The Sea’ that will be held in Ostend (through Mu.ZEE) this autumn as a tribute to Jan Hoet. Additional information on the public activities will be available later.

In 2012 the S.M.A.K. received a generous bequest from the estate of the Brussels collector Henri Chotteau (1947-2012). It consisted almost entirely of important works by the French artist François Morellet (1926, Cholet). Chotteau had an extraordinary passion for Morellet’s oeuvre. He had already donated works by this artist to the S.M.A.K. in 2004 and in the context of the solo exhibition in 2007. The museum now possesses 24 works by Morellet from Choteau’s collection, making it one of the most significant ensembles in the world.
Morellet’s oeuvre has clear links with the Op Art and Kinetic Art of the 1960s. His geometric compositions of lines, squares and triangles arise out of the systematic application of predetermined rules. He also allows chance to play a part in this controlled process of creation. This results in neutral, universal images from which subjective choices are as far as possible excluded. But it would be too limiting to approach Morellet’s oeuvre only from this angle. His titles not only offer a phlegmatically serious insight into the way the works came about, but often also have a humorous double meaning. Morellet, ironic and deliberate, elegantly puts into perspective his self-imposed artistic rules and, more broadly, also the myth of creation and the earnestness of art, thereafter returning to a more serious view.

On the occasion of this bequest, the S.M.A.K. is publishing a book with contributions by Philippe Van Cauteren, Valérie Nimal, François Morellet, Thomas McEvilley, Sonja Klee and Rolf Quaghebeur. It will be launched at the opening of the exhibition.

Jean Schwind (1935-1985) was the most notorious and enigmatic figure in Belgian art in the 1970s. After studying French literature and working as a research assistant at Ghent University, at the end of the 1960s he found his way into the art scene. In 1970 he showed large format erotic drawings at the Fitzroy Gallery in Brussels, and the following year exhibited the Schwind Collection, a series of remakes by the nouveaux réalistes. The confusion was only increased by the fact that hardly anyone knew who was behind this pseudonym. In the context of the Schwind Foundation, he then set up pseudo-exhibitions of successful art using the same procedure, calling them ‘hommages’ or ‘appropriations’; the movements and artists he covered included arte povera, Christo, Fontana and Broodthaers.
His interventions soon became more conceptual and in 1974 he took part in overview exhibitions of contemporary art in Antwerp and Bruges. He also worked on a Belgian collection, whose crowning work was a large funeral wreath and the words ‘A notre cher art belge/Schwind’ on the tricolour ribbon. In 1976 a fictitious announcement of his death put an end to a short but intense career that conflicted with the unwritten rules of the art world.

The S.M.A.K. is presenting works and documents by this artist, who is often seen as the missing link in the Belgian art of the 1970s. A monograph will be published to accompany the exhibition.

The exhibition is produced with the support of ‘Sonuma'

S.M.A.K.
Jan Hoetplein, Gent, Belgium
Opening hours
The museum is closed on Monday. Tuesday through Sunday from 10 am to 6 pm.
Closing time cash-desk: 30 minutes before closing of the museum
Entrance fees
€ 12: individual visitor
€ 9: groups up to 15 persons, 65+ years, inhabitants of Ghent.
€ 2: young people under the age of 26
For Free: for children up to and included the age of 18, disabled and persons accompanying groups.