For his second solo show the artist will present 'like' a new series of abstractal paintings focus on the space filtered through multiple dimensions including imagination memory and time. 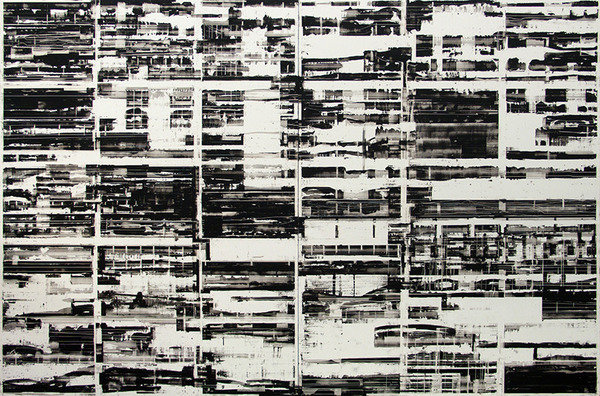 Von Lintel Gallery is pleased to announce LIKE - an exhibition of new paintings by Canan Tolon.

This will be the artist's second solo show with the gallery. In early 2014, Parasol unit foundation for contemporary art in London mounted a major retrospective of Tolon’s work, presenting pieces from 1986 until the present, including a series comprised of 33 ink-wash and crayon figurative drawings acquired by the British Museum and a large-scale, oil on clay board installation titled, Time After Time. The installation will be on view as part of the Los Angeles exhibition.

Tolon is primarily interested in “landscapes of absence.” Her paintings study the conceptualization of space filtered through multiple dimensions including imagination, memory and time. Though her technique of repetitious gestures that scrape and slice oil paint across slick surfaces may initially present as pure geometric abstraction, a longer gaze will uncover transient urban scenes and sprawling constructions resembling photographs of places and events. The effect is as if viewing a time-lapse simulated reality through the lens of a kaleidoscope. They are paintings that are LIKE something else, becoming an exercise in perception suspended between truth and illusion, stasis and flux.

LIKE is a word used to connect analogous things or to describe things that are visually inaccessible or absent. It attributes language to the pool of images culled from the world and stored in the mind. When overused (an unfortunate symptom plaguing the current vernacular), the references will ricochet into an elusive, fragmented picture obscuring the original message. The key to decoding it, is finding a familiar link within the buildup. Tolon injects this concept into her practice by layering forms within overlapping matrices, enticing the viewer to discover a proprietary narrative that evades easy description.

Canan Tolon was born in Istanbul and grew up in various European countries. She studied design and architecture in Edinburgh and London before receiving a Masters in Architecture from the University of California at Berkeley. Exhibiting internationally since 1984, prior shows include the San Francisco Museum of Modern Art; the British Museum, London; Parasol unit, London; Rotterdam’s Museum Boijmans Van Beuningen; the Istanbul Modern Museum and London’s Saatchi Gallery. In 2012, Art + Auction named Tolon as one of the 50 Next Most Collectible Artists. Tolon lives and works in the California Bay Area.