The new sculptures Kader Attia exhibits are busts, arising from the artist's collaboration with traditional craftsmen in Bamako (Mali) and Brazzaville (Congo). Allegory of the Cave Painting is a dual exhibition which assembles modern and contemporary painters, who provide a polyphonic answer to the prehistoric Bradshaw-paintings in Australia. 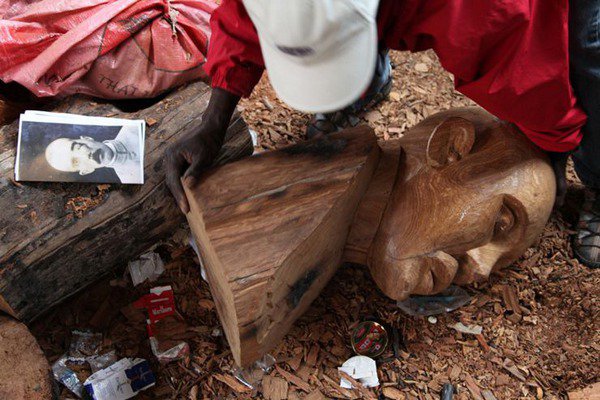 Attia’s 2012 installation The Repair from Occident to Extra- Occidental Cultures was one of the absolute high points of the dOCUMENTA (13) show and marked the genesis of a continually expanding series of works on the arresting theme of ‘Repair’, which the artist explores in his signature style. Through his installations, Attia shows observers how the meaning ascribed to objects and materials grows and coalesces throughout history, and how this reflects in cultural interaction, often in the context of colonial domination or conflict.

The exhibition ‘Culture, Another Nature Repaired’ at the Middelheim Museum consists of two parts.

The new sculptures Attia will exhibit are busts, arising from the artist’s collaboration with traditional craftsmen in Bamako (Mali) and Brazzaville (Congo). They were inspired by a series of photographs of les gueules cassées (the broken faces): soldiers badly disfigured in the First World War, many of whom were drafted from the colonies. These portraits of mutilated war victims do more than just reveal the brutish nature of urgent medical treatment a century ago; under Attia’s touch, they are transformed into a new representation of human existence, forged from the fusion of influences arising in African-Arabian and Western sculpture. In these two cultures, the ethics and aesthetics of the human body are understood and experienced in two entirely different ways. Attia draws from both to create a new and inventive hybrid.

The sculpture group will be confronted with reinterpreting the monumental open-air work Al Aqsa, an installation containing more than 350 cymbals, which debuted that year at Les Tuileries in Paris. The reference in the title instantly calls to mind the Al-Aqsa mosque in Jerusalem, which, in light of the recent conflict in the region, lends the work a profound and political meaning regarding the Israel-Palestine question. But the composition of cymbals on steel rods evokes an equal association with plants or water lilies, making not only its installation in the museum’s former flower garden logical, but also its place within the Western sculptural traditions of land art and sound sculptures: the wind and rain ensure that the installation engages in dialogue with the natural elements and serves as their extension. The 350 cymbals sway back and forth like bronze leaves, inviting visitors to make contact with pebbles and coins. That makes the installation the object of musical and simultaneously silent contemplation, a piece that makes us think about our place within the natural world and about the contempt with which we treat it today.

Allegory of the Cave Painting
The Other Way Around

Middelheim Museum and Extra City Kunsthal jointly present: a dual exhibition which assembles modern and contemporary painters, who provide a polyphonic answer to the prehistoric Bradshaw-paintings in Australia.

These prehistoric North-Western Australian rock paintings are continuously rejuvenated by their “living” pigments.

The exhibition in Extra City approaches the Bradshaw paintings as an organism that extends across time and space and reflects on methods of making and thinking about pictures, on the scenographies of light and shadow that accompany myths of the origin of painting and the birth of knowledge. The central aspect of the exhibition in the Middelheim Museum is the dialectic of intimacy and knowledge of our relation with art objects.

Allegory of the Cave Painting. The Other Way Around in the Middelheim Museum - as second part of the exhibition in Extra City – assembles artworks of, amongst others, Ciprian Mureşan, Michèle Matyn, Alon Levin, Navid Nuur and Hans van Houwelingen, that dialogue with artists from the museum’s collection, like Dan Graham, Ann Veronica Janssens and Medardo Rosso.