With almost 500 works, around 70 different artists, 20 films, paintings, sculptures, drawings, objects and a variety of documents, the exhibition reflects the tensions of that period in 9 interconnecting spaces. 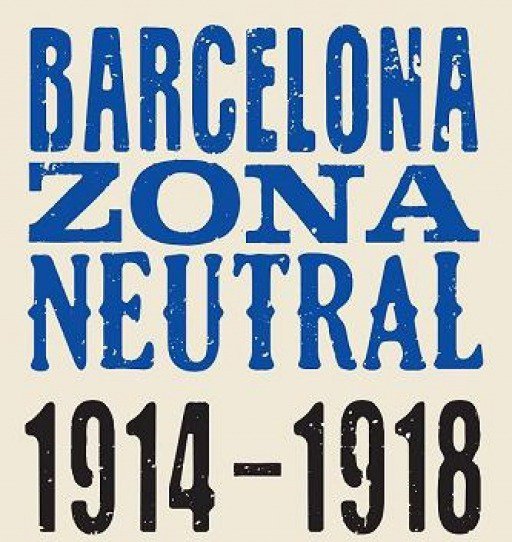 Barcelona, Neutral Zone (1914-1918) is an exhibition that seeks to highlight the visual registers present in Barcelona during the First World War and to show how the city underwent a transformation in all areas, paving the way for avant-garde expression.
According to the curators, Fèlix Fanés and Joan Minguet, the point of departure lies in something that Josep M. de Sagarra said: “During the years of the Great War, Barcelona bade farewell to the 19th century”.

Barcelona, Neutral Zone at a time of war coincided with a period of big business, great opportunities, civic and political movements, secret, opulent lives, great prosperity and enormous tensions. In short, there was both a social and a creative explosion. To commemorate the centenary of the outbreak of the First World War in 1914, Barcelona, Neutral Zone (1914-1918) retraces the path that runs from the modernity of fin-de-siècle Paris to the avant-garde movements of the early 20th century.
With almost 500 works, around 70 different artists, 20 films, paintings, sculptures, drawings, objects and a variety of documents, the exhibition reflects the tensions of that period in nine interconnecting spaces.

The Great War. Sixteen million dead and twenty million wounded. This was the inventory of destruction left by the arms industry on the battle fields. In this section, there are works by the painters Léger, Kubin, Heckel and Nash, photographs of the dead and mutilated at the front, propaganda posters, press cuttings and postcards from this war, the first in the mass media age.

Modernity and the Avant-Garde. Paris became a Mecca for all artists pursuing modernity at the end of the 19th century and a School of Paris was created. The early years of the 20th century saw the transition from modernity to the emerging trends of avant-garde art, whose exponents, as will be observed, arrived in Barcelona en masse once war had broken out. Miró, Togores, Sunyer and Hugué reworked influences and created a model of their own, while people even talked about Barcelona’s own School of Paris. The presence of Sunyer in this section is important for gaining an understanding of Cézannism.

Bourgeois and Proletarians. Barcelona, which was experiencing profound social and political changes, became the capital of anarchism and all types of international socialism, taking the 1917 strike action in La Canadiense as a reference. Of note in this section are a photograph by Josep M. de Sagarra and the film by Gaumont Pathé. Worker unrest is practically invisible in the photographs of the period, but on the other hand there are numerous examples of photographs of employers and the Civil Guard.

Barcelona and the War portrays the rivalry between the supporters of the Allies and Germany in the city. Apa (Feliu Elias) and Ricard Canals, Josep Clarà and Ramon Pichot show us their stance with respect to the war. An insight is provided into the front of the First World War with hitherto unpublished illustrations of the journey made by Dr. Solé i Pla and Ramon Casas to visit the “Catalan volunteers” who were fighting at Verdun and Reims.

The City of Ivory. The title of a book of poems by Guerau de Liost, this refers to an idealised image of Barcelona – the dream of the noucentistes – which laid the foundations of the economic and cultural infrastructures of contemporary Catalonia: railways, science and language academies, roads and libraries, the underground, the telephone and industrial schools. The sculpture by Josep Clarà and the painting by Josep Obiols have their counterpoint in the drawings of Passarell and Picarol and the erotic books of Ricard Opisso (Bigre).
The Exhibition of French Art. The annual Salons were not held in Paris due to the war, and exceptionally 1,400 works including oil paintings, sculptures, drawings and prints were transferred to Barcelona in the spring of 1917, where they made an enormous impact. Pieces by Pissarro, Rodin, Sisley and Denis were shown. The selection of works was extremely conservative, the most modern piece being a painting by Matisse. Works acquired by Catalan collectors during that period are now exhibited here for the first time.

Exiles. Barcelona saw the arrival of artists escaping from the war, such as Picabia, Gleizes, Otho Lloyd, Robert and Sonia Delaunay, and Olga Sacharoff, thanks to the gallerist Josep Dalmau, who played a key role in dramatically shaping the artistic options of the period. Picabia went on to publish his magazine 391, and Brangulí and Co de Triola photographed the 1916 boxing match between Arthur Cravan, anarchist poet and younger brother of Otho Lloyd, and Jack Johnson.

Picasso 1917. Picasso returned to Barcelona in 1917 to follow the tour of the Ballets Russes, of which his future wife Olga Koklova was a member. Picasso's stay in the city caused a stir in the press at the time. His set designs for the ballet Parade by Diaghilev, Satie and Cocteau, the publicity material for the show, and some of the works that he produced during these months in Barcelona are displayed in this room.

Leisure, Consumption and Mass Society. The introduction of the Sunday Rest Law in 1904 led to an explosion of available leisure activities, and organisers turned to advertising as a way of reaching the masses: sporting events, theme parks, bullfights, circus and film – the heart of the new 20th century culture. This last section illustrates the flourishing consumption of leisure through visual material produced by mechanical means: posters, magazines, photographs and films. It includes the projection of the first comic anti-war film of the 20th century, Charlie Chaplin’s Shoulder Arms.

Barcelona, Neutral Zone (1914-1918) shows how the Great War was a crossover period between the 19th and the 20th centuries, transforming the model of life in Europe.