The Distance to Things -The Proximity to Things. This exhibition brings together an important early selection of nineteen photographs and over thirty drawings from the 1960s and 1970s, operating in the bounds between figuration and abstraction. 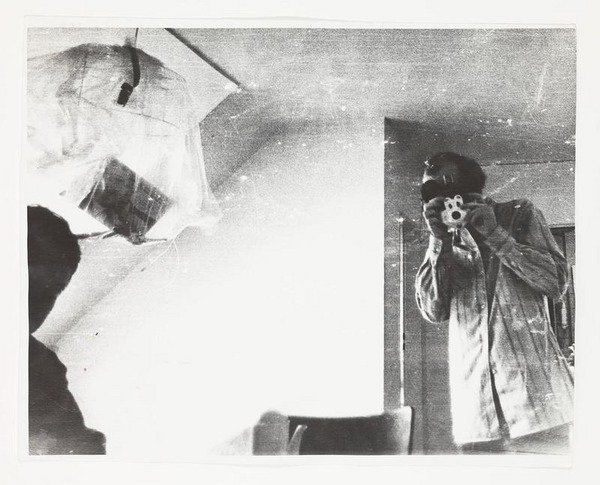 Paul Kasmin Gallery is pleased to announce The Distance to Things – The Proximity to Things, a solo exhibition of unique photographs and works on paper by Sigmar Polke from the Carl Vogel Collection, on view November 11 – December 23, 2014 at 297 Tenth Avenue, New York.

With a career spanning over five decades, Polke is recognized as one of the most experimental artists of the past fifty years. Following his large scale retrospective at The Museum of Modern Art in New York this past spring and currently on view at the Tate Modern, London through February 2015, this exhibition brings together an important early selection of nineteen photographs and over thirty drawings from the 1960s and 1970s, many of which have never been exhibited. The variety and rarity of this group of works from Vogel, Polke’s lifelong friend and supporter of his artistic development, provides the viewer with an intimate glimpse into Polke’s creative life during a most critical period. Operating in the bounds between figuration and abstraction, reality and illusion, and representation and transformation, Polke blurs distinctions while altering our traditional sense of perception. Throughout these intrepid years, the artist experimented with subject matter, materials, and technique. The resulting photographs and drawings demonstrate his unique vision and shed light on the integral role that these works played in the artist’s oeuvre.

Polke travelled extensively, documenting his life with his 120 mm Rolleiflex and 35 mm Leica cameras. These were his tools for seeing and exploring his surroundings, photographing unexpected landscapes and interiors, portraits and self-portraits, and otherwise mundane subjects he found enchanting through the lens. Fascinated with the possibilities of the photographic medium, Polke often played with motion blur and multiple exposures, his open mind and deft hand able to capture images that brim with an uncanny vitality.

Essentially a self-taught photographer, Polke treated the darkroom as an alchemist’s lab, experimenting with the prescribed methods of developing and fixing gelatin silver prints as a means to summon magic from the scenes he had captured on film. His unconventional chemical manipulations, exposure techniques, printing processes, and occasional use of hand-coloring imbue each photograph with a sense of enigmatic strangeness. They are not intended to exist as mechanical perfections, but rather to emphasize chance and experimentation, resisting any straightforward interpretation.

The group of drawings from the late 1960s and early 1970s reflects Polke’s burgeoning interest in issues of perception and representation, continually toying with combinations of figuration and abstraction while questioning both the ordinary and the unfamiliar. His nonsensical diagrams poke fun at our instinct to reason or make sense of the world. Classic themes including ghosts, vibrating figures, and planetary systems abound. Several drawings serve as studies for major works such as People Circle (Photo Circle) I (Menschenkreis [Fotokreis] I), 1968 and Apparatus Whereby One Potato Can Orbit Another (Apparat, mit dem eine Kartoffel eine andere umkreisen kann), 1969. Polke’s satirical diagrammatic compositions emphasize his fervent desire to make visible the arbitrary structure of things.