Eight different artworks in the form of videos, sculptures, photos, interactive or sound installations raise issues that marry aspects of language and economics in various ways. The exhibition features artworks made between 1998 and 2013 which oscillate from analytical or poetic to comic and absurd. 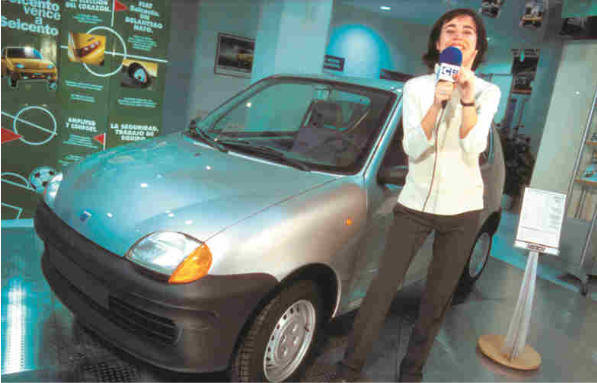 This autum Rochechouart Museum of Contemporary Art presents "Trading in Words" (Le commerce de la parole), an exhibition of recent works that deal with commercial and verbal exchanges. Eight different artworks in the form of videos, sculptures, photos, interactive or sound installations raise issues that marry aspects of language and economics in various ways. The pieces underline how commerce is founded on exchange, first of a purely oral and insubstantial nature then followed by concrete exchange of goods and money. The slightly old-fashioned expression, "to have commerce with someone" (meaning to talk or have dealings with them) is a reminder of this connection with dialogue, commerce as a synonym of social interaction. The exhibition features artworks made between 1998 and 2013 and therefore provides a broad range of approaches to economics, offering views of our current world that oscillate from analytical or poetic to comic and absurd.

In 1968 theorist Marshall McLuhan once famously declared that "money talks" because it is a language of exchange and communications. A few years before Andy Warhol had begun producing his Dollar Bills series of silkscreen paintings that established the image of money as an icon of the 20th century. Similarly, from the 70s on, many artists used their work to examine the position of art within its broader economic context. Although the eight works that are to be displayed in Rochechouart Museum's roof gallery are not primarily on the subject of money, they all reflect how factors such as economics, the stock market, monetary theories and their consequences have impinged upon our contemporary world as it experiences financial upheavals, and how the subject of commerce occupies the minds of experts and laymen alike.

Despite modern man's obsession with finance, the jargon of economics remains for most of us at best hazy if not incomprehensible. This comes over in the theoretical diatribe Chinese artist Quingmei Yao aims at a drinks vending machine - an impossible dialogue opposing marxist and capitalist standpoints. For her part, Natacha Nisic renders readouts of the Nikkei Index in the form of an abstract song that becomes absurdly poetic. Spoken words themselves, so essential to the process of business dealings, can also become a paid-for commodity in a market dominated by service industries, thus raising the question of why one person's words should be more valuable than another's. Andrea Van der Straten's work focusses on the sayings of feminist activist Valerie Solanas (famous for her attempted assassination of Andy Warhol) who makes a living by charging a few dollars' fee for timed periods of conversation. In Neïl Beloufa's film World Domination fictional words become uncannily real as heads of government discuss their plans of how to carve up the world among themselves.

The artist Julien Prévieux displays books he bought at a bargain price from the disgraced stock investment fraudster Bernard Madoff, making us wonder what secrets their pages might reveal about him. Alternative economic models try to sidestep money as a measure of value, often turning to bartering objects or services. Grand troc (The Great Exchange) is artist Matthieu Laurette's own TV game show in which viewers can phone in to barter various objects in exchange for the initial prize of a car. Every barter becomes the new prize object until all that is left to barter is a set of cheap glasses. Exchanging words takes on a new meaning in a work by Alicia Framis. She invites spectators to scream into a microphone and the sound spectrum is then used to print out a unique 3D object visitors can take away with them. Lastly, the sound recorded on surplus audio cassettes remains ineffably silent in Arnaud Maguet's illuminated geometric sculpture.