The Beguiled Eye. For this exhibition the artis presents oil paintings and watercolours that offer enigmatic glimpses into other worlds where modern characters appear within expansive environments, laden with drama. 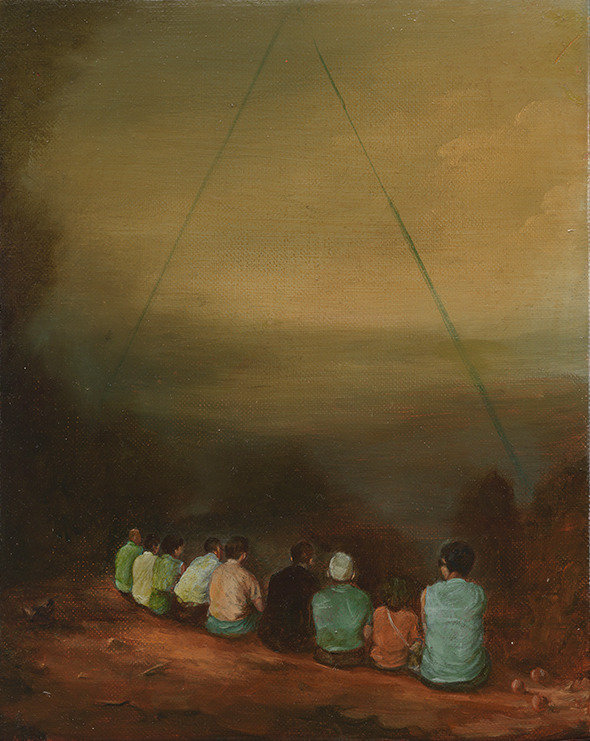 The Beguiled Eye at the University of Edinburgh’s Talbot Rice Gallery is Christopher Orr’s first solo show in Scotland, bringing together new and recent paintings and featuring, for the first time, the artist’s remarkable sketchbooks.

Painting allows the artist to meld these diverse elements into coherent vignettes; people and objects encountering one another in what appear to be significant moments within larger schemes. In some of the scenes, characters parade in 1950s leisure wear into ethereal landscapes, lit by the heavenly skies of romantic painting, or equally, encroached upon by the dark gloaming of science fiction. In others, figures are beholden to strange geometric forms in the sky or stare at scientific models. Many evoke a sense of communion with the sublime, the otherworldly, the strange and the peculiar, while the human characters often remain impassive. Silent One (2010), for example, shows a couple in holiday dress staring into a dark rocky crevice from which emerges a pale, sombre, floating head. The couple are turned away so we cannot see their expressions, but their body language suggests calm acceptance of this strange spectre.

Orr’s use of delicately rendered characters against more expressive backdrops, borrowing from a vocabulary of Old Master’s works, establishes one of the many dialogues within the paintings; meeting points between description and suggestion, the visible and invisible. Changes in scale and the remains of partially erased elements - evidence of the working process - add to the uncanny quality of the works, which nevertheless retain the logical coherence of memory, magic or symbolism. All in a moment through the gloom were seen (2014) depicts three figures looking ahead through luminous shadows: large ghostly figures, creeping across a dimly lit cavern. As with many of the works the true reality of the scene is not disclosed and remains a mystery. Is this a projection - platonic shadows cast across the wall of the cave? Are they prophetic visions? Or are they wraith like forms indicative of fantasy fiction? The viewer is left to decide.

Orr’s sketchbooks, which have never before been exhibited, open out the artist’s methods, offering tantalising glimpses of early tests, unfinished works and a mine of ideas for future work.

The exhibition will be accompanied by a new monograph published by JRP Ringier covering a broader range of Orr’s paintings and collages, an interview between Pat Fisher, Principal Curator of Talbot Rice Gallery, and the artist; with additional texts by Max Hollein, Director of the Stadel Museum, Frankfurt, and The Lonely Piper.

Image: Together We Sing (2013). Christopher Orr