Clerk of Mind. Oblique artefacts emerge from unwieldy social situations that confute the roles of artist and patron, genius and muse. This newly commissioned exhibition reconfigures three of his existing works. 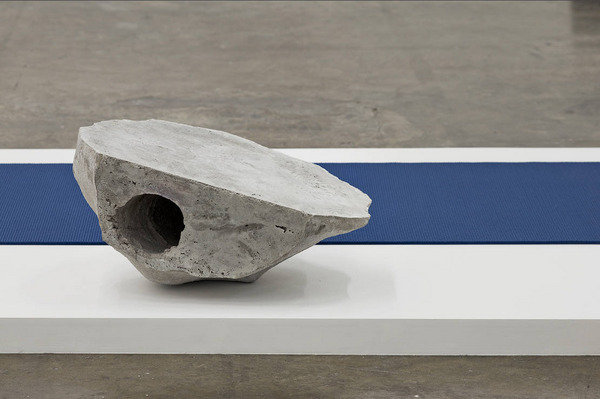 A presentation of works by British artist Chris Evans, curated by Kate Strain.

Chris Evans’ work is characterised by the realisation of unsolicited assignments and evolves through conversations with people from a broad range of professions – selected in relation to their symbolic or public role. Recently this has included the directors of a luxury jewellery company and members of the international diplomatic community.

Collaboration becomes entangled along invisible paths of consultation and negotiation, encased in the resulting art objects they produce. This newly commissioned exhibition reconfigures three of his existing works especially for Project Arts Centre.

On the wall of the gallery, a bronze plaque with a pale grey patina depicts the words ‘New Rules’, whereby two amorphous forms resembling a mountainous landscape are visible through the letters. The ‘L’ of ‘RULES’ extends to form the stem of a wineglass, refracting the background to become its contents.

Housed in a rosewood vitrine, a platinum and yellow gold ring with diamonds, sapphires and helidor – created by fine jewellers, Boodles – is displayed on a jesmonite tablet. Evans gave the press release for the recent Liverpool Biennial of Art to the designers at Boodles and asked them to create a piece of jewellery based on their reading and interpretation of the exhibition’s core ideas. They made the ring (which is on display), and Evans made a relief sculpture to present it and the vitrine to house it. The imagination of a luxury brand gets mixed up with artistic vision, blurring the roles of everyone involved.

Also on display are a series of drawings depicting invasive plant species, solicited from members of the international diplomatic community. These globally rampant and toxic plants are photographed, inverted and then printed as silver bromides. The photographs have, as their counterpart, a series of sculptural forms titled CLODS, arranged around raised white platforms and PVC mats. Each CLOD varies in size, has at least one hole, and bears the traces of its facture: the chunk is first modelled in clay, then cast in concrete mixed with marble. Hollowly echoing urban planning, the CLOD mimics the concrete lump left by the removal of a post or a pipe.

Soliciting the dream life of honchos and henchmen is the crux of Evans’ artworks, exhibited in Clerk of Mind. Oblique artefacts emerge from unwieldy social situations that confute the roles of artist and patron, genius and muse.

Chris Evans, A Needle Walks into a Haystack, 2014. Commissioned by Liverpool Biennial 2014.

You are welcome to join us for the opening of this exhibition on Tuesday 4 November from 6pm – 8pm.