For the exhibitions Bharti Kher unveils a new ensemble of sculptures that have been growing in her studio over the last few years about juxtaposes and transforms found objects. The Present Moment (in B-flat) is an exhibition that includ a body of new works by Anri Sala. 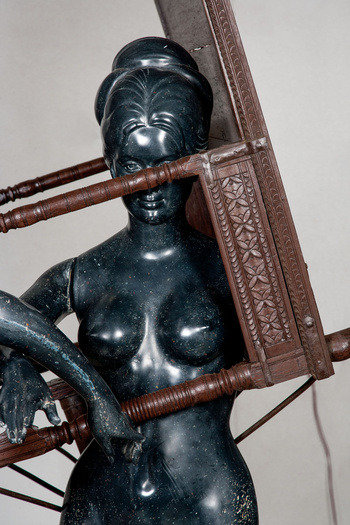 Bharti Kher
three decimal points. of a minute. of a second. of a degree

For her first exhibition at Hauser & Wirth Zürich, Bharti Kher unveils a new ensemble of sculptures that have been growing in her studio over the last few years.

In line with earlier studio practice, Kher assembles, juxtaposes and transforms found objects that are witness to their own histories. Wooden wheels and architectural remnants, mannequin body casts and pillars all clash in mis-en-scene of dystopia and grand orchestration.

These elements are assembled in a hazardous manner; suspended from the ceiling, hanging from ropes, propped up and held from falling with the help of counterweights and balances. Within the gallery, the objects are dramatically illuminated by a ray of light emitted from a searchlight usually used to navigate at sea. Together, the light and objects create a volume within the space – defining it, intersecting it and using all its dimensions like a curvature or ribbon that links all things. The overall impression of this architectural intervention is chaos; uniquely dependant on each object as a marker for the next, the viewer becomes witness to an un-definable domestic narrative; an event past or about to happen.

The only stability in the ensemble is a triangle, the work that gives the exhibition its title, in which a single point of contact holds everything together in perfect equilibrium.

‘It is a mobile that naturally finds balance or a point that marks the place and time and coordinates of where the world can stand still for a minute or a second of a degree. By both defying and accepting gravitational forces all objects can find perfect equilibrium, poise and meaning.’Bharti Kher

The works on display at Hauser & Wirth are individual works, but in this exhibition they form a heterogeneous narrative in which Kher further explores the artistic strategy of stripping objects of their meaning and making them open to misinterpretation and magic, creating alluring works of abstract beauty.

Central to the exhibition are two video installations: ‘The Present Moment (in B-flat)’ and ‘Unravel’. The former consists of different musical renditions instigated by the original score of Arnold Schoenberg’s composition, ‘Verklärte Nacht Op. 4’ (1899), whilst the latter brings together two distinct performances of Maurice Ravel’s ‘Piano Concerto for the Left Hand and Orchestra in D major’ (1929), triggering two competing versions of ‘now’. The exhibition operates like a site where competing instances of the present are encountered and integrated, either by the visitor’s own path across the knotted soundtracks of ‘The Present Moment (in B-flat)’, or the intervention of a DJ in ‘Unravel’, attempting to resolve the tempo disparities between two different executions of the same concerto.

‘The Present Moment (in B-flat)’ is a fictional rearrangement of a piece of chamber music unfolding in a space ending in an imaginary cul-de-sac. Featuring a sextet of two violins, two violas and two cellos, this immersive audio-visual installation beckons one through the gallery, across different stages and locations.

Solitary notes from the appearance of each new tone in Schoenberg’s original score are initially released and drift across the space, as if expelled from the main body of the music. Subsequently, one hears the source from which they originated (‘Verklärte Nacht Op. 4’) in tandem with their successive accumulation at the far end of the hall, where they have been seemingly trapped in a dead-end, a space where acoustic memory is condensed.

Some notes, all belonging to the B-flat tone, extend their journey farther to conclude in a film, where they are instantly transformed into a series of recurring movements of shoulders, elbows, arms, and hands; the physical manifestation of musical gestures. Each member of the sextet plays his or her respective B-flat, until the advent of the next B-flat tone in Schoenberg’s original score replaces it, hence attending and supplying the foregoing moment until relieved by the forthcoming.

‘Unravel’ debuted at the Venice Biennial in 2013 alongside ‘Ravel Ravel’. In ‘Ravel Ravel’ two separate performances of Maurice Ravel’s ‘Piano Concerto for the Left Hand and Orchestra in D major’ gradually shift out of unison, one evolving slightly slower then the other, first creating a slight echo, then a doubling with the notes heard twice, and eventually catching up, only to shift again. Whilst inquiring the very same issues of time, tempo and awareness of space, ‘Unravel’ disentangles the interlocked tempo differences of ‘Ravel Ravel’.

A DJ named Chloé, standing in the middle of the main space of the German pavilion at the Venice Biennial endeavours to sync together the aforementioned executions of Ravel’s Concerto. Each of the recorded performances play in a separate vinyl on a separate turntable. While with her left hand the DJ speeds up one record of the concerto in anticipation of an imminent tempo decrease in its interpretation, her right hand fittingly slows down the concerto in the other record. Her hands zigzag both left hand performances, cancelling the tempo disparities.

Both, Ravel’s ‘Piano Concerto for the Left Hand and Orchestra in D major’ and Schoenberg’s ‘Verklärte Nacht Op. 4’, act in Sala’s film installations as documents of their own time, prompting events and procedures that were presaged by each of them: the former entices along its course varied manifestations of phasing and jazz syncopation, whilst the latter encounters in its trajectory atonality and serialism (a method of composition that uses a series of values to manipulate different musical elements). Furthermore, ‘Unravel’ and ‘The Present Moment (in B-flat)’ focus likewise on specialised movements and cyclical gestures, such as the surgeon–like movements of the DJ, or the musicians’ precise gestures performing all the B-flat notes in Schoenberg’s piece, hence producing choreographies that echo events and developments such as chain production, division of labour or specialisation that were to occur only later in history.

Throughout the trail of ‘The Present Moment (in B-flat)’ hang drawings that relate to the leitmotif of tempo. In the series titled ‘Manifestations of motion and affect’, Sala reduces changes in tempo in each composition to a single page. In the drawings he depicts different ways of representing musical time over the history of Western music, in relation to tempo, affect and attitude. The series includes scores by Ludwig van Beethoven, Erik Satie and John Adams. Sala was interested in Beethoven’s score (in Italian) because he was the first composer to use the term ‘quasi’ in his compositions, indicating the manner in which a musician should perform his pieces. Satie’s score (in French) marks the addition of attitude to tempo, instructing musicians on how to play emotively, whilst Adams (in English) gives quantifiable indications that specify all the aforementioned elements of composition. Produced from cut pigment from pencils, these drawings are created through the process of application and removal: nudging, smudging and erasing pigment on the page, Sala plays with the technique of producing through the processes of migrating and extracting.

‘The Present Moment #1507’ is a single drawing that continues the motif of the musical staff. Here the lines of the staves metamorphose into a mass of confusion in the centre stage of the script. The number in the title originates from the camera’s automatic name assignment, as it captured the photo documenting the drawing, embedding in its title yet another instant.

‘A Sudden Shift by a Near Gale’ displays in six consecutive images the very moments of release of 6 firework rockets, their consecutive explosions followed by the time-based process of their disintegration. In this manner, the drawings are physical representations of time.

A series of drawings, ‘Untitled (map/species)’, are displayed on the South wall of the main gallery. Here Sala reworks maps of countries and geopolitical territories through manual manipulation, skewing and warping representations of land mass so that they fit within the boundaries of the found etchings of biological species with which they are exhibited. As the frame helped classify and simultaneously seek to constrain their subjects in etchings of the XVIII century, the margins of Sala’s map/species series restrict the geographical representations that they house. Hung within the space of ‘The Present Moment (in B-flat)’, these works highlight the predisposition of the latter to coexist alongside other works, whilst remaining independent of any communality besides being together then and there.