A Stage for Architecture and Art. The diverse contributions explore the relationship between representation and imitation, reality and fiction. Architects and artists have produced new works which reveal their different disciplines' sources, references, influences, methods and collaborations. 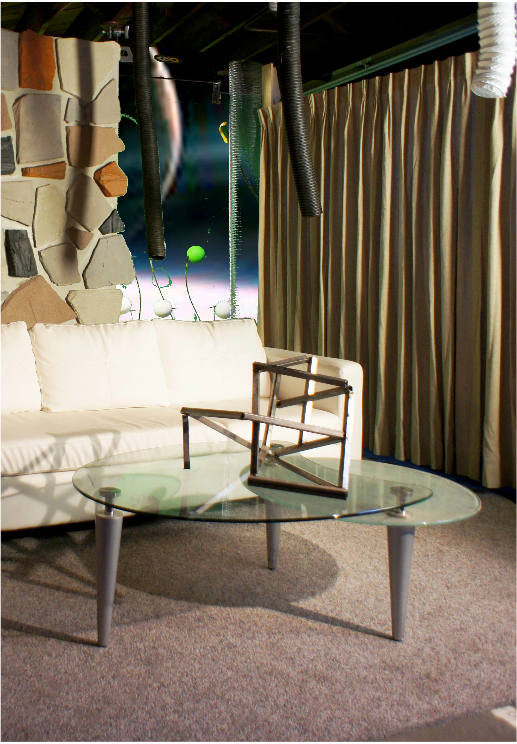 Theater Objects: A Stage for Architecture and Art is the first in a series of exhibitions that aim to initiate a dialogue between architecture and contemporary art. Co-produced by LUMA Foundation and gta exhibitions based at ETH Zurich, the show invites the latter’s renowned Department of Architecture to enter into dialogue with the city’s exhibition venues.

The impossibility of exhibiting architecture opens up a question about the medium. In an exhibition space, the prevailing notion of ‘architecture’ as represented by a building in an urban environment is hard to maintain, and the framework of architectural practice is challenged. The architectural exhibition suffers from the displacement of objects into an institutional space. It ends by functioning either as representation, by referring to something situated outside the museum, or imitation, by mimicking architecture through the creation of an atmospheric installation. Nevertheless, ‘exhibiting architecture’ has become an established genre, currently en vogue and attracting a growing public.

Theater Objects charts the in-between areas: the theatrical stage serves as an interface in which objects, sounds, projections and texts come together. The diverse contributions explore the relationship between representation and imitation, reality and fiction. Architects and artists have produced new works which reveal their different disciplines’ sources, references, influences, methods and collaborations.

About the artists and architects

6a architects is a London-based architectural practice, founded by Tom Emerson and Stephanie Macdonald in 2001. Recent projects include the extension to the South London Gallery and the Raven Row contemporary art gallery in Spitalfields, London. 6a architects have won several major architectural competitions and international awards. Recent publications include Never Modern (2013) and the Atlas project (2011–2012).

architecten de vylder vinck taillieu, the Ghent-based architectual studio was founded in 2010 by Jan De Vylder (b. 1968), Inge Vinck (b. 1973) and Jo Taillieu (b. 1971). Recent projects include numerous commissions in Belgium. Recently they participated in the Oslo Architecture Triennale (2013) and Venice Architecture Biennale (2012).

Uri Aran (b. 1977, Israel) is an artist based in New York. Recent solo exhibitions include Puddles at Peep-Hole in Milan (2014), Five Minutes Before at South London Gallery (2013) and here, here and here at Kunsthalle Zurich (2013). His work has featured in the Whitney Biennial (2014) and The Encyclopedic Palace, as part of the 55th Venice Biennale (2013).

Andrea Branzi (b. 1938, Italy) is an architect and designer based in Milan. He is the co-founder of Archizoom Associates and a contributor to Memphis and Alchimia. His writing includes Learning from Milan (1988) and Domestic Animals (1987). Recent solo exhibitions include oggetti, territori, volatili at Isabella Bortolozzi Gallery in Berlin (2013) and Open Enclosures at Fondation Cartier in Paris (2008).

Pieter de Bruyne (1931-1987) was a Flemish architect and designer based in Ghent. His works are considered as pioneer projects of postmodernism. He held a teaching position at Saint Luke’s Institute (Hoger Architectuurinstituut Sint-Lucas) in Schaarbeek, Brussels and was honored for his work in 1984 with the State Prize.

Studio Tom Emerson. Tom Emerson (b. 1970, France) founded 6a architects with Stephanie Mac-donald in London in 2001. The studio focuses on re-use and bricolage in architecture and the narrative of history. Recent projects include the exhibition Atlas at gta exhibitions, ETH Zurich (2014). Emerson studied at the University of Bath, the Royal College of Art in London and the University of Cambridge. Following teaching positions at Cambridge University (2004–10), the Architectural Association, London (2000–04), he has been professor of Architecture and Design at ETH Zurich since 2010.

Dan Graham (b. 1942, Urbana, Illinois, USA) lives and works in New York. Graham has been a central figure in the development of contemporary art since the 1960s from the rise of minimalism, conceptual art, and video and performance art, to explorations of architecture and the public sphere and collaborations with musicians and the culture of rock and roll. Recent solo exhibitions include The Roof Garden Commission: Dan Graham at The Metropolitan Museum of Art, New York (2014), Models and Beyond at De Pont Museum of Contemporary Art, Tilburg, Netherlands (2014). In 2009, Beyond, a major retrospective of the artist toured from the MOCA in Los Angeles, to the Whitney Museum in New York and the Walker Art Center in Minneapolis. Recent writings include Nuggets (2014) and Architecture/Astrology (2014). Graham has participated in the Venice Biennial, Italy (1976, 2003, 2004, 2005) and Documenta V, VI , VII, IX , IX and X in Kassel (1972, 1977, 1982, 1992 and 1997). In 2010, he was honoured by the American Academy of Arts and Letters in New York.

GRUPPE is an architecture and design practice founded in Zurich in 2010 by Christoph Junk, Boris Gusic and Nicholas Lobo Brennan. Recent projects include a timber house in Lucerne and a stone house in Ticino. In 2012 they won the Swiss Art Award for Architecture, and in 2013 they were finalists for the Debut Award at the Lisbon Triennale. GRUPPE have taught and lectured at the ETH Zurich, Gerrit Rietveld Academie (Amsterdam), The Berlage (Delft), amongst other places across Europe.

Trix and Robert Haussmann. Robert Haussmann (b. 1931, Switzerland), Trix Haussmann (b. 1933, Switzerland) are two of the most important architects, designers and theoreticians, consequential in influencing and helping to displace classical modernism in Switzerland. They have realised about 650 projects in their lifetime; in Zurich these include the Da-Capo-Bar, the new main train station, the boutique Weinberg and the Kronenhallenbar. In 2013 they were awarded with the Swiss Grand Prix of Design in recognition of their exceptional career and outstanding contribution to architecture and design in Switzerland.

Christian Kerez, (b. 1962, Maracaibo, Venezuela ) is a Zurich-based architect. His latest projects include 120m Commercial Building in Zhengzhou, China (2013), Europa-Allee, Office Building, Site B in Zurich (2011) and Zurich Insurance, Corporate Center (2011). In 2009 he was elected as ordinary professor for design and architecture at the Swiss Federal Institute of Technology Zurich (ETH). A monograph of his work and projects, entitled Christian Kerez. Uncertain Certainty, was published in 2013.

Made In is an architecture office based in Geneva and founded by Patrick Heiz and Francois Charbonnet. Recent projects inculde La Vaudoise Assurances HQ (2013) in Lausanne and Villa Chardonne (2009). They were visiting professors at ETH Zurich, EPF Lausanne and at The Academy of Architecture in Mendrisio.

Peter Märkli (b. 1953, Switzerland) is an architect based in Zurich. Recent projects include La Congiunta Giornico (Haus für Reliefs und Halbfiguren für Hans Josephsohn) (1992), Neue Orgel at Basler Münster (2003), hotel management school Belvoirpark (2014), apartment complex Gutstrasse Zurich (2013), the new company building Synthes (2012), the Novartis Visitor Center (2006), school Im Birch Zurich (2004). Since 2003 he is professor for design at ETH Zurich. His work was published in AA Monografie Approximations and exhibition catalogues such as for the National Museum of Modern Art, Tokyo, and his drawings were exhibited in Zurich, Basel, London, Copenhagen, Tokyo and Moscow.

Josep Lluis Mateo (b. 1949, Spain) is an architect based in Barcelona. Important projects include the Centre of Contemporary Culture in Portugal (2013), the New Prague National Gallery Entrance Hall (2012) and the Film Theatre of Catalonia in Barcelona (2012). He was awarded the A+ Prize 2011 and his work has been extensively published and exhibited, most recently at the MoMA New York (2006) and La Galerie de l’Architecture in Paris (2013).

Mélanie Matranga (b. 1985, France) is an artist based in Paris. She was the recipient of the 2014 Frieze Artist Award. Group exhibitions include Europe, Europe at Astrup Fearnley Museum (2014) and The Issues of Our Time at Castillo/ Corrales (2013).

Matthias Megyeri (b. 1973, Germany) works as an artist in London and Stuttgart, where he has been granted a studio fellowship at the Künstlerhaus. Matthias Megyeri was an Akademie Solitude fellow in 2008/2009. Since autumn 2011 he hold a guest professorship at the University of the Arts in Berlin.

Claude Parent (b. 1923, France) is an architect based in Paris. He is known for his concepts of l’architecture oblique. His influential projects include House André Bloc (1961) and the Church Saint-Bernadette du Banlay in Nevers (1963–1966). Recent exhibitions include contributions in the Liverpool Biennale at Tate Liverpool (2014) and at this years Venice Architecture Biennale.

Magali Reus (b. 1981, The Netherlands) is an artist based in London. Recent solo exhibitions include In Lukes and Dregs, The Approach, London (2014) and Highly Liquid, Galerie Fons Welters, Amsterdam (2013). She participated in group shows, such as Nature after Nature, Fridericianum, Kassel (2014) and Pool, Kestnergesellschaft, Hannover (2014).

Carissa Rodriguez (b. 1970, New York, USA) is a New York based artist, writer and gallerist. Recent solo exhibitions include Two Weeks (with Amy Yao) at Indipendenza in Rome (2014) and La Collectionneuse at Front Desk Apparatus in New York (2013). Group exhibitions include the 2014 Whitney Biennial and Non-Solo Show, Non-Group Show at Kunsthalle Zürich (2009).

Cameron Rowland (b. 1988, Philadelphia, USA) is an artist based in New York. Recent solo exhibitions include Bait, Inc at ESSEX STREET in New York (2014) and An Agreement at Wilfred Yang in Los Angeles (2013). He participated in numerous group exhibitions such as U:L:O at Interstate in Brooklyn (2014) and Samsonite at SWG3 in Glasgow (2014).

Stephan Trüby (b. 1970, Germany) is Assistant Professor for Architectural and Cultural Theory Technische Universität München (TUM). He was head of research of the architecture section of the 2014 Venice Biennale and is a regular contributor to the magazines ARCH+ and Archithese.

Günther Vogt (b. 1957, Liechtenstein). Over the past ten years, Günther Vogt of Vogt Landscape Architects, Zurich, has designed a wide variety of public and private outdoor spaces in Switzerland and Europe. These include the grounds of new Bauhaus Museum, Weimar (2014), the new Ricola Kräuterzentrum, Laufen (2014), the Trinity Laban Conservatoire of Music and Dance, London (2003), the Tate Modern, London (2001), the Olympic Village, London (2012), the FIFA headquarters and Masoala Rain Forest Hall in Zurich (2013) and The Roof Garden Commission: Dan Graham with Günther Vogt, Metropolitan Museum of Art, New York, 2014. Since 2005, Vogt is Associate Professor for Landscape Architecture at the ETH Zurich.

Richard Wentworth (b. 1947, Samoa) lives and works in London. He has played a leading role in New British Sculpture since the end of the 1970s. Major solo presentations include Black Maria with GRUPPE, at Kings Cross in London (2013), Whitechapel Gallery in London (2010), 52nd Venice Biennale (2009), Tate Liverpool (2005).

About the curators
Fredi Fischli (b. 1986) and Niels Olsen (b. 1989) are curators based in Zurich, and the directors of gta exhibitions ETH Zurich. Together they initiated the exhibition space STUDIOLO and the publication series STUDIOLO / Edition Patrick Frey. They have curated numerous exhibitions, including 69/96 (with Bob Nickas) at Gebert Foundation, Keiichi Tanaami, Schinkel Pavillon Berlin; Friedrich Kuhn at Herald St. London; and The Log-O-Rithmic at GAMeC Bergamo. Recent publications include Ashley Bickerton – Susie; William Leavitt. The Particles; and Trix and Robert Haussmann. Their regular column ‘Pioneers’ appears in Kaleidoscope magazine.