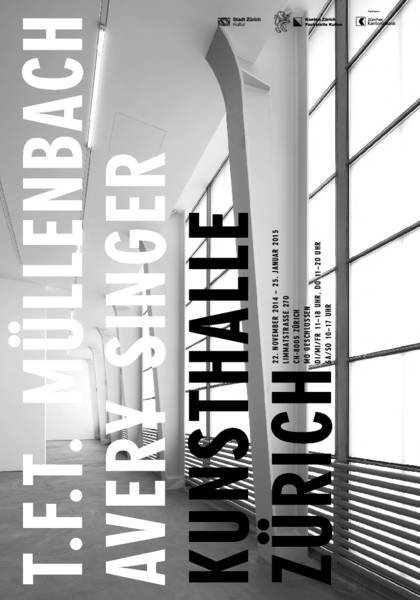 Thomas Müllenbach Thomas Müllenbach (born in Koblenz, Germany in 1949, lives and works in Zurich) turns our everyday perception of familiar things on its head, and subverts the collective understanding of the sense, purpose and value of the visible. These shifts in the everyday are the focus of his attention. In the process, he also repeatedly scrutinises the history of art and explores the possibilities of painting. The exhibition in Kunsthalle Zürich presents the first comprehensive overview of Thomas Müllenbach’s paintings and drawings with a focus on works created specially for this show and recent works, complemented by a selection of earlier works.

Thomas Müllenbach’s interest is constantly aroused by the normal and familiar – be it a jug, a bunch of flowers, a flat screen monitor, the numerous exhibition flyers sent to him, a bank lobby or a bedroom. He does not merely reproduce these things and their surfaces in these works, but captures the everyday, almost imperceptible shifts associated with them and the accompanying moments of irritation. These are the motifs that refuse to leave him alone. When selecting details from images, he omits the apparently important element only to refer to it through a supposedly unimportant one. With his images, the artist presents the viewer with fragments, in which he refuses to follow the traditional conventions of representation, allows the edges of the image to crop heads and objects, and mixes different perspectives in one work so that the viewers can discover the unknown in the familiar, and the familiar is transformed into something uncanny.

The drawing assumes an independent place in Müllenbach‘s œuvre and offers practically unlimited scope for experimentation. A group of large-format works revolves around places in which state-of- the-art technology is used – and frequently also fails. Illustrations from the daily press and specialist publications, from which he reproduces a detail provide the template for these works. Strong graphite lines outline cables, tubes, control panels and complex structures, uniting chaos and functionality and drawing the viewer into the world of high technology. Tschernobyl 1 (2004) symbolically presents one of the rooms in the eponymous nuclear power plant and thereby refers to the nuclear disaster of 1986, which resulted in the explosion of the reactor through the exposure and ignition of the reactor’s graphite moderator. A connection is established here between the hazardous nature of the material used in the reactor and the drawing medium graphite. The ominous occupation of space also plays a role in the works 3 x door to NSA (2014). Müllenbach does not provide a view into an office at the American security authority, but instead shows the closed office door, thereby conveying the importance of the location through a simple, trivial object – the door. The economic and currency graphs which Müllenbach quotes in the work DAX, 26.9.97 (1997) are also something we encounter day in, day out. The artist depicts the course of the German share index in a large-format painting and presents the graph on a green-yellow background, prompting interaction between abstraction and figuration.

In the series of works entitled Halboriginale (‘half-originals’) (2005–2013) Müllenbach transposes the numerous invitations he has received to exhibition and art events since 2005 as objects representative of the ‘everyday life’ of the art world into works of his own. The watercolours, which are presented in a comprehensive space-encompassing installation, reflect their models in their size and motifs: ranging from Dürer to van Gogh, from national to international artists and from figurative subjects to abstract fields of colour, these works play with the idea of recognisability. Müllenbach’s ‘half-originals’ are neither plagiarised nor copied, they involve the individual interpretation of technical reproductions of works of art to form new works.The small-format series Xenakis (2012) centres on the Greek composer and architect Iannis Xenakis (1922 – 2001). Müllenbach does not focus on the visualisation of Xenakis’s musical work, however, but on his photographic portraits, in which the left side of the composer’s face was always concealed by shadows or turned away from the camera – a personal decision by Xenakis, whose face disfigured by a grenade in a street fight in 1945. Müllenbach reconstructs this hidden half of the face with fine pencil strokes as a careful approximation for public presentation.

Although there is no stylistic correlation between Müllenbach’s works on paper and paintings, there is in terms of content: they all revolve around the normality of the everyday and refer to time as a quality that can be provided by prolonged lingering and the boredom of the everyday. Space is provided for Müllenbach’s paintings in the recently built additional floor of the Kunsthalle Zürich. Whereas, in the past, the artist applied motifs to wide-ranging supports using expressive and sometimes pastose brushstrokes, his more recent works are based on a reduced pallet and are characterised by the thinner application of the paint. This work is consistently pervaded by the exploration of interior and exterior space. In his Wall series, Müllenbach transfers the exterior to the interior and introduces the brick façade of the Kunsthalle’s Löwenbräu building and dry-stone walls into the museum space on large-format oil paintings. His depictions of interior spaces, be they private or public, are borne by an aesthetic of the inconspicuous presenting familiar objects in their original environment – they depict an armchair, a bed, the artist’s parental home and the standard lobbies of banks and insurance companies. The banking hall in Pictet (2007) and the view into the hotel lobby in Hotelhalle (2007) show places free of all decorative embellishments. By voiding them in this way, Müllenbach reveals the architectural structure and allows the intrinsic function of each space to emerge clearly.

Müllenbach repeatedly engages in a highly individual dialogue with the history of art. Most recently, he explored the dumbness of electronic media like monitors – and, hence also, Kasimir Malevich’s black square, the iconic work of the zero point of painting. If the black surfaces of the switched-off screens in our homes, of display boards and bearers of information in the reception area of the Kunsthalle Zürich do not immediately remind us of Malevich’s square, they do when translated into painting. In contrast to Malevich, who established Suprematism in 1915 with the painting Black Square, Müllenbach depicts the black squares in their spatial environment and returns them to the realm of figurative painting. In more recent works, Müllenbach adopts the theme of the non-finito, the unfinished work. In these works he presents blank white figures against a developed background and thus links to a visual tradition of Henri Matisse and Paul Cezanne. These “reversed figures”, as the artist calls them, populate their environment like ghosts and provide a space for projection by the viewer.

The technically and iconographically striking paintings of Avery Singer (born in 1987, lives and works in New York) thwart our visual expectations. At an initial glance, they resist a clear classification of painting or printing processes. Hence her works raise the obvious and artistically pressing question of how the digital information that surrounds us can materialize itself – be it as a flat image on paper or more recently in 3-D in plastic, or on and in every other possible material surface. Avery Singer has created a cycle of works specifically for this first institutional solo exhibition. Following its presentation in Zurich, the exhibition will be shown at the Fondazione Sandretto Re Rebaudengo in Turin (12 February – 12 April 2015).

While the analysis of painting has been an ongoing concern for Avery Singer since 2010, she also experiments and explores imaging processes. Her motifs are inspired by the seemingly infinite flood of images on the Internet. She also processes everyday occurrences and realities in her paintings and repeatedly finds inspiration in literature. With the help of the graphic program SketchUp, which is used for 3-D modeling in architecture, Avery Singer constructs complex spatial compositions filled with abstracted figures and objects. In the course of this process, the motifs are translated into geometric forms and reduced to simple elements: hair becomes zigzag lines, eyebrows straighten, arms turn into blocks and the female bosom becomes an asymmetrical polygonal outgrowth of the body. Singer projects these computer-generated sketches onto a canvas or panel, separating the forms from each other using masking tape and creating surfaces on the canvas in a grey palette with airbrush. Through their rejection of color, these works follow the tradition of Grisaille – a style of painting that featured predominantly in medieval panel painting and the Renaissance, and was frequently used for the translation of sculptures into painting. The airbrush technique heightens the planarity of the painting surface to an extreme and contrasts with the illusionistic spatiality of the image compositions, an approach that broaches and further develops questions relating to art history and perception. As trompe-l’oeils, the large-format works open up spaces that invite the viewer to walk into them, or at least risk a look behind the canvas to see whether another space lies behind it. The planarity of the canvas is also ruptured by the form of the presentation: By allowing the paintings to float freely in the space on delicate metal cables, rather than opting for the traditional wall hanging, the artist creates a spatial constellation in the exhibition by using the paintings themselves.

Both the physical characteristics and themes of Singer’s paintings always refer to the history of art and their own emergence, that is the stories and problems associated with the creation of art or images. Allusions to the motifs and styles of classic modernism and to post-modernist debates can be identified in her works. The question is also raised as to the impact of the shifts in meaning resulting from the conditions of digitality and virtuality on the artistic sphere today and, particularly also, the medium of painting. The insignias of the “fine arts” collide with avant-garde tropes, and parodic-autobiographical motifs constantly allude to clichés of the art world. Adopting a humorous tone, Avery Singer demonstrates rituals and social patterns and presents stereotypes of the artist, curator, collector and writer. In this context, she adopts the historical loci of art production– the studio, the art college and the institutional space – where the myth of the artist and cult of genius are fostered: How are artists made? How is art made? The group of people in the work Happening (2014) are trapped in the act of art production. The snapshot presented in this work is inspired by documentary photographs, which Singer regularly encounters in her research on performance art, and evokes the happenings of the 1960s. The work entitled Director (2014) also refers to artistic activity. It is a portrait of a recorder player who can be interpreted as an artist or, as indicated by the title, a director. The musical instrument, which tends to be played by children, allows the figure to become an entertainer and is reminiscent of themusician at the royal court, or even the court jester. As Avery Singer points out, the painting also refers to the idea of awareness as an internal model constructed by the brain. Just like the Pied Piper of Hamelin, whose music seduced the children to follow him, we, as art viewers, may surrender our selves to the seduction of the recorder player presented in this painting.