For the exhibition 'Sintese humanista', Guillaume Pilet proposes a wall painting creates an optical illusion of the existence of other spaces inside the walls of the exhibition space. 'The Sublime e the Dystopia' presents the works of Leticia Ramos, Andre Trindade and Filipa Cordeiro. 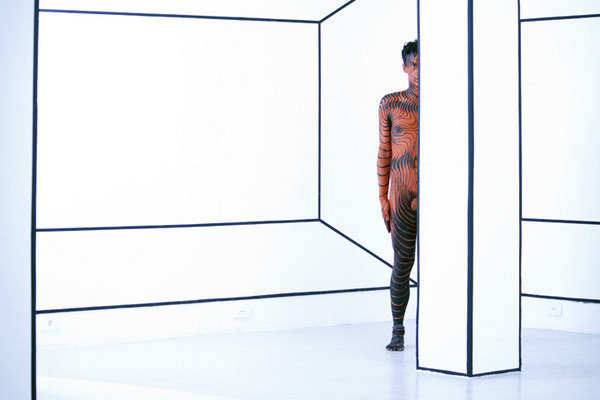 Guillaume Pilet is a very eclectic and curious artist, whose works escape styles and references, ranging from sculptures, ceramics, paintings, performances, installations, videos, wall paintings. Through his polymorphic works, that at a first glance can be taken as naive or even done by an amateur artist, Pilet critically questions the status of the art work and the cynicism existing in the art world.

Very much influenced by Gilles Deleuze’s idea of “becoming minority”, Pilet’s works resemble to be created for and in the place of someone from outside the art world, but at the same time, make allusion to art history as something that is haunting humanity, “a ghost story for adults”, as German art historian Aby Warburg wrote. Fascinated by things that he finds aesthetically strange and kitsch, the artist incorporates into his joyful and free artistic practice elements from popular culture, childish shapes, batik, body painting, representations of objects from daily life, emblematic figures, institutional critique, Pop Art, primitivism and its influence in the modernist movements, etc.

For the exhibition «Síntese humanista», Guillaume Pilet proposes a cannibalism in reverse: if – as described in the Manifesto Antropofágico of Brazilian modernist artist Oswald de Andrade – the Anthropophagic artists were “eating” the European influences, digesting them, and throwing out new things, Guillaume Pilet now “eats” the modernist architecture, the concrete art movement, the exuberant green nature, the ethnographic studies of indigenous people, and freely create his own art out of them.

The exhibition is created from the idea of bringing together different knowledges and synthesizing them into several elements. A wall painting, that refers to the modernist architecture, creates an optical illusion of the existence of other spaces inside the walls of the exhibition space. These illusionary inner spaces have their walls painted with a pattern developed by the artist as a continuation of his shaped canvas paintings, which allude to Op Art. But now this pattern is subverted by Pilet in a free hand drawing, responding to the psychedelism from Tropicalia.

The same pattern appears in the body painting – a new element that the artist add to his practice – realized in collaboration with a performer to refer to the indigenous’ body paint practice. In the Brazilian Xingu region, each indigenous tribe has its own patterns, that are abstractions of animal patterns, such as the jaguar spotted skin or the shapes in the turtle shell. By using these patterns in the body painting practice they represent those animals in cosmological rituals. Pilet photographed and filmed the performer interacting with the structural lines of the wall painting, before adding the pattern to them. The video of the performance can be seen at the exhibition and the photo shooting pictures were added to the publication that the artist produced for the show.

This publication includes also part of the herbarium that the artist created with plants he collected during the first days of his visit to São Paulo. The herbarium, which is also on display on the exhibition, reflects on the humanistic tradition of collecting, and cataloging plants in order to produce knowledge and map the environment where humans are living.

And last but not least, the artist presents a raw clay sculpture representing Lina Bo Bardi, the italian architect who very well employed the modernist concepts in the design of several constructions in Brazil. The social interaction enabled by the Brazilian modernist architecture is a very humanistic aspect that Guillaume Pilet pays tribute to. The sculpture stands on a red barrel, a ready-made that he uses as a plinth, referring to the iconic Sesc Pompéia cultural center building and its red elements, that used to be a barrel factory in former times, before it was renovated by the architect.

The Sublime and the Dystopia
Leticia Ramos, André Trindade and Filipa Cordeiro
curated by Marta Ramos-Yzquierdo

What is the space for the existence of the real? What is the place of the invention in the construction of memory and history?

The sublime, this terrifying thriller Burke, and dystopia, this projection does not idealistic in uncertain times, is the meeting point of two trips to the future, in which the earth disappears and becomes the territory of the fluctuation and the projection.

The first proposal is presented by Brazilian artist Leticia Ramos (*1976 Santo Antônio da Patrulha, RS, Brazil). The installation, which is part of the project VOSTOK (2013), takes us to an original world where everything could resume. The place is condensed in a large aquarium inhabited by a capsule launched in the year 3000 in the bottom of the lake Vostok, located beneath the Antarctic surface where the primordial molecules that originated the world survived.

The second imaginary space happens in the film Verão Eterno (2013), designed by the Portuguese duo André Trindade and Filipa Cordeiro (*1981 Oeiras, and *1988 Coimbra, Portugal) during their residence in Brazilian northeast region. The film, which is launched in Brazil in the context of the show at KUNSTHALLE São Paulo, is a science fiction story in which the Earth was forcibly abandoned by man, after a hulking industrial development.

The shadow of utopia is present in both surveys both formally, construction and image processing, as in the narrative, in the design of reports, but invite new mental journeys open to multiple alternatives beyond the predetermined reality.