Exhibition to present prominent artistic trends in new intergenerational work. Reflecting a reinvigoration of contemporary American art, at a moment of profound change in our cultural landscape, the 2004 Whitney Biennial will explore a number of interwoven aesthetic tendencies in works by an exceptional group of intergenerational artists. 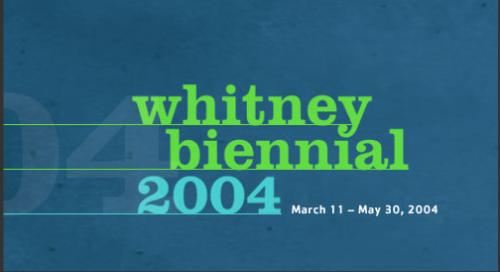 Reflecting a reinvigoration of contemporary American art, at a moment of profound change in our cultural landscape, the 2004 Whitney Biennial will explore a number of interwoven aesthetic tendencies in works by an exceptional group of intergenerational artists.

Opening on March 11th, the 2004 Biennial is being organized by three Whitney curators: Chrissie Iles, curator of film and video; Shamim M. Momin, branch director and curator of the Whitney Museum of American Art at Altria; and Debra Singer, associate curator of contemporary art. The exhibition will present works by 108 artists and collaborative groups, and will remain on view in its entirety at the Whitney Museum of American Art through May 30, 2004. The list of participating artists is attached. The show will also include several site-specific outdoor works, presented in collaboration with the Public ArtFund.

An Intergenerational Conversation
Several generations of artists are featured in the exhibition, in a conversation that reflects a number of overlapping trends:

* An engagement with the artmaking, popular culture, and politics of the late 1960s and early 1970s;
* The construction of fantastic worlds, uncanny spaces, and new narrative forms, often incorporating psychedelia, the Gothic, and the apocalyptic;
* A prevalence of abstract and figurative paintings and drawings as well as hand-processed films, frequently involving obsessive working of line, surface, and image.

Ranging from the apocalyptic to the ethereal, the fantastic to the political, and the sensual to the obsessive, many of the works convey an underlying sense of anxiety and uncertainty about the world today. The Biennial artists have drawn from a variety of sources including music, pulp fiction, the occult, recent and past art history, cinema, and current political events. A direct engagement with materials and process, paralleled by an embracing of ornament and surface, is evident throughout the show, which includes strong groupings of painting, drawing, printmaking, sculpture, installation, video, filmmaking, photography, performance, and digital art.

Looking Back
One important aspect of the exhibition involves appropriation, by which artists remember â€“ and sometimes intentionally misremember â€“ the past. Engaging with the artistic experiments of the late 1960s and the early 1970s, these artists look back on the aesthetic strategies and popular culture of a period of international conflict, domestic tumult, political scandal, and economic downturn, which formed a combustible climate reminiscent of our own.

References to radical political action surface in the work of Mary Kelly and Sam Durant, for instance, and in the documentary film The Weather Underground, by Sam Green and Bill Siegel. The sculptures of Tom Burr, Taylor Davis, Wade Guyton, and Mark Handforth, among others, appropriate aspects of the Pop and post-Minimalist approaches of artists like Andy Warhol and Robert Smithson. The rigorous abstract films of Pip Chodorov and Luis Recoder rework the conceptual language of 1970s structuralist filmmakers, while Sharon Lockhart embraces similar strategies in new formal terms.

An interest in the dreamlike qualities of 1960s psychedelia arises in the immersive installations of assume vivid astro focus, Christian Holstad, and Virgil Marti, in the paintings of Fred Tomaselli, and in the new digital film of Andrew Noren. One of the exhibition's senior artists, Yayoi Kusama, will show a recent installation that echoes her hallucinatory environments of the 1960s.

Other Worlds
Reflecting on the past as if it was "a foreign country," as the novelist L.P. Hartley put it, can be considered the flipside of another prevalent contemporary impulse: the construction of fantastical alternative realities, in which myth-making becomes a way to understand a world that has become increasingly dangerous and alien. The surreal narratives of artists such as Laylah Ali, Amy Cutler, Robyn O'Neil, Dario Robleto, and Matthew Ronay propose alternative interpretations of social conventions.

One prominent strain embraces a Gothic sensibility, in which darkness and morbidity function as a means to suggest transcendence and access to the sublime. This character is evident in the work of David Altmejd, Liz Craft, Sue DeBeer, Chloe Piene, AÃ¯da Ruilova, and Banks Violette. A similar nihilistic tendency can be found in the apocalyptic vision of Jack Goldsteinâ€™s volcanic explosions in Underwater Sea Fantasy, his first film since the 1970s and the last work he completed before his death earlier this year.

Other artists also explore the persistence of, and potential for, community and connection, from Craigie Horsfield's video installation tracking a remote rural enclave on the Canary Islands to Catherine Opieâ€™s photographs of West Coast surfers and Andrea Zittelâ€™s experimental living habitat in Joshua Tree, California.

Materiality and Process
Much of the work in the exhibition demonstrates a strong engagement with materiality and process, seen in the provocative cast-rubber sculptures of Paul McCarthy, Rob Fischerâ€™s hybrid â€œcaravansâ€ constructed from fragments of houses, planes, and cars, and in the low-tech modesty of Cory Arcangel's installations of obsolete computers and hacked video games. Terence Koh's delicately erotic objects and environments, using materials such as flowers, rhinestones, and elements of the exquisite, and Spencer Finch's spectrum-gel light arrangements, resonate with Julianne Swartz's labyrinths of lenses, fans, and mirrors. The artists in the exhibition manifest an increasingly skeptical attitude towards technology and dissipated utopian hopes for its positive impact on the future.

Drawing and Painting
Evidence of an upsurge in drawing and painting will be clearly on view in the exhibition. Large and small scale works across three generations demonstrate an emphasis on surface and obsessive mark-making, ranging from a new installation by Raymond Pettibon to Robert Longoâ€™s drawings of towering, ominous ocean waves, and from organic abstract drawings by James Siena to intimate mythological images of Ernesto Caivano.

Related to the proliferation of drawing, the exhibition underlines the current prominence of painting, from important new works by established artists such as Mel Bochner, Alex Hay, David Hockney, Robert Mangold, and Richard Prince, to work by a younger generation of artists including Cecily Brown, Kim Fisher, Barnaby Furnas, and Laura Owens, as well as the final hand-painted films of Stan Brakhage, which will be seen for the first time projected in a gallery context. The strong presence of portraiture in painting is evident in recent works by Hernan Bas and Elizabeth Peyton, seen alongside new portraits by Hockney, with whose work Peytonâ€™s strongly resonates. In photography, Katy Grannan, Jack Pierson, and Alec Soth create intensely personal portraits whose subjects seem to possess untold, hidden stories.

Scheduled Film, Video, and Performances
A film and video program will be presented, comprising hand-processed films, documentaries, performative film presentations, and narrative works by three generations of filmmakers and artists, from Jonas Mekas and Bradley Eros to Liisa Roberts, Andrea Bowers, and James Fotopoulos. Another exhibition feature will be new performances by artists including Marina Abramovic, Antony and the Johnsons, NoÃ©mie Lafrance, and Los Super Elegantes.
Collaboration with the Public Art Fund

Catalogue
The three curators have developed a new format for the Biennial catalogue. The catalogue will comprise two elements: the first, a bound book that will include essays by each of the curators, as well as more than a dozen contemporary and historical writings by a range of authors, including historians, critics, and artists such as Susan Buck-Morss, Richard Davenport-Hines, Tim Griffin, Wayne Koestenbaum, Laura Mulvey, Robert Smithson, Anthony Vidler, and a collaborative text by Rachel Greene and Johanna Fateman. The second component of the catalogue will feature projects created by artists participating in the exhibition.

The Bucksbaum Award
The third annual Bucksbaum Award will be presented in conjunction with the 2004 Biennial. In the 2002 Biennial, it was conferred on Irit Batsry for her film These Are Not My Images (neither there nor here). In 2000, Paul Pfeiffer was the first recipient. Endowed by trustee Melva Bucksbaum and her family, The Bucksbaum Award is given by the Whitney to an artist chosen from among those in the Biennial. It includes a grant of $100,000, and an exhibition in the Whitneyâ€™s Contemporary Series.

Biennial History
This yearâ€™s Biennial is the 72nd in the Whitneyâ€™s ongoing surveys of contemporary American art, begun in 1932, shortly after the museum was founded. Varying the approach a number of times throughout its history, the Whitney began by mounting bi-annual exhibitions of painting or sculpture (the latter including prints and drawings) between 1932 and 1936. Starting in 1937, two Annuals were held each year, one devoted to painting and the other to sculpture. This structure remained in effect (with slight modifications) until 1956, when a single Annual was held encompassing all media. Between 1959 and 1972, Annuals once again alternated between sculpture (sometimes together with prints and drawings) and painting. Motivated by the shifting character of American art, increasingly violated margins between traditional media, and the blurring of conventional distinctions, the present all-media Biennial system was initiated in 1973.

About the Whitney
The Whitney Museum of American Art is the leading advocate of 20th and 21st-century American art. Founded in 1930, the Museum is widely regarded as the preeminent collection of 20th-century American art and includes the entire artistic estate of Edward Hopper, the largest public collection of works by Alexander Calder, Louise Nevelson, and Lucas Samaras, as well as significant works by Arshile Gorky, Jasper Johns, Donald Judd, Agnes Martin, Bruce Nauman, Georgia Oâ€™Keeffe, Claes Oldenburg, Kiki Smith, and Andy Warhol, among other artists.

Museum hours are: Wednesday, Thursday, Saturday and Sunday from 11 a.m. to 6 p.m., Friday from 1 p.m. to 9 p.m., closed Monday and Tuesday. For information, please call 1-800 WHITNEY or visit the website.

The museum is located at 945 Madison Avenue, at 75th Street, New York City.