Domino Theory. The lower gallery presents an installation of 14 large vitrines designed by the artist and the Belgian architect, Hilde Daem. They are filled with materials sent from Port Dickson, Malaysia, where Gill lives and works. 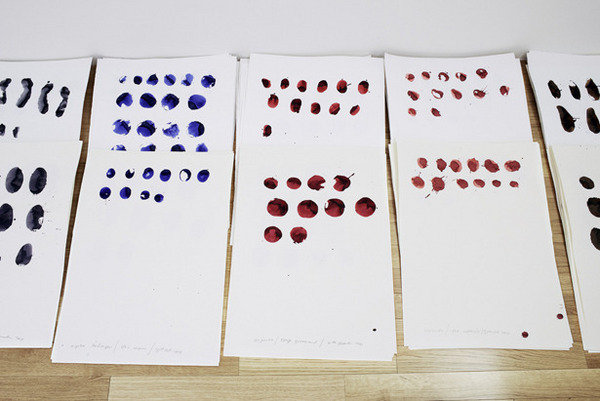 On June 4, the Espace culturel Louis Vuitton will launch IN SITU - 1, the first edition of an unprecedented open-studio program that will span three locations of the world-wide Espace network: Paris, Tokyo and Munich. Each space has invited an international female artist to join for a period of four months and will give free rein to produce new work.

During this time, the spaces transform into open studios which will allow visitors to witness all stages of the creative process — from inspiration to fruition — and experience unique encounters with the artists. While kicking off in Paris from June to September, the program will find an echo in Tokyo and Munich from September of this year to January 2015. IN SITU - 1 represents an innovating format for the Espaces Louis Vuitton on various levels. As Michael Burke, Chairman and CEO at Louis Vuitton, says: “A defined passion for creation has always been at the core of Louis Vuitton, which translates into the idea of witnessing how new work materializes and share the experience of the creative process”.
For the first edition, three female artists were chosen, continuing the house’s commitment to pay tribute to outstanding women in various creative disciplines.

In Paris, American Andrea Bowers will be given total freedom to her inspiration, while Tokyo lends its Jun Aoki-designed space to South-Korean artist Min-Jeong Seo and Munich will welcome Malaysian artist Simryn Gill in the gallery’s upper and lower levels. For both Seo and Gill , IN SITU - 1 constitutes the artist’s first major solo show in Japan and Germany respectively. The three artists will work with a variety of media and all litterally start with a “blank page“ at each location, being entirely free to choose the way they inhabit and transform each Espace.

Between September and November, the Malaysian artist Simryn Gill took up residence at the Munich Espace. During her sojourn, Gill occupied the two levels of the gallery to develop new work for her first solo exhibition in Germany.

The lower gallery presents an installation of 14 large vitrines designed by the artist and the Belgian architect, Hilde Daem. They are filled with materials sent from Port Dickson, Malaysia, where Gill lives and works. Comprising bricks, tiles, stones and corals collected from beaches, and cubes made from termite soil, they are catalogued in the vitrines based on form, material, function, size, colour and other systems known only to the artist. The work, titled Domino Theory, refers to a term coined by the US government during the Cold War, which hypothesised that if one country in Southeast Asia was seduced by Communism, the surrounding countries would follow in a domino effect. However, the serial nature and context of the installation eventually suggest that consumer culture may have triumphed above all.

The upper level of the gallery was transformed into a studio for the duration of the artist’s residency. The outcome is two series of prints made from nearly 40 types of potatoes Gill collected from local markets. Titled Let them eat potatoes, these "potato portraits"—or studies—are produced on two types of German paper from 12 shades of Louis Vuitton writing ink and presented as illustrated manuscripts. This research into the shapes of potatoes, the colours of ink, and the qualities of paper, has also extended to a series of large circular ink paintings.

The final part of the exhibition is a series of photographs titled Channel, taken in a mangrove forest on the coast of Port Dickson. At first glance the trees and bushes appear to be wearing colourful "garments," yet on closer examination, they are revealed to be entangled with plastic bags and discarded clothing washed ashore by the sea—remains of human activity which display hues similar to the inks of the potato prints, making an unexpected connection. The full set of photographs is reproduced in an artist book completed during the residency.

The program in Munich is accompanied by a collection of texts with contributions by Susanne Gaensheimer, a conversation between Simryn Gill and Jens Hoffmann, and new essays by three female writers: Katja Eichinger (for Munich), Kaori Ekuni (for Tokyo) and Christine Angot (for Paris).

About Simryn Gill
Simryn Gill was born in Singapore in 1959 and lives and works in Sydney, Australia and Port Dickson, Malaysia. Her wide-ranging practice includes sculpture, photography, drawing and writing. She works from her immediate surroundings employing often modest materials and methods in making works which are attentive to place, provenance and local and personal experience. Her most recent solo presentation, Here art grows on trees, was held in the Australian Pavilion of the 55th Venice Biennale, curated by Catherine de Zegher. Her work was included in dOCUMENTA (12) and dOCUMENTA (13), Kassel, Germany (2007, 2012) and numerous solo and group exhibitions, including at the Museum of Modern Art, New York (2014), the Solomon R. Guggenheim Museum, New York (2013), the Getty Center, Los Angeles (2011), the Museum of Contemporary Art Australia, Sydney (2008), and Tate Modern, London (2006).