Communications Department of the Philadelphia Museum of Art

'Intervals'. For the exhibition the srtists presents new and recent projects. Through films, sound, live performances, and sculpture, the artists take on various notions of the interval in order to discover possible ways to reconsider the distance between our present and our past. 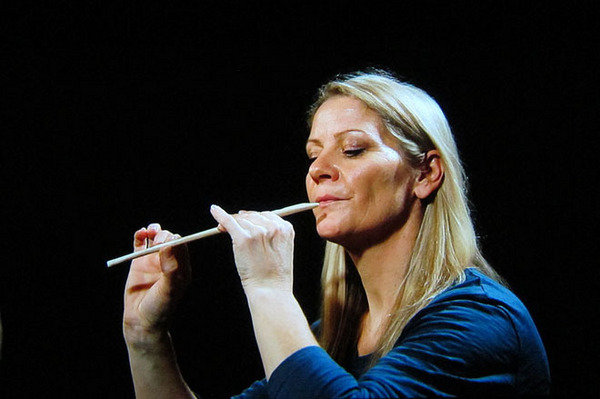 This exhibition of new and recent projects by Puerto Rico–based artists Jennifer Allora and Guillermo Calzadilla explores music’s capacity to evoke an ancestral time and interrogate what makes us human. Through films, sound, live performances, and sculpture, the artists take on various notions of the interval—the time between events, the measure between two points in space, or the range between musical notes—in order to discover possible ways to reconsider the distance between our present and our past. Allora & Calzadilla: Intervals, the artists’ largest solo exhibition in the United States to date, unfolds over two sites: the Perelman Building at the Philadelphia Museum of Art and The Fabric Workshop and Museum.

Each Allora & Calzadilla work in this exhibition stems from a cultural artifact or a vibrant remainder from various moments in history, including the oldest musical instrument ever discovered, the remains of nineteenth-century elephants, a prehistoric figurine, or fragmented dinosaur bones. Live choral and orchestral performances reimagine concerts from another century, and an intimate vocal score produces a new friction between  human presence and the prehistoric past. As archaeological exercises that unsettle linear time, these provocative works wrestle with the abyss that lies between the human experience and our evolving place within the larger universe.

Films
In the Perelman Building’s Julien Levy Gallery, a trilogy of films will be shown in sequence on three screens in an installation designed in collaboration with the artists. Each film emerged from Allora & Calzadilla’s rigorous studies of artifacts and a conceptual reconsideration of our possible relationships to them. Taken together, the films continue the artists’ exploration of the history and origins of human music and the traditional assumptions about what classifies life-forms as human or animal.

Sound Installation
A new sound-based work titled Interludes will play in the Perelman Building’s Skylit Atrium as well as at The Fabric Workshop and Museum, connecting the exhibition’s physical sites through the ethereal, ephemeral medium of breath. Interludes restores the breaths commonly muted from unmixed vocal recordings, moments that go unheard in final mastered tracks; the work reinserts these sounds into an audio sequence referencing the original composition. This sound project draws from audio recordings from the Sigma Sound Studios Collection of the Drexel University Audio Archives.

Performances
Two performances will be staged in the Skylit Atrium on selected dates throughout the exhibition:
A new choral performance, In the Midst of Things, reconstructs Joseph Haydn’s oratorio The Creation (1796–98). Haydn’s composition is based on the Book of Genesis and John Milton’s epic poem Paradise Lost, which opens in medias res, or in the middle of the story. For In the Midst of Things, the artists have embraced Milton’s nonlinear approach by subjecting Haydn’s work to a series of reversals, inversions, and interruptions. These interventions on the original musical score are mirrored by the singers’ physical movements throughout the space, poetically suggesting a reconsideration of time and the origins of humankind. For this performance, Allora & Calzadilla collaborated with The Crossing, a professional chamber choir dedicated to new music and conducte
d by Donald Nally.

A Concert for Elephants revisits a performance on May 29, 1798, in which an orchestra played to two elephants in the Jardin de plantes at the Muséum national d’Histoire naturelle in Paris. Restaging the first documented attempt to use human-generated music to communicate with animals, the performance takes place in both the open space of the Skylit Atrium and in the Levy Gallery, where it specifically intersects with the film Apotomē. For this performance, Allora & Calzadilla collaborated with Relâche, a chamber ensemble dedicated to contemporary music. Additionally, composer Christopher Rountree developed the arrangement and some original music.