Art Show Today will exhibit work of all genres and media, contributed by over seventy of our friends and favorite collaborators, including Jared Friedman, Melissa Ludin, and Knight Mohr, as well as new work from the series Chroma 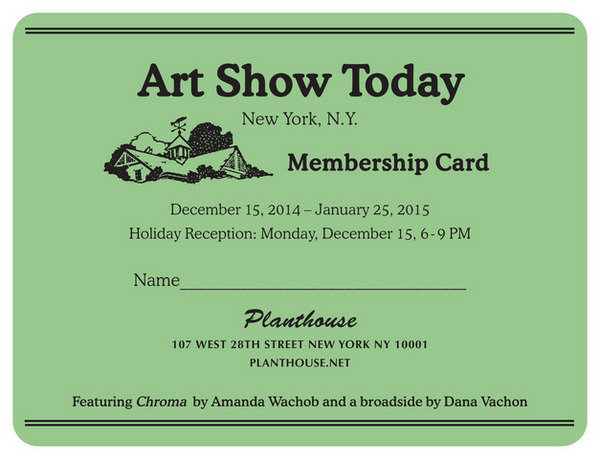 Planthouse is pleased to present Art Show Today: a salon-style exhibition celebrating the efforts of every artist, every day. Art Show Today will exhibit work of all genres and media, contributed by over seventy of our friends and favorite collaborators, including Jared Friedman, Melissa Ludin, and Knight Mohr, as well as new work from the series Chroma by acclaimed tattoo artist Amanda Wachob, and a broadside by Vanity Fair contributor Dana Vachon. All of the work in Art Show Today will be priced for sale under $350. The exhibition will be on view from December 15th, 2014 – January 25th, 2015, with a holiday opening reception on Monday, December 15th, from 6 – 9pm. Eggnog will be served.

In keeping with the ‘breadth is best’ school of thought, Art Show Today has invited the Planthouse club-house roster to submit ideas from the range of its imagination and in all acceptable media for our own private affordable art fair. There will be awards for submission and presentation in the show as well as snacks for the general public. Art Show Today marks Planthouse’s last show at our current space on 107 West 28th street and we look forward to re-opening the gallery in March for our inaugural exhibition down the street at 55 West 28th Street.

Amanda Wachob is a Brooklyn-based artist who is internationally known for her bold and innovative work with the tattoo medium. Her canvases include fruit, leather, linen, and skin. She has lectured at the Metropolitan Museum of Art and the Museum of Arts and Design in New York City, and has been a contributor on NPR and the BBC. The most recent publications of her work include the books Forever Blue and Bodies of Subversion: A Secret History of Women and Tattoo. She has exhibited in galleries and museums worldwide and has partnered with the New Museum to launch her tattoo technology project called Skin Data.

Dana Vachon is an author, cultural critic, and frequent essayist for the New York Observer, Slate, The New York Times, and Vanity Fair. He lives and works in New York City.