Association for the Promotion of Art Photography and New Media 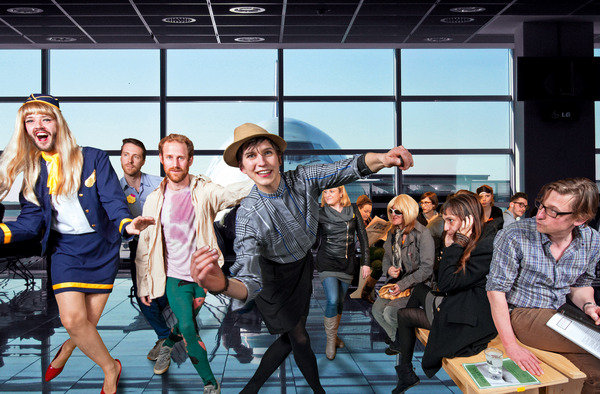 The contemporary self is under pressure. It has to assert its own capital between he technologically expansive social networks and the self-published performance record demanded by neoliberalism. The self has to be both affective and effective. At the same time there is continuous access to its increasingly de-privatised data. In this year’s special focus, BIOGRAPHY, the FOTOGALERIE WIEN is showing art works that engage with the complex issues of life experience from different perspectives. The curatorial team, working in an intensive dialogue with the participating artists who work with photography, video and film, have developed a tripartite series of exhibitions with the titles ICH, WIR and DU .

The third exhibition, BIOGRAPHY – YOU, is presenting art works that create a biography other than one’s own in a way that is protective, pleasurable, critical, analytic or deconstructive. How can a real-imaginary or documentary-fictive you become the locus of a conceivable biography? ‘I is someone else’ (Car Je est un autre) wrote French poet Arthur Rimbaud in a letter to Paul Demeny in 1871. When the you is treated as an I, and the I has always been someone else, then the you’s complexity is increased. At the same time, this is then used as the imagined site of attainable closeness and unattainable distance, activating both differences and parallels to the artist’s own biography. The art works are characterised by issues of destabilised subjectivity, questionable constructions of identity, postcolonial positioning, transvestism, operative sex changes, transgressive and queer sexuality, infractions of the norms and constructions of whiteness and blackness or speculative, nightmare-like projections

For many years Irene Andessner has been working intensively with the medium of portraiture. Until the mid-1990s her work was focused on self-portraits but from then on she involved many other people to whom she lent her face. Whether it is the renaissance painter, Sofonisba Anguissola, Mexican painter Frida Kahlo, Austrian photographer Alice Schalek or the Madonna del Arte, they have all been Andessner or the other way around – they have all been embodied by Andessner. Her re-enactments as portraits give women of the past a new face, bringing them back into the present. ‘I draw on an image of women which others make,’ says the artist. The FOTOGALERIE WIEN will be showing individual pictures from various series so that in the exhibition Andessner will be repeatedly appearing as ‘someone else’.

Alessia Bernardini works towards developing life stories from subjective narrative perspectives. The core of Becoming Simone is formed by a narration that unfolds a complex biography using the simple means of both photographs and short texts that might well be found in a family photo album. A video pages through the lovingly made artist’s book that pays attention to every detail. We see Angelina as a child, a young girl. She grows up. At the age of 51 Angelina decides to undergo an operation that will change her into the man she always was. Angelina becomes Simone. As Bernardini emphasises, her project is ‘an examination based on memories, courage, unease, dreams and expectations’. In the artist’s book past and present, discouragement and courage are overlaid in a way that is both simple and subtle.

Eva & Adele refuse to reveal any biographical details. They are the artwork. So biographical details are limited to height, bust, waist and hip measurements (in centimetres). They invented themselves. They invented their time – they are from the future. This began in 1989 and since then they have existed in mutual dependency. They are always together with their YOU, appearing together at openings, for example. The documentation of their lifes’ art work often take over others; in the studio those photos become part of the art work that is Eva & Adele. They are always identical in appearance – closely shaved heads, colourful make up, often dressed in pink. They emphasise that: ‘we combine both genders in ourselves. We work for the right of every person to determine their gender for themselves without having to be operated on’. The exhibition will be presenting the Polaroid diary – the original is 15 meters long. Each Polaroid is the first photo before they go out in public after make up and close shave. It serves the artists as reassurance.

FOURDUMMIES is a fictitious performance collective that has been in existence for a number of years and is concerned with issues of authorship and linear historiography as well as the possibilities of situational and participatory performance. Because the entire picture archive of their work was misplaced, FOURDUMMIES took the loss of their own past or, rather, the liberation from the documentary evidence of their artist past, as the starting point for a collective reconstruction. A retrospective with the title A Haptic Avatar of Visual Perfection was to have been shown at the Imagetanz Festival 2014. Now passers-by were asked for help in rediscovering the history of previous performances. The photographs of the series, Image Recovery, are the result of this process. A selection of them will be shown in the exhibition.

In her art work Sara-Lena Maierhofer combines the methods of investigative journalism employed in tabloid press exposures with those of scientific research. Fictional documentarism determines the form of the work which focuses on a biography that borders on the unbelievable. Dear Clark traces the life of an impostor and marriage swindler who lived many lives. He is the most famous con man that ever lived. Born as Christian Karl Gebhartsreiter, the names he chose to use – such as Christopher Crowe or Clark Rockefeller – seem more important. The 2010 television film, Who is Clark Rockefeller? took up his spoor and unravelled the life story of the FBI’s most wanted impostor who claimed to be a descendent of Rockefeller. In her work Maierhofer uses fiction, deception and speculation in order to question facticity as a whole. The exhibition will be presenting a photobook and selected photos.

In 2012 Anja Teske published a book, Zuckerpuppe, with her own photos and texts. The subtitle of the book is Stefan und Juwelia. They are one person and two I’s. They are familiar with Anja Teske and her camera, they are friends. For eight years the four of them, Stefan, Juwelia, Anja Teske and the camera have been working on recording their existence. ‘Photographs made and text material collected by Anja Teske’ is printed on the cover of the book. It contains an essay by Wolfgang Müller who published the 1982 manifesto of the West Berlin scene, Geniale Dilettanten, dedicated to the transvestite scene and its history. Anja Teske’s photographs show Juwelia at home in ornamental opulence, imposing colour and vulnerable transgression ‘If I achieve what I want, then I am 1000 years old writes Stefan/Juwelia. ‘He gives her the space that she needs,’ Anja Teske points out.

Stacey Tyrell uses the conventions and means of portrait photography in order to critically expose the conventional stereotypical gaze of ethnic ascription of ‘whiteness’ and ‘blackness’. The title of her work, Backra Bluid, is a linguistic combination that expresses the ambiguity and hybridisation of her photographs. Backra Bluid links the Caribbean with Scotland. Backra, white master or white person, is archaic Caribbean slang with West African roots. Bluid, blood or kinship, is a Scottish word. The Afro-Canadian Stacey Tyrell slips into the role of white, middle class women, taking on their poses, dressing in the appropriate clothes in order to underline the palpable reality of the women and girls she depicts. By incorporating the historical conventions of painted portraits in her project Western imperialism undergoes a subtle clarification.

In her work – drawings, installations and videos – Stephanie Winter is concerned with questions of fiction, memory and consciousness. The title of her work, Der Doppelgänger, is a reference to Heinrich Heine’s poem of the same name that was published in 1827. This was included in the book of songs part three, Die Heimkehr and one year later was set to music by Franz Schubert in Der Schwanengesang. Stephanie Winter’s Doppelgänger, a 14 minute film shot on 35mm film, was made in 2009. ‘Upon seeing his face, I am terrified. / The moon shows me my own form! / O you Doppelgänger! you pale comrade! / Why do you ape the pain of my love.’ (Heine) Winter’s protagonist is a traveller who, although he just manages to get a seat in the train at the last minute, only journeys towards his own inner turmoil. His introspection leads to dreamlike faces, dark forebodings and fantasies. There is no escape.

Petra Noll and Elke Krasny, for the collective