This exhibition exposes new paintings by the artist, known for his virtuoso realistic style. Gil Haller's series of frozen images was inspired mostly by a personal archive his father left behind. 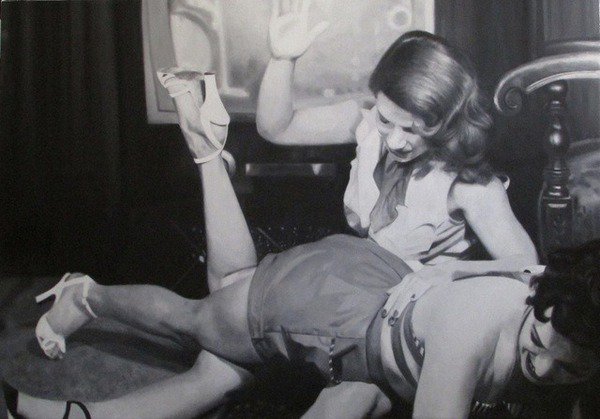 After years of an intensive work process, Artstation Gallery is proud to announce the opening of a wonderful solo exhibition by artist Gil Haller. This exhibition will expose new paintings by the artist, known for his virtuoso realistic style.

Gil Haller's series of frozen images was inspired mostly by a personal archive his father left behind. While cleaning out his childhood home after the death of his parents, Haller found boxes upon boxes his father kept of old family pictures and pieces of newspapers and magazines, piled together without any chronological or conceptual relation.

Drawing from this personal archive, and afterwards also from other sources, Haller began pulling out images that touched him in an intuitive way, building new connections without regard for the original sentiment or nostalgia attached to them. In the act of painting these images in a precise and hipper-realistic style, he detaches the image from its original context, from the place or year where it was photographed, from the magazine it was clipped from, and even from his own family's story. The detachment creates a sense of rewriting of history, blurring the line between the personal and the collective

By using a wide greyscale pallet he creates a sense of even and remote treatment, an archetype of old family photographs and an artificial nostalgia. At the same time the immediacy of the images invites us to experience these moments in the present time and they become surprisingly contemporary.

Haller's father, a Holocaust survivor, has always educated him to look beyond the perpetuated stereotype of the weak, scholarly Jew. While working on this series, Haller found himself searching for the strong hero figure, filling his role in the fictional autobiography that he creates. His images capture olympic athletes and past heroes alongside marginal character, in intimate moments or in public highlight moments, creating an additional blurring of borders in his work.

We dive into these images with Haller, playing all parts in his recreated story, until through the detachment and distantness we are exposed to the intimacy and yearning in the heart of his works.

Gil Haller lives and works in Jerusalem. He received his art education through the Hershberg Jerusalem Studio School and the International School of Art at Umbria, Italy, in the Jerusalem print shop with Sharon Polyakine, and sculpture studies at "Create a space" with Paul Harrison Taylor. Heller had solo exhibitions at both Artspace Gallery and Agripas 12 Gallery in Jerusalem. He has also shown in group shows in Israel and abroad, including the ME Contemporary in Copenhagen, Espace Pierre Cardin in Paris, G8 Gallery in Umbria, Italy, and Stern Gallery, Tavi art gallery, and Artstation Gallery in Tel Aviv. He presented at art fairs Preview Berlin, Swab Barcelona, and Fresh Paint in Tel Aviv. His work is found in several museum and private collections in Israel and abroad, including the Israel Museum and Yad Va Shem Museum.